HOW TO USE DINGBATS TO CREATE A UNIQUE TEXTURE 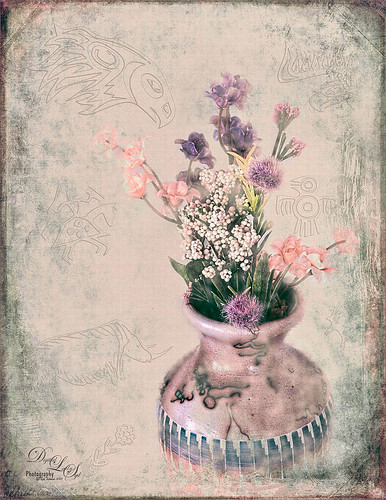 The image above is of my beautiful Navajo horsehair pottery that is hand-etched – I got it at the Native American Festival a year ago and added some flowers for this photo. Several dingbat figures were placed in the background to add to the rich Native American theme. So what exactly is a dingbat? Well, it is the same thing as a text font except instead of adding letters to a line, you are adding images. For this particular shot, I created a separate document that showed what pictures you get with each letter you press – both with caps tab on and off – to see what is in the font. If you have a font manager, this will work as well. Sometimes the numbers and special characters even have pictures attached to them so always check them out also. Cave Painting Dingbats and KR NA Dings were used in this image. There are dingbats for just about every occasion you might need and are usually found at most font websites.

How to Add the Dingbats to Your Image:

1.  In a separate document each dingbat to be used in the final image were placed on separate text layers, then put the text layers into a group (select all the text layers and CTRL+G), duplicated the group (CTRL+J), and last, right clicked and selected Merge Group. The dingbats now all appear on a single layer with no background – just the characters. This layer was copied into the image the characters would be used in. Each dingbat was selected individually with the Lasso Tool, then CTRL+drag to where it should appear, next Free Transform it (CTRL+T) to change the size and orientation and possibly warp, and finally CTRL+D to deselect. If you do not want one that you thought you might or it runs into your subject matter, then use the Lasso Tool to select it and press BACKSPACE key to delete it. Once the items are placed around your subject, in this case the pot and flowers, a layer style can be added.

Below is an earlier Tidbits Blog that I created a year and a half ago that uses the same principle using dingbats, so I thought I would repeat it since many of you may not have seen it.

This beautiful cat statue was located outside the door to the breakfast buffet at the Hilton Waikoloa Village on the Big Island in Hawaii. After initial processing in Lightroom, the image was brought into Photoshop where French Kiss Bohemian Texture, a free download, was added behind the cat image. A black layer mask was added to the cat layer and the cat image was painted out with a white brush – it was refined by going into the Properties panel with the mask selected and clicking on the Mask Edge button to smooth out the selection. French Kiss Grunge No1 Chateau (a free download of PNG brush overlays) was placed on a layer above the texture but under the cat, and a brown Solid Color Fill Adjustment Layer was clipped to the layer (go to Layers -> New Layer -> Solid Color Fill and check Use Previous Layer to Create Clipping Group). The overlay was set to 69% opacity. Just above this layer another French Kiss overlay – Bohemian Template Overlay was applied (in set with Bohemian Texture download) with another Solid Color Fill Adjustment layer added using a soft cream color. The overlay texture was set to 48% opacity. Next above the cat image, French Kiss Artiste Impasto Texture (not free) was set to 32% to get a textured look on the cat – my own free gray Cat Painting Texture would probably work just as well. Now what was really neat is how I got the interesting animal and markings effect – they are from Tangaroa Dingbats font. By adding a layer style (double click on the layer) and selecting the Inner Glow with the default settings, and Pattern Overlay using my free Digital Lady Syd’s Smudge Texture as a pattern set to 258% scale, you get the soft orange-brown look. (To create a pattern from a texture, just open it up in Photoshop and go to Edit -> Define Pattern and it will appear at the bottom of your patterns list.) A separate text layer had to be created for each of the three objects selected and each text layer was set to approximately 30%. The Sharpen Tool was used on New Layer to sharpen the eyes just a little and that was it. I think it turned out pretty nice and it was a lot of fun to create.

This is a great way to create textures also – you do not have to use dingbats or text, any brush is fine. It can get quite creative with a little practice. Try out using dingbats in your images to add a little different look to a texture. This is particularly handy when you cannot find that clip art or Photoshop brush you are looking for, there just might be a dingbat font that would have what you need. Have a good week!….Digital Lady Syd

This entry was posted on 04/05/2014 by sydspix. It was filed under Photoshop, Textures and was tagged with Dingbats.