JUST PAINTING IN PHOTOSHOP AND HAVING FUN! 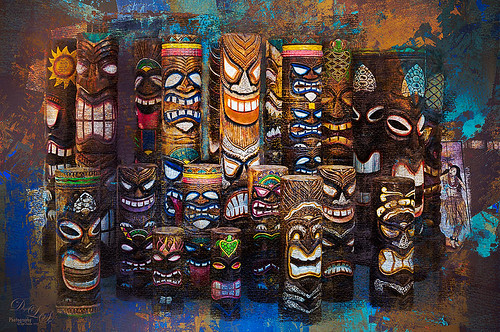 This week is all about just having some fun painting – which is why I do anything in Photoshop! Thought I would pass along a few tips that occurred to me while painting away this week. This image is of some really beautiful wood totem poles that are in front of a store in St. Augustine, Florida. Had to take the image! The colors were marvelous!

This is an example of how to use your new brush skills to remove areas in your image – the texture was used to hide a very messy and distracting background and the basic objects were painted a little but kept in tact so you can appreciate the detail of the pieces. Since the last few posts have been about creating some nice brushes, this image used the one created for the first image in How to Paint with a Texture Brush blog. I like this brush because it contains a whole bunch of texture. If you want a more obvious texture in your brush, increase the Depth slider. What does this do? Well basically by setting to a high level, the deepest areas of the texture would not get any paint; set to 0% means that there really is no different between the high and low parts of the texture and very little of it will be seen in the brush stroke. The Depth Jitter adds some randomness to the brush texture in the stroke.

Lots of clean up was done before starting on this image – need to get any distractions out of the way and clone in areas that are covered up. Saves a lot of time later. In this case all the bottoms of the front totem poles had to be reconstructed and many had white sales tags on them. Note – Open up that Clone Stamp Panel and click on icon in front of the W – this reverses the direction of what you are cloning – totally useful to help with reconstructing a missing area. Added on top Melissa Gallo’s August Copper texture. By using a layer mask to paint back the totem poles, a pretty nice painterly effect is achieved. This is actually a very popular technique used whenever a texture is added. (See my Texture Resources – So Many Choices! So Many Choices! blog.)

Another tip is do not forget to try some of your plug-ins once you have got the image close to finished. I have often created much better results by doing this. This image used Nik Viveza 2 (one of my totally in-disposable plug-in) and Nik Analog Efex Pro 2 (another favorite) as a black and white layer and set to Overlay blend mode at 86%. Viveza let me make the faces a little sharper where I wanted to direct focus and add some slight vignetting in the corners. My last step involved adding yet another texture, August Marble also by Melissa, and setting it to a Color Burn blend mode at 52% layer opacity – and no layer mask this time.

So in this case we found that painting is not that much of the process – need to really clean up the image, use  your plug-ins wisely, and find a perfect texture to hide distractions! Always be on the look out for that great texture!
….. 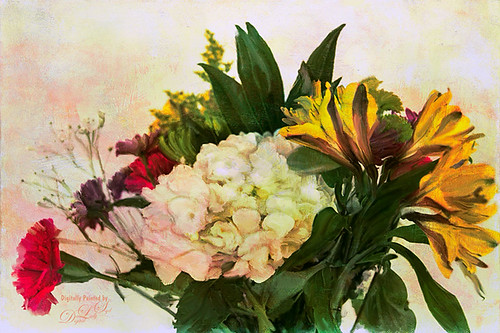 This bouquet is of an image I actually put a white background behind and shot with natural light. All that was done on this image is to just paint on a New Layer on top of the flowers using a Mixer brush. First Seim’s (see sidebar at my Tidbits Blog for website link) PW4 Super HDR X preset was added to add some contrast and sharpen the image a little. In Photoshop I converted the image to 8-bit (Image -> Mode -> 8 Bit) and made the image smaller since I was going to use a Mixer brush to paint and it is common knowledge that these brushes slows everything down – a lot! Usually this works along with keeping the brush size pretty small. This image just used Photoshop’s default Flat Fan Single Bristle Wet Edge brush at 25 pixels as a Mixer brush. The Options Bar was set so the “Load the brush after every stroke” icon was turned off – do not want to add any color – and Sample All Layers turned on. Set the Wet to 100%, Load 1%, Mix 100% (want to mix our colors up), and Flow 100%. I could have used the Very Wet Heavy Mix, in the drop down which increased the Load to 50% – not sure it matters at this point since no color is being loaded. Now just dabbed and stroked away to my hearts content on this image trying to keep my focal point in mind and not overdo that area. Two texture layers from French Kiss (see sidebar at my Tidbits Blog for website link) were added – the Atelier Valley set to Hard Light blend mode at 35% and Tableaux Mirage set to Vivid Light at 67% layer opacity – no layer masks were added. A New Layer was created and set to Overlay – then with a dark greenish brush set to 19% brush opacity, some of the lines in the flower were painted back to emphasize the separation in my focal area. (See my The Best Dodging and Burning Technique! blog.) Another New Layer was added where the Mixer brush was used to just add some extra strokes in the leaves – if the texture that was added is too strong, this can be blended into your strokes to make this less obvious. It just cleaned up some of the painting. A Curves Adjustment Layer was used to add back some of the contrast when the textures were added. A stamped layer was created and now I decided to go into Topaz ReStyle just to see if I could improved upon the color palette. The Thistles and Bright Sky preset was used (here are the setting if you are interested: ReStyle opacity 55%; Hue Secondary 0.30, Third 0.38, and Fifth 0.86; Lum Primary -0.33, Third -0.09, Fourth -0.33, and Fifth -o0.37; and Sat no changes; Texture 0.86; Basic Opacity 49% at Color blend mode; Color Tint -0.56 and Saturation 0.03; Tone Black Level 0.20 and Midtones -0.30; and Detail – Structure -0.42 and Sharpness 0.20.) Another Curves Adjustment Layer was added and by dragging in the focal flower area, more contrast could be added. By filling the layer mask with black, just this area was lightly painted back until it looked just right. It took a lot of steps but it ended up creating a very nice result! Used a similar process but different brush in my Tidbits Blog called Red Carnations on a Bright Sunny Texture.

Here’s a little tip I wanted to pass along – actually found this in the Photoshop Manual’s shortcut key section and it is a real time-saver when changing brushes. In the Preset Brush Panel pressing the “.” (period key) takes you to the next brush in the list and the “,” (comma key) takes you to the previous brush. You can skim through all your brushes very quickly by just pressing these keys. Also, by pressing the “<” key, you are taken to the first brush in your preset list and the “>” takes you to the last one. This is very handy since every time you create a new brush, it ends up at the bottom of the stack , and if you are like me, there can be many brushes in your list – so just press the > key and it takes you to the last entry quickly.

Well that’s it for this week. Maybe you picked up a couple new brushes or tips to try. See you next week!…..Digital Lady Syd

This entry was posted on 08/09/2014 by sydspix. It was filed under Photoshop Brushes, Textures and was tagged with Nik Analog Efex Pro, Nik Viveza 2, Photoshop Painting, Topaz ReStyle.