HOW TO ADD BRUSH STROKES TO PERK UP A BACKGROUND 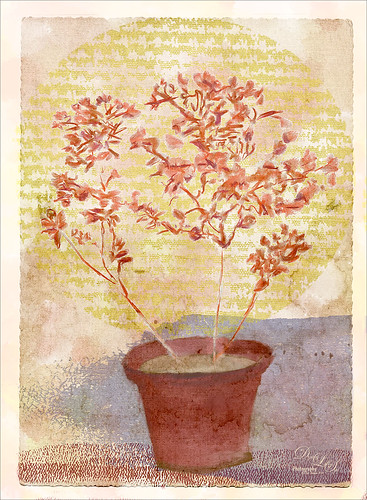 First of all, I am taking a little break from blogging as I have some wonderful overseas guests arriving for a month, but I will try to pop in with a few shorter blogs. This week’s topic is not that ground-breaking, but sometimes there is a need to perk up a basic photo. You do not have to add a really fancy texture, sometimes just a well placed brush stroke or two will give your image that added interest and personalization it needs. Painterly looking brush strokes have been added behind the main subjects to get a more unique look than just adding a basic texture or two. So here are a couple examples on how to do this. All you need is to either create some interesting marks and save them as a Photoshop brush (on a small sized document in 8-bit mode, make or combine brush strokes using black for the brush color, then go to Edit -> Define Brush Preset and it will appear at the bottom of your Brush Preset Panel), or download brushes from the Internet (to Load, go to the pop-out at the top of the Brush Preset Panel, select Load Brushes and find where you downloaded them, and click Open – they will appear at the bottom of your Brush Preset Panel) – some of my favorite downloaded brushes are linked in the text. One of my goals with this blog has been to help readers find resources to create interesting images.

This pot of flowers was shot on Green Turtle Cay in The Bahamas. It is a very simple object, but by adding some interesting brush strokes in Photoshop, it becomes a much more interesting image. My workflow for doing this is as follows.

1. My first step was to paint the flowers in Painter – no reason this could not have been done on a New Layer in Photoshop with a regular brush or Mixer brush – just sort of colored in the flowers and stems, and on another layer above the pot. For you Painter people, the flowers and stems were painted following the video Painter Cloning tools with professional photographer and digital painter Melissa Gallo and using the Coarse Sargent Jitter brush as a cloner brush to just paint in the flowers and stems. The original image was used as the source and an inverted version as a second source to paint in the darker leaves. The pot was painted using Melissa’s settings for the Luscious Oil Paint brush. The file was saved as a PSD file and opened in Photoshop.

2. This next step is important if you used Painter to paint the subject(s). In Photoshop first duplicate the flower layer. Using the Color Range command. Just remember when selecting in this dialog that the white area is the selection – if you select the background because it is easier to select, just check the Invert box before saying okay. While still showing a selection on the image, add a layer mask to the flower layer -the mask will pick up the selection showing just the flowers. There are other ways to create a selection and they work fine, just be sure to add the selection to a layer mask. You could click just CTRL+J to add them to a separate layer which is fine also. I like layer masks so I can check to make sure everything is included in the selection before the background is eliminated. It is also easier to clean up bad edges in a layer mask. Then right click on the mask and select Apply Layer Mask – now flowers are isolated.

For Photoshop folks, your subjects should have been painted on a New Layer(s) above the image, so you do not have to worry about selecting your objects.

3. You do need to add a New Layer over your original image and fill it with white to isolate what you selected. (Select white as your foreground color and ALT+BACKSPACE to fill.)

4. For both Painter and Photoshop subject, New Layers are added in which different strokes in different colors and opacities can be created. Three New Layers were added underneath each with a different stroke in different colors: The brown bottom color was a pastel brush I had, the blue paint was a Creative Toons watercolor brush (these were free from Photoshop Creative Magazine No. 113), and the yellow circle behind the flowers was created in my Texture Brush Video on You Tube and set to 46% layer opacity – yellow is a very strong color so it has to be tamed a bit. The Pot layer was selected and a Hue/Saturation Adjustment Layer was clipped to it to get just the right color. Each of these layers can be moved around using the Move Tool (can highlight layer in Layers Panel and press the CTRL key to turn cursor into the Move Tool). I am finding large watercolor brush strokes are very nice for this technique.

The following steps are all just cosmetic – you can do anything you want at this point. For the above image, underneath all the brush layers one of my free textures created a while back called Digital Lady Syd’s Smudge Texture was added as a layer and set to 23% layer opacity, which is why there are some very light soft colors in the border. On the next layer flowers that were selected – a layer mask was used to clean up some of the halos in places around the branches from the rather rough selection. Next a little Sketch Brush was selected and the pot was lightly sketched around and the dirt in the pot was given a little more definition. On a layer above it, a round soft brush was used to smooth edges of the pot. Next 2 Lil’ Owls Studio’s (see sidebar in my Tidbits Blog for website link) Vintage Frame 2-frame 15 was selected – the creases in the texture were painted out as it was distracting and it was set to Linear Burn at 97% layer opacity. In the layer style, the Blend If This Layer was white tab was split (ALT+drag to split) and set to 158/218, and the Underlying Layer black tab was split and set to 73/126 and white tab split and set to 239/255. The last step was to add a Curves Adjustment Layer to add a little more contrast. It really gave the image much more interest by varying the size, color and opacity of the layers. The image now has a lot more interest and the background strokes look very natural. 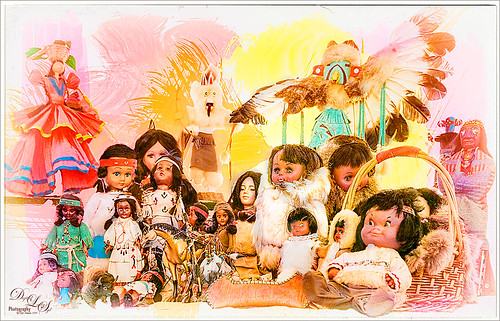 Never been really excited by the doll images I took from the Native American Festival this year, but still had fun post-processing them. This was one of those images you were just not sure what you would end up with! In Lightroom added Seim’s (see sidebar in my Tidbits Blog for website link) PW4’s Super Hero X – WhiBal preset. In Photoshop did a Perspective Warp first thing since the doll shot was not taken straight on – I was able to segment it into two pieces and straighten it up fairly nicely. Next on a New Layer did a Clone Stamp clean up for the ugly image edges I got from the Perspective Warp. Created a Stamped layer on top (CTRL+ALT+SHIFT+E) and ran a Photoshop Shake Reduction filter.

Instead of painting this image, I wanted to just separate the dolls from their background which was really distracting. The white background was selected again using Color Range and adding a layer mask containing the selection. The Mask was applied and a lot of areas were added to it to get this image clean. (Color Range had selected not just the background but some of their clothes and parts of their faces, so in the mask these areas were painted back to white so they would show up on the layer.) The following step is basically the same thing as adding the various New Layers and adding strokes, if you create the texture yourself. My Pastel Watercolor texture was placed behind them and stretched out by Free Transforming the texture layer CTRL+T to make it fit right. For a free jpg download of this texture click here. Making a similar texture is very similar to what was done in Step 4 above when adding brush strokes layers above. In this case a New Document was created – I used 12 X 9 inches at 240 ppi. Next free brushes from bittbox called BB Watercolor II Brushes need to be downloaded – these are really pretty watercolor brushes I have used for years. On a New Layer Sampled Brush 19 was painted in a pink tone on the right and with 48% layer opacity; next on another New Layer Sampled Brush 14 was applied in orange with a layer opacity of 100%; next New Layer used Sampled Brush 1 on top of last brush stroke and set to 74% layer opacity; another New Layer with Sampled Brush stroke 3 in a different pinkish tone was added at 66% layer opacity; another layer using Sampled Brush 8 in yellow at 77% layer opacity; and finally a bright pink stroke on another New Layer set to 71% layer opacity – all at Normal blend mode. You can now move the whole document into the one your are working on, or individual layers with the unique strokes. The strokes can be moved around on each layer to adjust them just right or use a Free Transform to stretch out the stroke or warp it. Totally functional! And fun to do. I have used this texture a lot for my backgrounds and these brushes are really nice. By saving your texture as a jpg, it can be used like other textures that people make.

The rest of the post-processing is the following. For some reason I have been using the Nik Analog Efex Pro 2 filter (see my Digital Lady Syd’s Favorite Preset for Nik’s Analog Efex Pro with a few adjustments in the Detail slider including several control points on the individual dolls and the Luminosity curve). On a New Layer the Sharpen Tool was used to sharpen a few of the facial features. In Nik’s Viveza control points were added to drawing the eye toward the doll in the white coat in the middle. The Camera Raw Filter was further used to direct colors correctly in the image and a Radial Filter was used on the center doll. Then localized adjustment layers were added to pin-point areas I wanted corrected in the image. By filling adjustment layer’s mask with black (CTRL+I in mask) and painting back with a 30% opacity brush, areas that needed a color shift could be added. (A Color Balance, Hue/Saturation, and two Curves Adjustment Layers were added.) A New Layer was added on top and with a soft round brush set to 12% layer opacity, a couple of the dolls faces were painted over as they were too bright – the layer was set to 47% opacity. That was it – I really loved the doll with the bright orange-red dress on the far left and the feathers on the bird on the right!

I hope this has given you some ideas on how to create some interesting background easily – sometimes the easiest things are often overlooked. I think this is a pretty fun way to make new textures and to perk up some ugly backgrounds. Hope you have some fun experimenting! See you a few!……Digital Lady Syd

This entry was posted on 09/13/2014 by sydspix. It was filed under Photoshop, Photoshop Brushes, Photoshop Filter, Textures and was tagged with Nik Analog Efex Pro, Texture Backgrounds.