GETTING BACK TO PLAYING IN PHOTOSHOP 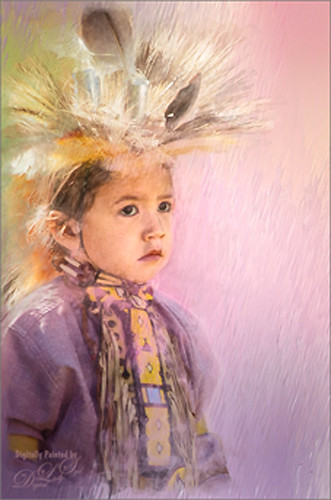 Since I had a pretty busy week with company, just thought I would post a couple images. This one is of a beautiful little girl who was dancing with the adults at the Native American Festival earlier this year. Totally enjoyed the event once again! For this image a selection was used to remove her from the background (used Photoshop’s Color Range and then cleaned up the resulting layer mask) and next ReFine Edge to fine-tune the feathers (set Radius to 7.2 and Shift slider to -3). Painted Textures Spring Rain texture was placed over the image and a layer mask was added to paint in the little girl. Photoshop’s Flat Fan Thick Stiff Wet Edge brush (located in Photoshop’s Wet Media Brushes group) was used to do this and to paint on several additional New Layers. A smaller sized Mixer brush was used to smooth the facial skin hard edges. The last step used Nik’s Viveza 2 with a control point placed on the little girl to make her pop out a bit from the background and 6 other control points to adjust the coloring to look just right.

I know that Corel Painter does a fabulous job on painting images, and I am working hard on learning it, but sometimes I like a more realistic painted feel by using Photoshop and its Regular and Mixer brushes on different layers as shown above. 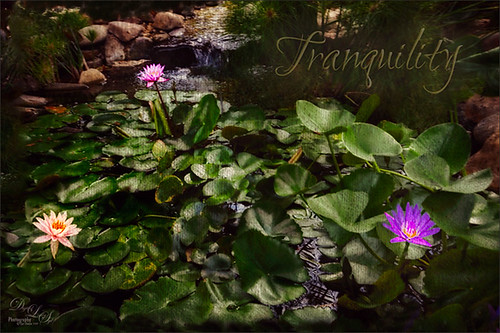 This is an image taken from the Living With the Land ride at Epcot, Disney World Orlando. Just enjoyed playing with different filters to see if I could make it into something I liked. No painting here. In Lightroom used Seim’s (see my Tidbits Blog sidebar for website link) PW4 Magic Portrait preset and actually went into the Lens Correction Manual and changed the Distortion, Vertical Horizontal and Aspect sliders which resulted in some extra white space on the left side and bottom of the image. Next opened up the image in Photoshop CC 2014 with the new advanced Content-Aware Fill command which did a wonderful job of adding into this area of the image. I do not usually use this version since the regular CC still lets me use my flash panels. Topaz (see my Tidbits Blog sidebar for website link) Detail 3 was opened and my SJ Text preset was added. (These are the settings: Overall Detail – Small Details0.08, Medium Details 0.20, and Large Details 0.08; Tone Exposure -0.60, Contrast 0.25, Highlights 0.10, Shadows 0.05, Whites 0.10, and Blacks 0.05; and Color Temperature 0.10, Tint 0.03, and Saturation 0.10.) On a stamped (CTRL+ALT+SHIFT+E) layer, the Nik’s Color Efex Pro 4 was opened and three filters were used: Midnight using a Neutral Color Set at 93% opacity, Darken/Lighten Center at 59% opacity, and Detail Extraction with Detail Extraction slider at 65% and control points set on each of the flowers only. I liked what I was seeing at this point but still decided to do some more changes. Several clean up layers were added and then Nik Viveza 2 was opened up to add some extra contrast to the flowers. Next my free Cat Painting Canvas was set to Overlay blend mode on a layer above. And just because I could, Topaz ReStyle was opened and the Dark Goldenrod preset was added with no changes. The tone in the image turned out to be just right. A text layer was added using a font called Ruthie and set to Bevel and Emboss and Outer Glow layer style. It was 27% layer opacity.

It was fun to just play in Photoshop for a change. It seems that there is so much to learn that it is easy to forget to create and have fun. Until next week, have a good one creating!……Digital Lady Syd

This entry was posted on 10/11/2014 by sydspix. It was filed under Photoshop Brushes, Photoshop Filter and was tagged with Nik Color Efex Pro 4, Nik Viveza 2, Topaz Detail 3, Topaz ReStyle.