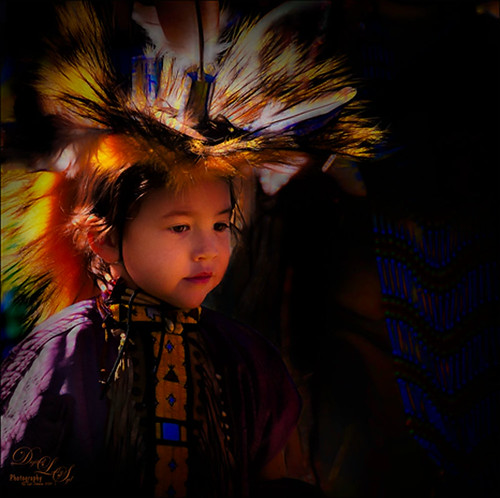 This week Topaz (see sidebar at my Tidbits Blog for website link) released their newest plug-in, Glow, and it is once again so fun and unique! I will say right from the start that if you like plug-ins and filter effects in Photoshop, Topaz has the best selection to chose from. They are raising the bar with their new innovative effects to be used in your images. Topaz Glow is so unusual and I did not think I would like it that much – what can I do with it? But after using it for awhile and combining it with some of their other plug-ins, it is becoming one of my favorites. It brings out detail, color and lighting to get some very nice results. So lets see what we have here.

On the image above, of a beautiful little Native American child, is a good example of the use of color and lighting effects to get a lovely result, especially in the headdress area. First used Topaz Clarity’s Skin Smooth and Brighten II preset (these settings were adjusted: Dynamics Micro Contrast -0.36, Low Contrast -0.41, Medium Contrast -0.09, and High Contrast 0.19; Tone Level – Black Level 0.05, Midtones 0.06, and White Level 0.28) for a more natural skin look that this plug-in does so well. Next Topaz Glow was applied using one of my favorite presets, Mysterious I (these settings were adjusted: Overall Saturation 0.22; Red Saturation -0.63 and Red Lightness 0.23; Orange Hue 0.24 and Orange Saturation 0.62; Yellow Saturation 0.46; Blue 0.66; and Purple Saturation 0.68. Set to Multiply Blend Mode at 100% strength). This preset makes the image very dark as it uses a Dark Glow Type. By setting the blend mode to Multiply, the beautiful color and sharpening in the feathers of the headdress is achieved. A layer mask was added and with a soft round black brush, the face was lightly painted back so the filter did not apply to the face.  Several clean up layers were used and a Curves Adjustment Layer was applied to create a black vignette effect by just dragging the top right dot straight down to the .25 line. The face was lightened just a little bit more using the Camera Raw Radial Filter. That was it. There was not really much manipulation to get this nice result. And what is really nice is that the effect is apparent just in the rather straight lines of the image, but it does not look like just a neon application or over-sharpening of the image. Since there was such a drastic change done on this image, the original is shown below for comparison.

I am finding that using images with lines in the objects work well with this program. Glow can really bring out the details that you did not realize were present. I seem to prefer the effect on flowers and grasses, 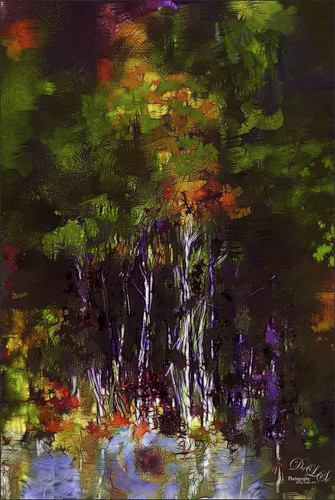 This image was done just a little differently. It was first painted in Corel Painter using oil brushes where several sources of this same image were used to get a very colorful and illustrative final result. In Photoshop Topaz Glow was added and the Mysterious II preset selected with a few changes. (Changed Secondary Glow to Dark and set Fractal Strength to 0.20, Red Lightness to -1.00, and Sharpness 0.27. Strength 0.82 and Multiply blend mode.) By using the Secondary Glow, the effect could be emphasized even more to create this rather illustrative effect. On a stamped layer Topaz ReStyle’s Dark Goldenrod Sunset preset (Detail Structure 0.50 and Sharpness 1.00) was applied. I was really please how Painter worked with Glow.

1. Love the totally unique effects this plug-in creates! Like I said, at first I was not sure how I would use it, but once I got the feel for what the different collections (6 collections and 50 presets) are doing, it became much easier to figure out and get the subtle looks I like.

2. I have an older computer and this plug-in zipped along really nicely when adjusting the large number of sliders (over 70) that were required to get the effects I liked.

3. The results actually work very nicely with several other plug-ins I like to use a lot, especially Topaz Impression and Topaz ReStyle. Below are examples of each of these being used with Glow.

4. Having a duplicate set of sliders to use as a Secondary Glow makes it very useful to fine-tune an effect. I am using this more as I get used to what the slider do.

1. There is not an undo function. It makes it a little hard to compare the old setting to the new setting. The company is promising this will be in the update for the program – which by the way, is always free to people who have purchased the program. Maybe this should go under What I Like…… hum! Also you have to go back to the preset list, click on a different preset, and and then go back in to the original preset and start over if you do not like some of your changes.

2. Wish Glow had a mask so the effect could be removed from parts of the image and remain on other parts. Right now you have to apply the effect, then add a layer mask in Photoshop and paint out the effect with a black brush in the mask, to localize the result. 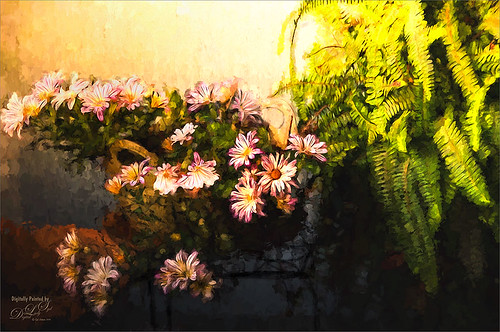 These are my miniature mums that bloomed on my porch a month ago – they are my very favorite mums! What worked in this image are the lines in the flowers and fern that Glow emphasized. To create this effect, first in Lightroom Seim’s (see sidebar at my Tidbits Blog for website link) PowerWorkflow Magic Portrait preset and Dave Delnea’s Backlight 002 vertical preset.  (If you want some spectacular lighting effects in Lightroom, you need to check out Dave’s inexpensive presets. These may be the best ones I have ever downloaded.) I like the effect of Glow and Impression used together, which is what this image did. The basic steps are as follows: On a duplicate layer, Topaz Detail 3 was applied using my preset (Medium Details 0.38, Large Details 0.16, and Contrast 0.30). Some clean up was done on a New Layer. Created a stamped layer (CTRL+ALT+SHIFT+E) and Topaz Glow was opened – Wonderland preset was applied and set to Multiply blend mode at 66% opacity while still in the plug-in. Now you start to see the magical effect this plug-in can creates. Next Topaz Impression was applied on another stamped layer using the Monet II preset as is. A layer mask was added and some of the Glow detail in the flowers was painted back. One again a Radial filter was used to dial in the center right flowers which is the focal point of the image. A Curves Adjustment Layer was used to add contrast back into the image. Remember that when you apply lots of filters from these plug-in, you almost always need to add a Curves Adjustment Layer or Levels Adjustment Layer to bring back the contrast that gets lost. 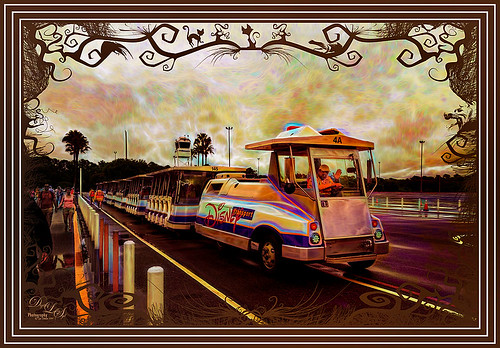 Another example of some of the effects you can get on an image. I created this preset and cannot figure out what preset I started using – even my settings are off a bit so I will try to reconstruct this and present another example. The nice webbing effect in the sky and the sleek colors in the front tram area are apparent. To me, this is the way it should look at Disney. The original of this is one is also shown below to give you a comparison. Also Smart Photo Editor using Burton’s frame and lowered effect so some color came through, and Violet Dream effect was used for the border.

Topaz has included their really great color sliders which gives a lot of flexibility to making the image colors look correct. I almost always adjust these sliders in both Glow and Impression. Also I seem to prefer the Multiply blend mode, but discovered that by reducing the Brightness slider some of the other Overlay, Soft Light and Hard Light blend modes will work nicely. I also discovered that the Electrify slider can give some really crazy results so sometimes it needs to be reduced. Still exploring how all these sliders work together – lots of fun here!

There are a couple of things that can be done to make using this program a lot easier. First, check out the manual that does a pretty decent job of explaining all the sliders and what they do. (Go to Help -> User’s Manual) And what I consider is the best resource is to go to Topaz’s webinars website and watch their wonderful videos. UPDATE: Topaz has now posted a really good video called Introduction to Topaz Glow. I find it extremely helpful to know what the software designers were thinking when the program was designed and how others use the plug-in. For example, I learned that in the Neon Collection, if you do not like the non-natural colors in the preset, reduce the Edge Color slider by moving it left to get a more natural look. Or that the Heavy Metal presets look good on cars! Still working on that one. I believe Topaz does have some of the best instructional videos.

If you love the special effects that so many of Topaz’s filters create, this is a definite “Yes” for you! It creates some very different results and works nicely with their other creative plug-ins. I have been having a lot of fun working on different types of images and will present more as the holidays get past. This is not just a neon filter, but lots of different effects that use the neon-type effect as a starting place. Topaz has once again created something totally different and for that I am grateful – no one else seems interested in doing this. It definitely adds something new in the “artistic” area to give more of a creative style to an image. Thank you Topaz!…..Digital Lady Syd

This entry was posted on 12/13/2014 by sydspix. It was filed under Photoshop Filter, Reviews and was tagged with Smart Photo Editor, Topaz Clarity, Topaz Detail, Topaz Glow, Topaz Impresson, Topaz ReStyle.