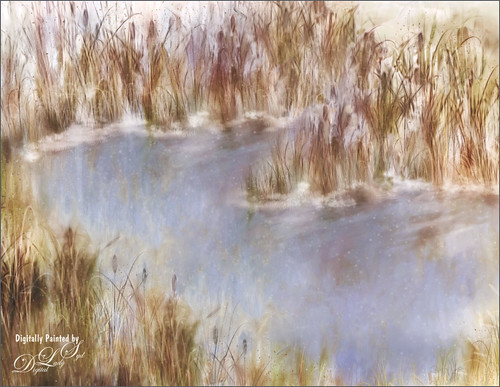 This week I am just doing a short blog on plug in that has been around awhile, and one I have not used recently. The plug-in is called Topaz (see website link in sidebar at my Tidbits Blog) Lens Effects and it creates a lot of special effects. I was able to get this rather unique look above by painting in Photoshop and using Lens Effects.

The above is just a little pond image created using my favorite Frostbo’s Grass Set2 for Photoshop brushes and Topaz Impression to get this painterly look.

These steps were taken before the plug-in was used. First a basic light blue painted background was created in Corel Painter to use for building up my image.  A similar result could have been done using a watercolor wash brush in Photoshop. Then in PS, several of Frostbo’s brushes were used to create the reeds and grass around the water – see blog link below that shows how to tweak his brushes for even some different results. Separate layers were used for each brush type and different colors were used and blended. TIP: If the brush strokes look too sharp, just use a small 4 pixel Smudge Brush set to a Strength of 15% and paint over edges. The plant layers were all grouped. Then the group was duplicated, merged, and flipped upside down to create a slight reflection in the water. On a stamped layer above (CTRL+ALT+SHIFT+E) Topaz Impression’s Ethereal Background by Blake Rudis preset was applied. A B&W Adjustment Layer was added to see where the focal point was going – and it needed to be adjusted. The adjustment was set to Luminosity blend mode at 83% layer opacity since it was used to adjust the focal point. Nik Viveza 2 added a little color to the water in the middle and some to the upper corners where the sky is. I still did not like the colors in the image so Impression was applied to another stamped layer using Swirly Strokes III. In Photoshop a black layer mask was added and just where I wanted more color added was painted back. Below is where the image was at this point, and I thought I really liked it. 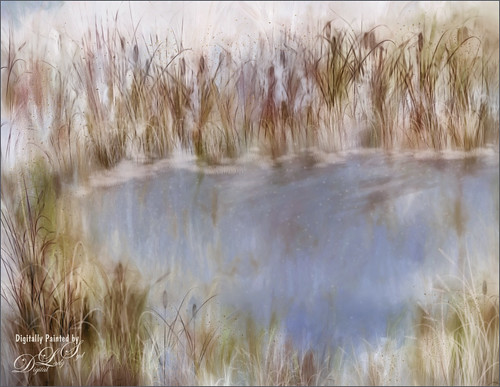 But then it seemed like a little directional color needed to be added. So that is when Topaz Lens Effects was opened two filters were applied.  The Reflector (set to Golden Type, Strength 0.20, Transition 0.23, Position 0.31, and Angle 306.5) to add just a little warmth in the lower right foreground. The next filter was the Split Prism (Two – Mixing level 0.44, Radius 0.27, Rotation 45.00, Type II, Effect Center (659,349)) which added another smaller version of the painted image into the photo. A layer mask had to be added and edges cleaned up. Also on a New Layer above, some Clone Stamp and Spot Healing Brush clean up was done. On a New Layer, Frostbo’s Snow Drops brush (just one brush but really great to add in a little snow look) was used to add in some scattered snow, and then the Blur Tool was used to soften them slightly – similar effect to using the Smudge Tool above. I could never think of a good use for Split Prism filter and this image is really a cool way to use it! You can see this made an immense change to the image and I think it definitely added interest into it. 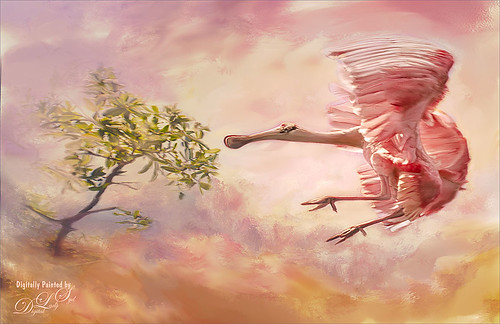 This image is of a Roseate Spoonbill taken at the St. Augustine Alligator Farm Rookery. Not sure how I got this crazy landing shot, but it sort of fits the crazy antics these birds do. The texture was one I created in Corel Painter to use with this beautiful bird. The bird image was first painted with Mixer Brushes in Photoshop. The texture layer was added at the bottom of the Layer Panel. Then a black mask was added to the top bird layer and just the bird and part of the tree were painted back so the background showed up. I wanted some colors in the background that blended nicely with the beautiful pink in the bird. Topaz Lens Effects Reflector filter was used to lighten the bird slightly (settings were Type Golden, Strength 0.47, Transition 0.40. Position 0.30, and Angle 271.3). Next another copy of the texture was placed on top and set to Multiply blend mode at 62% layer opacity. Created a stamped layer above (CTRL+ALT+SHIFT+E) and opened Lens Effects again and selecting the Fisheye Lens filter set to Distortion Amount 0.25. By placing the effect on the bird, it gives a very comical effect to the image. Back in PS the bird was selected and the Content Aware Move tool was used to move the bird over to the right a little more in the image. Another stamped layer was created and this time the same Fisheye filter effect was centered on the tree to stretch it out some like it was reaching out to the bird. Back in PS a black layer mask was added and just the tree was added back into the image, so now both the bird and tree had exaggerated characteristics. On another stamped layer a Lens Effect’s Single Tone Filter using the Old School Haze II was applied. After that a little PS Camera Raw Filter magic was performed using the Radial Filters to get the bird colors and tree colors just right. There were some adjustments layers and burn layer to finish up, but basically the Lens Effect filters created the colorful result of this image.

So we covered the Topaz Lens Effects’ Reflector Filter, Split Prism Filter, Fisheye Lens Filter, and Single Tone Filter. I actually added the UV Haze Filter on the image above – the paint strokes could be seen really nicely but decided against using it for the final version. There are really nice Lens Motion effect, Streak Filter, a Diffusion Filter, Polarization Filter, Graduated Color Filter, Fog Filter, Toy Camera effect, and Tilt & Shift Camera effect to name a few, all with presets or sliders to make your own presets. There are some serious Bokeh Effects that can be achieved with this plug-in also, but I have not covered this. Check out Topaz Labs website for more info on these.

Well I hope this will give you a little incentive to take another look at the Topaz Lens Effects if you own this plug-in, or download a trial to try out. There are lots of choices and it definitely adds some dimension for the creative post-processing of images. Many of the effects are not contained in other plug-ins, which is one of the reasons I really like the Topaz plug-ins. And it was a lot of fun, and for me that’s what it is all about!…..Digital Lady Syd

This entry was posted on 07/25/2015 by sydspix. It was filed under Photoshop Filter and was tagged with Nik Viveza 2, Topaz Impression, Topaz Lens Effects.