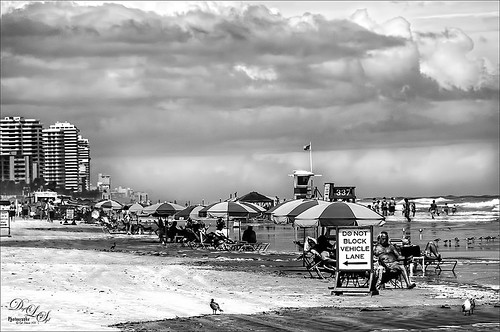 This week I was watching some of Creative Lives‘s Photo Week shows and came across this wonderful black and white technique presented by Vincent Versace, another one of my favorite Photographer and Photoshop gurus. The image above is one I recently took at Daytona Beach on a beautiful September Day. I was trying to get across the point that cars are allowed on this beach, one of the few in Florida, but none were present on this weekday. This rather simple process was originally developed by the Adobe Evangelist Russell Brown and was described in his book from 2004 called The Photoshop Show.

What I learned is that to have a really good black and white image, you must first start with a really good color image – or to put it another way, color matters! The shot may have been taken to use as a black and white image, but the image must first be cleaned up before converting to the black and white. Vincent said do not do your conversion in a RAW converter like Lightroom or Adobe Camera Raw as it comes in the workflow at the wrong place – need to do other things to image in Photoshop first. If you convert using  a single Channel or the Grayscale Mode (uses just the Green channel info) of the image, you lose tw0-thirds of the pixels in your conversion. Converting to LAB does not help either since you really only have the Luminosity Channel that can be used for the conversion. Therefore, the best way to convert your image into a black and white is to use a Hue/Saturation Adjustment Level with Saturation set to -100 where all three of the color channels (Red, Green, and Blue) will be available. By adding a second Hue/Saturation Adjustment set to Color blend mode underneath, the Hue slider can be used to change the contrast of the different colors, and the Saturation slider will allow for smaller contrast changes.

For step 1 above, Topaz (see website in sidebar at my Tidbits Blog) Detail 3 was used to sharpen the image and Topaz DeNoise 5 to remove some of the noise that was in the blue sky. Also two Curves Adjustment Layers were set to Luminosity blend mode to get the umbrellas, water and sky to look correct. The layer masks were filled with black (CTRL+I in mask) and just the areas I wanted to emphasize were gradually painted back with a soft white low opacity brush.  Each of my blog images needed some tweaking first. The settings used in the Hue/Saturation Adjustment Layers were ones Vincent used in his presentation. The nice thing is that if you do not like the results, you can always change them since the adjustment layers are non-destructive. 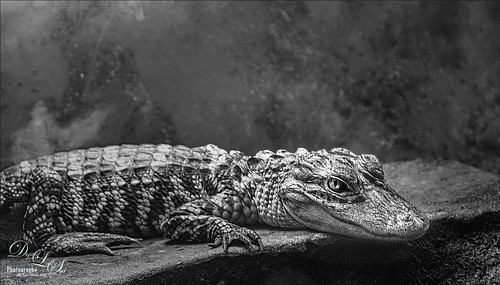 This little alligator has a pretty nice place to live as the main attraction in a tourist shop in Daytona Beach. He was sitting under a nice toasty light which made the shot pretty easy. This is another example of using the exact same workflow but his eye was sharpened with an Exposure Adjustment Layer before the conversion to black and white. A little clone stamp clean up on a New Layer above was used to get rid of some of the distracting bright spots near his body. That was it. 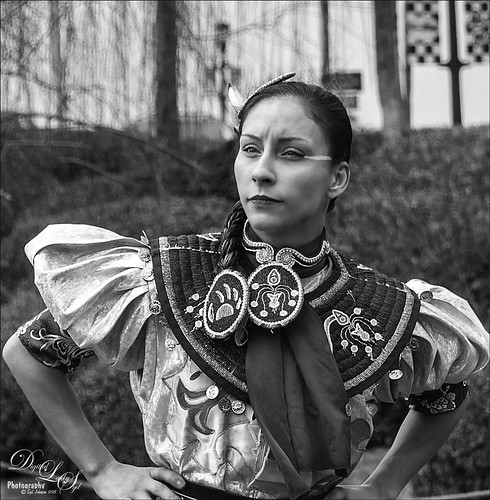 This beautiful young lady was performing a healing dance in a special dress called a Jingle Dress. This is a rather rigorous dance with very colorful costumes and was taken at the 25th Annual Native American Festival in Ormond Beach, Florida. These events are always a wonderful place to take photographs. The same workflow again, except this time a Frequency Separation process was used on her face (it was applied rather lightly since this was not supposed to be a glamour shot), and the Sharpen Tool was used on some of the jewelry and blouse details. (Check out Retouching Skin Utilizing Frequency Separation for more info on this.) An Exposure Adjustment Layer was used to sharpen the eyes. Then the black and white conversion was done.

I would highly recommend that you purchase Vincent Versace’s excellent video at Creative Live or buy his book if you find this technique intriguing. The video at Creative Live is for sale and is called Black and White Photography: Learning Grayscale Conversion. His recent book covers much more about this technique and is called From Oz to Kansas: Almost Every Black and White Conversion Technique Known to Man. Well I hope you get to try this wonderful technique, especially if you like black and white images. It really is quite easy and good results can be achieved. I love it when I find a new way of doing something that I have not tried out before. This one turned out to be great! Have a good week!……Digital Lady Syd

Digital Lady Syd Related Blogs:
How to Use Curves Adjustment Layers to Dodge and Burn an Image
How To Do a Quick Eye Sharpening in Photoshop

This entry was posted on 09/26/2015 by sydspix. It was filed under Photoshop and was tagged with Hue/Saturation Adjustment Layer, Topaz DeNoise 5, Topaz Detail 3.