HOW TO USE THE DEHAZE SLIDER IN LIGHTROOM AND CAMERA RAW 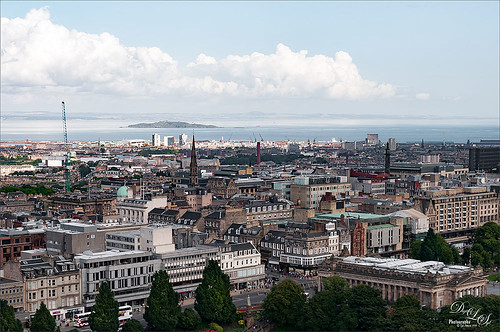 Originally I thought there was not too much to discuss about the new Dehaze slider feature when it was released for Lightroom CC and Photoshop CC2015 in Camera Raw version 9.1. Now that it has been around a while, there are a few things that should be addressed. The image above of a view taken from Edinburgh Castle in Scotland is a perfect example of how this slider can really make an image pop without much manipulation. Below is the image as it came into Lightroom as a Camera Raw file. 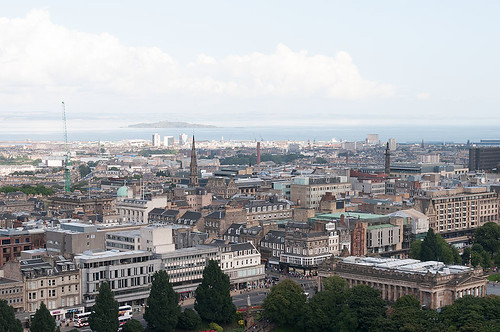 As you can see the clouds were really blown out in the original along with a real flat look, which RAW files tend to be. There were just a couple things done: the Dehaze slider (found in Lightroom CC’s Effects Panel or Photoshop CC 2015’s Camera Raw’s fx Panel) was set to +76; the Sharpen Tool Amount was increased to sharpen the whole image a little; the Noise Reduction Luminance slider was set to 16; and an Adjustment Brush was used on the left foreground trees as they were too dark compared to the ones on the right (the Shadows were opened up, the Contrast reduced, and 1/2 stop of Exposure was added to blend these trees into the others}. Nothing was done in Photoshop to this image. I really like what just a simple Dehaze adjustment  can do to make this a beautiful image and what I remember.

Julieanne Kost, the Adobe Evangelist, says in her blog that Dehaze is “based on a physical model of how light is transmitted and it tries to estimate light that is lost due to absorption and scattering through the atmosphere.” She says to adjust your White Balance first, before using the Dehaze slider. If you are afraid that you may be clipping the blacks, press ALT+drag the Dehaze slider and watch the image to see when the black pops in. Then adjust the Basic Panel sliders like the Shadow and Vibrance sliders. If using this slider from Photoshop CC2015’s Camera Raw filter, it can be applied as a Smart Object (Smart Filter-same thing).

Ben Wilmore, the Photoshop guru, said to adjust the White Balance after using the Dehaze slider first. Also Blake Rudis, another Photoshop expert, suggests using it as a first step if there is any haze in your image, so that is my workflow. The Dehaze slider can introduce a color cast, especially with hazy skies. This needs to be fixed after setting the slider.

It has been suggested that this slider works well with cityscapes, as above. Also it works well with underwater images, as in the Manatees image. The turtle shot below uses it as more of a creative slider to add some haze to the background of the image. It would be nice if you could add this effect using an Adjustments Brush or Graduated filter.

As mentioned before, it can add color casts, especially blue, in the shadows because the ground bounces the cool outdoor sky light up onto your objects. Sometimes it exaggerates artifacts as in small white highlights and dust specs. Ben Wilmore suggested three ways to correct for these issues.

These are all pretty easy fixes, and it depends on the image as to what works best – sometimes all three will need to be used. 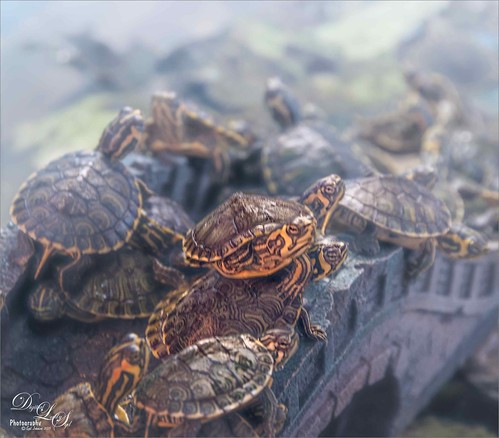 This shot was for Bob, my son’s long past turtle, and the humble beginnings these creatures have. These turtles were being sold in a store at the beach and I actually felt sorry for them – they were so crowded in this little bowl. The original RAW file is shown below. I decided to try adding haze to this photo to draw focus to the front turtles since there was way too much color and too many turtles in the image.  This time the Dehaze slider was set to -67 before the Basic sliders and the Adjustment Brush were used. 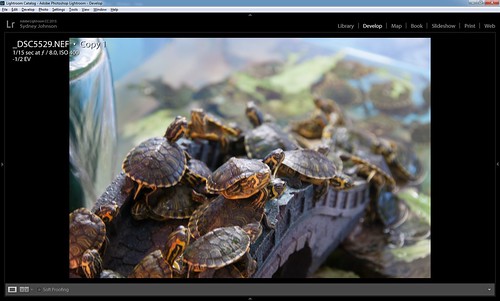 Once the haze was added, the Adjustment Brush was used to remove the haze off the few turtles in the front, and yet leave the effect alone for the distance. It worked very nicely. See the brush settings used and the red overlay brush strokes in screenshot below. By varying the brush Flow amount, the effect can be removed more lightly from parts of the image. The Temp and Tint sliders were adjusted along with an increase in Saturation to help recover the brightness in the foreground turtles. 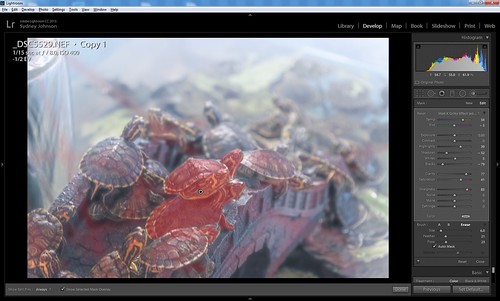 I did get a little of the white blown-out artifacting on the foreground turtle’s back. In Photoshop, Topaz (see sidebar at my Tidbits Blog for website link) Detail 3 and Nik Viveza 2 were used to add some detail and brownish tones back into his shell since I think the patterning in the shells is the interesting part of this image. 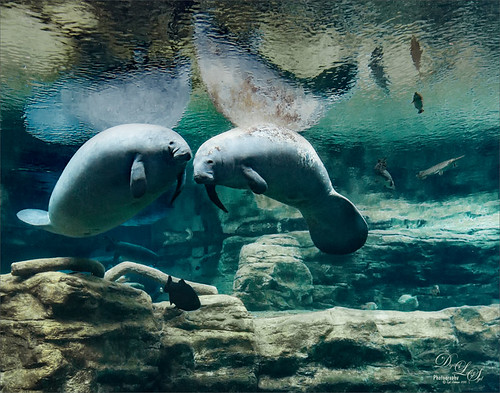 The Manatees above seemed to totally enjoy watching everybody take pictures of them while visiting their exhibit. The RAW image is shown below so you can see the color cast, noise and bright highlights. 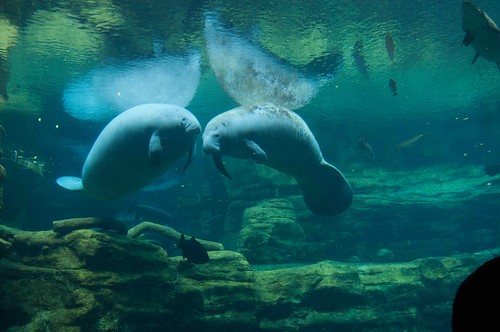 The Dehaze slider was set to +78, the White Balance was changed with the Temp slider set towards yellow and Tint towards the magenta. Then a little Exposure, Highlights, Shadows, Clarity, and Vibrance changes. Next some HSL changes using the Luminance and Saturation sliders to tone down the greens some more. The Split Toning Highlights and Shadows were also added to give the highlights and shadows some corrected color. In Photoshop the Spot Healing Brush was used extensively to remove the little spots everywhere that were in the water – very time consuming. A Noise Reduction filter was used with the layer opacity set back to 75% so as not to remove all of the grain interest. Since the reflections were so bright at the top of the image and drew the eye up, a black to transparent gradient was applied to a New Layer. A layer mask was added and the manatees were painted back in so the focus is on them. I found it not as easy to use the Dehaze slider with the underwater image, but it definitely sharpened up the details so you can see the manatees more clearly.

This slider apparently is not without its controversy. This feature is in the latest update of Lightroom CC, but it was not included in the Lightroom 6.0 original release. Apparently the programs are identically, except the Dehaze feature is not turned on in Lightroom 6.0. Prolost’s website has some free presets that will allow you to use the Dehaze slider effects – I do not have this issue so I do not know how accurate the results will be, but worth a try. Also, there is no guarantee that if Lightroom 6.0 is updated, these presets can still be used.

If you would like to download the new Lightroom CC/6.0 Manual, here is the link to Adobe’s pdf file as it is a little hard to find. Also I just learned that “Adobe provides backwards compatibility for the latest cameras for free in Photoshop CS, CS2, CS3, CS4, CS5, and CS6 as well as Lightroom 1, 2, 3, 4, and 5, through the Adobe DNG Converter. With this tool, you can easily convert camera-specific raw files from supported cameras to a more universal DNG raw file.” Therefore, if you bought a new camera, you will be able to open the files up in the older versions of both Lightroom and Photoshop’s ACR – no feature updates, but at least your programs are not unusable.

Well hope you enjoyed this blog – a pretty simple slider that seems to give some big results to the images you are processing. A lot of people are really liking the effects. Until next time, have a good one!…..Digital Lady Syd