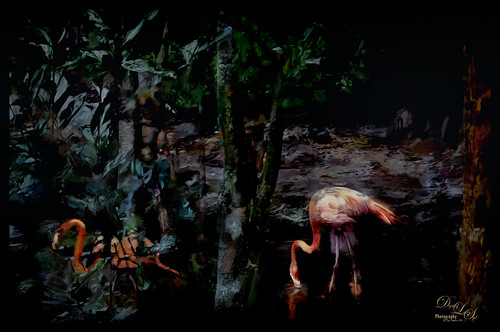 Totally psyched that Topaz (for website link see my Tidbits Blog sidebar) Impression updated their plug-in to Version 2. Know you will see lots about this on the internet, but I am enjoying using it so much I wanted to share some of my initial responses to the program. I am surprised how much more they added to what I considered already a fabulous program! The image above used the a Watercolor II preset with some changes created in version 1 and still works great in the newer version. I call it SJ WC Like Effect-modified preset and can be downloaded in the Community Library. (For more info on post-processing on all images, check out the end of blog – this will give you a feel how many different filters and plug-ins can work together to get these effects.) If you own Topaz Impression version 1, this update is free!!! Best deal around – all of Topaz Labs’s plug-in updates are always free once you own it!

It appears that only one Mask can be used for each Impression layer. I particularly like this Brush tab to remove the painterly effect and enhance the detail in your focal point. The large Mask window is very useful to see what is being affected in your image. Wonderful effects can be achieved in this section! 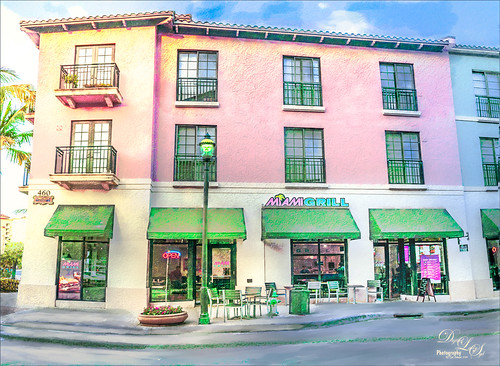 This image of a restaurant located in the Cityplace shopping area of West Palm Beach used the Modern Urban Street Art III preset to get this very modern sketchy feel. (Changed the texture to Grass Patchy set to Texture Strength 0.89, Texture Size 1.00, and Texture Color of Red 255/Green 238/Blue 174).) In this case once the preset was applied, the layer was duplicated. The first layer was set to Color Dodge at 100% opacity and the second layer was set to Divide at 77% layer opacity. Layer masks were added and a few areas that did not look correct were lightly painted out with a soft black brush. This combination worked nicely on this image to give a real Florida look to the image. See Image 2 below for more post-processing info. 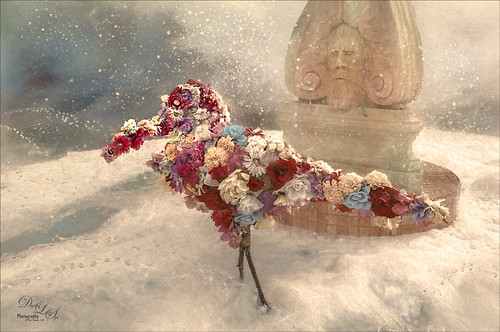 Another example of using this updated plug-in. This was a bird topiary of flowers at Cityplace in West Palm Beach – this was actually a fountain where suds had been introduced to the water. For some reason it felt right to add a slight painterly effect to give a wintry cool feeling. This image used one of Impression’s new presets, one which I really like, called Chalk Smudge. In the Masking section, painted out parts of bird so they showed up sharper – then tried to add back a little bit of effect by using the Erase tool (white droplet) to remove areas looking too sharp (set to lower Strength). Opacity slider for all settings was set to 0.74 and to Normal blend mode. See Image 3 for more info.

As you can see, this update contains a lot of new things – some I have not fully explored. All-in-all, very nice update! For my version 1 review, check out my Digital Lady Syd Speaks Out on Topaz Impression blog. Once again the Topaz Labs group has done a wonderful job on their plug-in! I am sure I will be playing with this plug-in for days to come as the original was one of my favorite – now it is even better! Have a great week!…..Digital Lady Syd

Image 1:  Duplicated the layer and entered the Topaz Impression 2 plug-in. Went to the Community tab and downloaded my SJ WC Like Effect-modified preset to apply this result. In a layer mask back in Photoshop, lightly painted back just the two foreground flamingos to bring back a little bit of detail to the birds. Next used a blender brush on a New Layer to  clean up a little bit of the messiness caused by the painterly preset from Impression 2. Used another New Layer to add a little line delineation on the trees. Created a stamped layer on top (CTRL+ALT+SHIFT+E) and took the layer into Topaz Black & White Effects. (Used my SJ Old Fountain preset.  Settings included: Conversion Basic Exposure: Contrast 0.02, Brightness 0, Boost Blacks 0.06, Boost Whites 0.00; Adaptive Exposure: 0.30, Regions 8, Protect Highlights -0.05, Protect Shadows 0.00, Detail 2.00, Detail Boost 1.00, and check Process Details Independently; Finishing Touches: Silver and Paper Tone: Tonal Strength 0.20, Balance 0, Silver Hue 32.00, Silver Tone Strength 0.50, Paper Hue 32.00, and Paper Tone Strength 0.15; Quad Tone: Color 1 Region 0.00 set to R0/G0/B0, Color 2 Region 142.5 set to R75/G78/B96, Color 3 Region 228.0 set to R222/G220/B172; and Color Region 4 255.0 set to R255/G255/B255; Border – Type Solid Black Size 0.46; Edge Exposure Left and Right Edge Size 0.20, Edge Exposure 0.17, and Edge Transition 0.20; and Top and Bottom Edge Size 0.20, Edge Exposure 0.40, and Edge Transition 0.20; Vignette: Strength -0.47, Size 0.85, Transition 0.61, and Curvature 0.54; and Transparency to 1.00; and in Local Adjustment used the Burn tool to darken the background, Color on the Bird, and Dodge on the trees to enhance where the lines of the trees were.) On a new stamped layer opened Topaz Texture Effects (Used SJ Crisp Morning Run Modified preset – Texture: changed to bright turquoise texture (halfway down on right column) with Opacity set to 0.29; Vignette – Strength 0.60 and Size 0.53 with Color centered on between bird and trees; in Mask painted back the bird and a little bit of light in trees and background behind bird – used Strength of 39 and Hardness of 20 using black.) In a layer mask and the Gradient Tool selected, a black to white gradient was created from top to bottom to darken the upper edges a little. Image 1 is the final result.

Image 2:  This image was difficult to clean up – first the Adaptive Wide Angle filter was used in PS to straighten the walls somewhat. Then the open areas that resulted were cleaned up with the the clone brush. Next the Topaz Impression 2’s Modern Urban Street Art III preset was applied and the plug-in was exited. The layer was duplicated and said before, the first layer was set to Color Dodge blend mode at 100% layer opacity and the second layer was set to Divide blend mode at 77% layer mode. A little clean up was done on another layer and finally on a stamped layer, Nik Viveza 2 (now free) was used to bring in the focal area a little – located where the foreground grouping of chairs on the sidewalk. On another stamped layer a Camera Raw filter Radial filter was used to lighten the left side of the image and darkening the right side a little. A little painting was done on a New Layer and the last step was to use a Curves Adjustment Layer to average out the tone.

Image 3: So what was done in this image to get a really surreal effect? First Topaz Detail 3 was used to sharpen up the flowers only (used black mask and painted back only flowers). One of my Corel Painter textures called SJ Beach Scene was used to add a brownish foreground and a light bluish sky. Another one of my textures called SJ Forest and Plains was placed on top to add the wave or outer space feel in the upper left corner especially – it was set to Luminosity blend mode at 79% layer opacity. The background was copied and placed on top – the top part of image was selected and placed in a layer mask so the people and cars in the area were removed. Then several layers were about used to clone out and clean up image areas. On another New Layer, a basic small snow brush was used to add the wintry feel to the sky. A stamped layer was created and Topaz Lens Effects was opened where the Graduated Neutral Filter was selected and set to the Graduated bottom half 2 stops preset. On another stamped layer, Nik Color Efex Pro 4 was used to – Flypapers Fly Book & Skull Preset was applied (this contained the Glamour Glow, Reflector Efex, Film Efex: Vintage, and Cross Processing filters). Another stamped layer was created and finally Topaz Impression 2 was opened where the Chalk Smudge Preset was used. In the Masking section, painted out parts of bird so they showed up sharper – then tried to add back a little bit of effect by using the Erase tool to remove areas looking too sharp (set Eraser brush to lower Strength). Opacity slider was set to 0.74 to Normal blend mode. The birds floral eye was worked on next. The Liquify Tool was used to increase the size of the eye and an Exposure Adjustment Layer was used to make it stand out a little. (See my How To Do a Quick Eye Sharpening in Photoshop blog.) A Red Channel Curves Adjustment Layer was added to blend image a little better. (See my How To Use a Red Channel To Create a Nice Blended Image Effect blog.) On a stamped layer Lucis Pro was used to further blend the sky in a little nicer. (Settings used are Enhance Red Channel 175/Green Channel 195/Blue Channel 149 and Assign Original  Image Color set to (0% Processed /100% Original.) (See my Digital Lady Syd Reviews Lucis Pro 6.0.9 (Now Affordable!) blog.) On a New Layer Grut’s FX Cloud Gumbo 01a brush was used to fill in the water to look like built up snow. (These brushes are terrific and very handy for image clean up!) A Solid Color Fill Adjustment Layer was added on top and set to a light beige – it was set to Color Blend Mode at 57%. It made the statue look a little better and the red flowers less saturated – painted out the sky so it was not affected. Last step was a Curves Adjustment Layer to reduce the overall tone just a little. This was a huge workflow, but you can see how the Impression plug-in works very nicely with many of the filters from both Topaz and other vendors.