HOW TO USE MOTION BLUR FOR ARTISTIC EFFECT 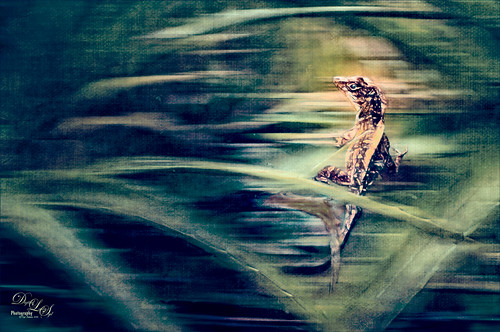 This image was taken at the Harry P. Leu Gardens in Orlando, Florida. This little guy thought he had a pretty good hiding place, but I found him! I wanted to give him a very surreal surrounding and I think it happened using this week’s technique! Learned this from one of my favorite resource places, Creative Live, where a lovely lady named Kathleen Clemons presented a wonderful program called Creating Painterly Photographs. She was teaching how to both shoot and use Photoshop to give some very creative effects using mostly flower and leaf images. This got me thinking about how I could use some my favorite techniques and PS plug-ins to do get some interesting results also.

One of her PS suggestions was to try using the Motion Blur filter to get a different effect. That is exactly what was done in the image above. Very simple process to actually apply the filter. Below is the original image so you can see how the motion blur turns a rather busy image into a really nice painterly result.

This is such a simple technique I am not sure why I had not thought of it myself! Now any of your other filters and textures can be applied with a very different look being created by the motion blur. Thank you Kathleen for bringing this to my attention! (Click on the original image below to see a larger view in Flickr of the Layer Panel – it can be clicked on to enlarge also.) At end of blog under Image 1 is a detailed paragraph on all the different layer steps shown here. 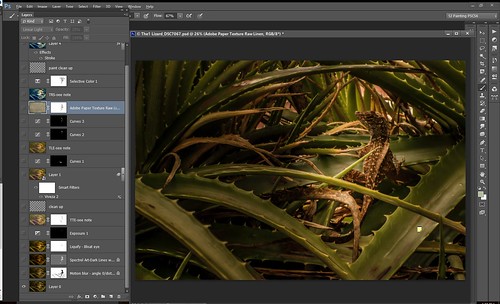 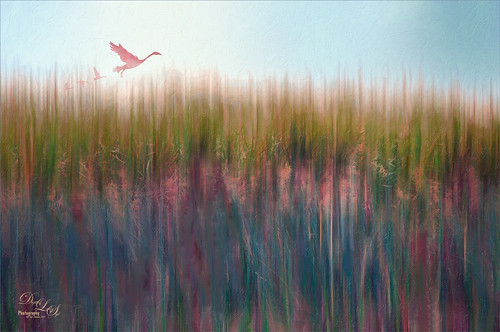 This image was taken at the Viera Wetlands also called  Ritch Grissom Memorial Wetlands in Brevard County, Florida. A very similar image is posted here from a Tidbits Blog for the original version. Used the workflow above but this time Topaz Lens Effects’s Lens Motion filter was used to create the Vertical motion blur although PS could have just as easily been used. See Image 2 below for more details on how this image was finished. 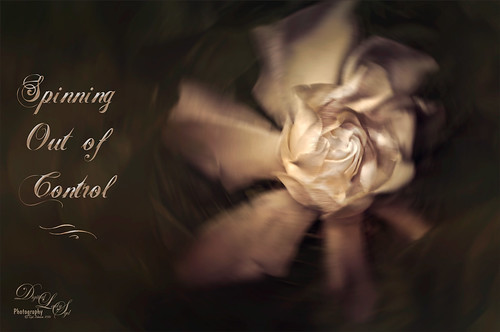 This beautiful gardenia was also taken at the Harry P. Leu Gardens in Orlando, Florida. Topaz Lens Effects Motion Blur filter’s Zoom was used to get this lovely effect. See Image 3 for more details. Kathleen definitely had some great tips for both photography, including how to use a Lens Baby, and Photoshop – if you like shooting flowers, she is a master at it! Hope everyone has a great weekend – I think I will go try shooting some more flower shots using Kathleen’s techniques this week!…..Digital Lady Syd

Image 1 Info: First the PS Motion Blur settings used were Angle 0 degrees and Distance 375. On a stamped layer (CTRL+ALT+SHIFT+E) was used created. Then to bring out the Lizard more, the free JixiPix Spectrel Art’s Dark Lines preset with the Detail set to 74 was applied – then in PS the layer was set to Linear Dodge blend mode. Just the lizard was painted back in a black layer mask (just press ALT while clicking on the layer mask icon at bottom of the Layer Panel). Since the lizard was too bright, the Density slider in Properties Panel for the layer mask was set to 66%. This plug-in is a great way to add some detail back into an object that is not defined well. (See my How To Use the Free Spectrel Art Plug-in blog.) Next on another stamped layer, the Liquify Filter’s Bloat Tool was used to increase the Lizard’s eye just slightly. Now an Exposure Adjustment Layer could be used to pop his eye so it could be seen even better. (See my How to Do a Quick Eye Sharpening in Photoshop.) Another stamped layer was created and Topaz Texture Effects was opened. Kathleen in her videos showed how to add a folder with your favorite textures in the Textures section of this plug-in. Just click the New box in the upper right corner of the panel in the opening screen. It turns into a Custom (preset) and the big (+ sign is clicked on. Only the Texture Panel was opened – by clicking on the little square next to the texture drop-down field, a new texture folder can be added. This is where loaded in a batch of many of the textures I created (but I could have added up my favorite 2 Lil’ Owls or French Kiss textures – see my Tidbits Blog for website links). Then all the sliders below can be applied to these textures very easily and areas can be masked out with a brush. Other panels can be added at the bottom or another Texture section can be added. This time I applied on of my first textures made in Corel Painter using Skip Allen’s Buttery Oils brushes. Then changes were made to the Opacity, Blend Mode, Saturation, Color and Color Strength in the plug-in. Lots of fun here! On a New Layer some clean up was done where edges looked bad. On another stamped layer, the now free Nik Viveza 2 was opened and 3 control points were added just to the Lizard to give his face and body yet more detail. Used a Curves Adjustment Layer to get rid of an overly bright section on a leaf in center of image. (See my How To Use Curves Adjustment Layer to Dodge and Burn an Image blog.) On yet another stamped layer, Topaz Lens Effect’s Add Vignette Selective – Soft Olive Green preset was applied with these changes: Placement Adjustments – Focus Width 0.55 and Focus Height 0.45 – placed center on lizard (2989, 1404); Tonal Adjustments- Vignette Strength 0.20, Transition 0.40, Contrast 1.51, Brightness 53.02, and Opacity 25.25.  I really like the olive color in lots of  my images for a Vignette. Then two more Curves Adjustment Layers were created – following the Dodge and Burn technique above – to give the lizard’s head yet a little more pop and to soften down some of the vertical lines. Next Adobe Paper Texture Panel (this is free from Adobe) was opened, a Flypaper’s Raw Linen texture was applied using Linear Light blend mode at 25% layer opacity. This panel is a really cool way to see quickly what a texture will look like on your image. As you can see, I did not settle on a final color for this image until Topaz ReStyle was opened and saw the beautiful way some depth could be added to the image. Created yet another stamped layer and applied the Brandeis Blue preset with these changes: Color Style Hue Primary -0.70, Secondary -0.12, and Fourth -0.62; Lum Secondary -0.19 and Fourth 0.03; Basic Color Temperature 0.20 and Tint -0.34; and Detail Structure 0.34. A Selective Color Adjustment was opened to adjust color just a little more (Reds: Cyan +46%, Yellow -55%, and Black -28; and Yellows: Magenta -26 and Yellow -49). A clean up layer was added to soften some overly bright areas with a low opacity brush. Many of the layers had layer masks applied as you can see in the screenshot. It took a long time to do, but I like the final result now. This Lizard looks like he is really looking around!

Image 2:  Lens Effects allows placing the effect in the image with different types of blur (Panning,Rotation, Shake, Spiral and two Zooms). This image used a Rotation (same as the vertical or horizontal effect in PS) – the Motion Amount is the same thing as the Distance in PS Motion Filter. Alien Skins Snap Art‘s Impasto Detailed was used for the texture and the Dodge and Burn Curves Adjustments Layers were used to emphasize certain areas. Lisa Glanz Flying Geese bird png was used with a Pattern Adjustment Layer clipped (ALT+click between the layers) using a sepia watercolor pattern to give the birds some light texture. Topaz ReStyle was used again (Hanging Orangutan – Set to Restyle Color blend mode, Hue Primary 0.02, Third 0.50 and Fifth 0.02; and Sat -0.42; Basic Saturation -0.16; Tone Black Level -0.05, Midtones 0.20 and White Level 0.05 ). The sky was white so I added the blue sky in Nik Viveza 2 using the Color Swatch – this turned out so natural looking. This is a good tip for Viveza which is very good with handling color problems.

Image 3: Wanted to point out that for this image, all the clean up was done first including using Topaz Detail 3 to sharpen the center of the flower and adding one of my textures to soften the background and painting back the flower (set to Overlay blend mode at 53% layer opacity). Two Curves Adjustment Layers were used to Dodge and Burn the background. Nik Viveza 2 was used to darken the corners of the image and add focus to the center. Then Topaz Lens Effects Zoom motion filter was applied. Last the text was added (it is a really old font from 1996 called Abigail and no recent link could be found – there is now a newer different font called Abigail that is not this one). On a New Layer above a simple flourish was added under the text. A Layer Style was created to give the nice effect on the text – learned this was an old Photoshop TV video from 2007 (Bevel & Emboss – Style Inner Bevel, Technique Smooth, Depth 276, Up, size 54, Soften 10, Shading Angle 120 degrees and Altitude 39 degrees (no Global Light on), Highlight Mode Screen at 93% opacity and Shadow Mode Screen at 28% opacity; Inner Glow Blend Mode Lighter Color, Opacity 74%, Noise 0%, Color set to Gradient going from a blue color (#0e2053) to white, Elements Technique Softer, Source Edge, Choke 0%, Size 70 px, Quality Range 50%; and Color Overlay set to Blend Mode Normal, Color Swatch a beige (#93815e) at 100% opacity). Change the overlay color to get different colors in your text.