HOW TO GET A FANTASY FEEL IN PHOTOSHOP 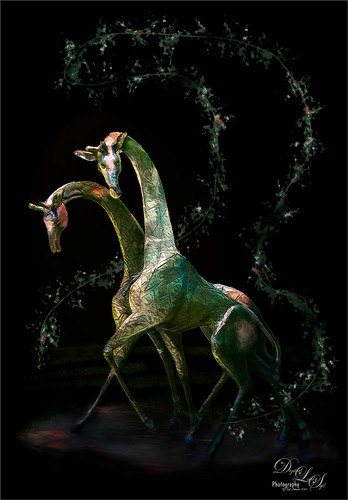 Decided to do something different with this bronze giraffe sculpture this week. It is part of the Philip Hulitar Sculpture Garden in West Palm Beach and was created by Henry Mitchell in 1959 – and was one of my favorites at the Garden. This workflow actually began with finding an image in an old 2003 Digital Photo magazine that used Find Edge and Gaussian Blur filters, which were blended into a black background to get a nice sketchy look.

Since I have Topaz (see my Tidbits Blog for website link) Simplify, it was used instead of the Find Edge filter. My final image does not look like the original image from 2003, but since Photoshop now has so many more nice features, I believe it is a better result.

Next a Black Solid Color Fill Adjustment Layer was added above the background layer. This way, the color can be changed quickly if a different background is wanted. It was left to black in this case.

On a stamped layer (CTRL+ALT+SHIFT+E) the giraffes were roughly selected using the Quick Selection Tool and the new Select and Mask panel (old Refine Edge panel) was opened. I just figured out that for me, once in this panel, sometimes instead of using the Onion Skin View, I prefer the On White View set to about 70% opacity – then the Brush which is the third icon down on left was used to paint in or out areas that needed to be cleaned up. This way a very good selection can be obtained – the Refine Edge brush was not even needed. The panel was closed selecting the Output To: New Layer with Layer Mask in dropdown. The Select and Mask panel did a very good job, but more clean up work was needed on the layer mask. The key is to get a really good layer mask, and it may take some effort to finish cleaning up the mask, to get a good result.

Since the faces were getting lost in the texture of the image, the original background layer was copied and placed on top with a black layer mask (CTRL+I in layer mask to make black). With a really low opacity brush of 12%, the faces were very softly painted back to show the eye and ear details. On another stamped layer the Lighting Effects filter in Photoshop was used to light up the giraffes  – emphasis was placed on the faces and necks, and not so much on the legs. Note that a a soft yellow color (R249/G245/B98) was used and the original texture of the image was added back using the Red Channel set at a Height of 9. By trying different channels and heights, very different results can be achieved. See screenshot below of the settings for this layer. 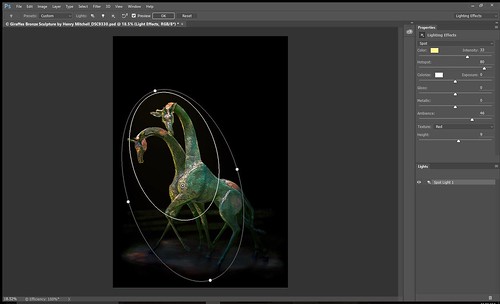 Since the image still lacked a little pizzazz, on a New Layer a little vine regular brush was selected, but I was very tempted to use a Glitter brush. Just wanted a brush to give a bit of fantasy look to the image. To add color into the brushstrokes, a Pattern Overlay layer style (double click on a layer to open Layer Style Panel) using a pattern with orange and bluish tones was added to it. The layer was set to a lower layer opacity.

The image now has that fantasy look which I really like.
****** 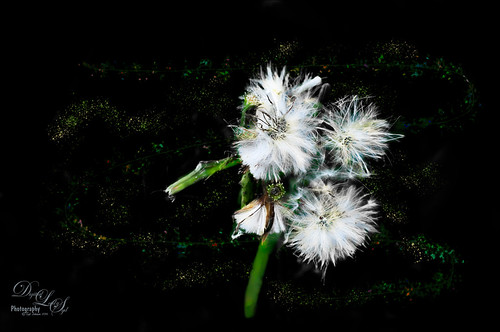 These dainty dandelions were taken at F/2.8 with my Nikon 60 mm Macro Lens with a Bower 0.5 x High Resolution Digital Lens with Macro added to the lens. I love the results I get with this set up. I wanted to try another fantasy image using similar workflow as above on the giraffes. This time, instead of using the Quick Selection Tool and the Selection and Mask panel, the now free Nik Silver Efex Pro 2 was used to select these blooms. Below is a Screenshot of how this was achieved. It leaves in tack all the little odd ball edges that would be impossible to get, even with the new and improved PS panel. Using the Control Points really helps select the weed. When back in PS, the stems and centers of the weeds were lightly painted back a white layer mask to add back a little color in these areas. 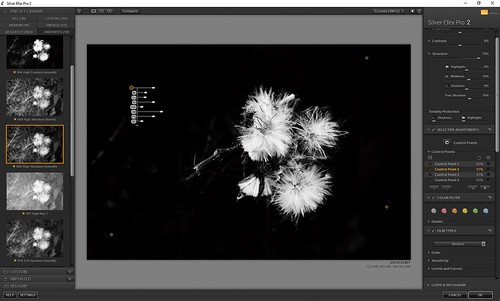 Then some clean up was done on a New Layer to further paint black on any areas that are not totally darkened out. On a stamped layer, Lucis Pro 6.0.9 was used to further define the edges (Enhance slider set to 143 and the Assign Original Image Color was set to 0/100%. (See my Digital Lady Syd Reviews Lucis Pro 6.0.9 (Now Affordable!) blog.)

Next the Vine brush was used again with a different Pattern added in the Layer Styles Pattern section. Here is something to note: When Layer Styles are added to a layer, it is best to duplicate the layer and rasterize it to maintain the color in the layer style. That is what I had to do here, duplicate the layer, rasterize it (right click on layer and select rasterize – it will flatten just that one layer), then turn the eyeball off on the original layer in case it is needed to go back into to adjust. On another New Layer Kyle T Webster’s Inkbox Spatter Punk brush was used to give the glitter effect and set to layer opacity of 72%.

A couple Lighten and Darken Curves Adjustment Layers were used to dodge and burn the image in the flowers. (See my How To use Curves Adjustment Layers to Dodge and Burn an Image Blog.) Also a New Layer was created, set to overlay, and with a light yellow color on a soft small round brush, the centers of the flowers were painted in to add a little emphasis to the focal points. (See my How To Add a Spot of Light blog.) The last step was to create another stamped layer and apply Topaz Detail to the image – this time to soften some of the puffy flower areas that had become a bit too crunchy looking. Used the Soft and Dreamy III preset and painted out the colored background so it was not affected by the preset inside the plug-in. Then applied it and added a white layer mask. This time painted out areas of the flowers that I wanted to remain detailed.

This was fun to try out the Lighting Effects Filter in PS which I do not use nearly enough. I am also getting more comfortable with the Select and Mask panel in the latest version of PS CC. The one that surprised me most was how the flowers in the second image could be selected pretty closely with the Silver Efex Pro – very easy to do! This is it for this week – hope you have had a chance to try out some of these Photoshop effects – they are really good!…..Digital Lady Syd

This entry was posted on 07/30/2016 by sydspix. It was filed under Photoshop Filter and was tagged with Lighting Effects Filter, NIK Silver EFex Pro 2, Topaz Simplify 4.