HOW TO DO A DOUBLE-EXPOSURE FOR FUN EFFECTS 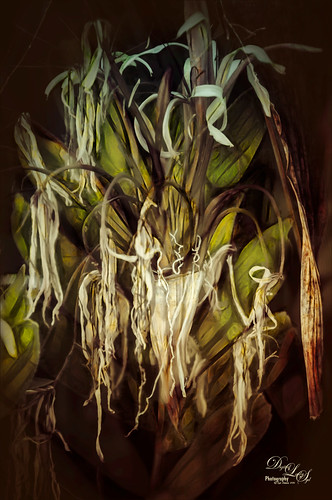 This week I decided to try a little in-camera photo effect and then post-process in Photoshop. In my mind, this is the best of both worlds when trying to put an artistic feel into an image. The above was first shot with my Nikon D-300 camera (I dearly love this camera and can’t seem to part with it!) and shot the image in multiple-exposure mode using just 2 shots. I am not really sure how this type of exposure is supposed to look, but this method seems to fit floral or plant images quite well. This image was taken in my front yard of a Queen Emma Lily in front of a Cardboard Palm. I see this as a very creative blend of the two exposures but it did take some finishing work in Photoshop to get the final interesting feel.

So first the basic workflow for taking a multiple- or double-exposure shot will be covered. It is not that difficult but do consult your camera manual to get the exact menu settings to do this. I will be using the Nikon D-300 menus, which due to its older age, should be similar to what is available on most newer cameras.

1 First set your camera to Manual Focus. To do this on my camera, looking at the front of the camera the Focus Mode Selector dial is located to the lower right of the lens. The dial should be set to M for manual (as opposed to C for continuous auto focus or S for single auto focus).  Note: For my camera, if either the Camera body or the Lens is set to Manual focus, then it must be focused  manually. Many of the lenses will have a Manual focus setting also (usually the lens is set to M/A – switch to M to make it focus manually). I am using the Camera Body setting for this.

2. On the back of the camera, press the Menu button and select the Shooting Menu. Then Scroll down to the Multiple Exposure choice.

3. In my camera I need to turn on the Multiple Exposure setting each time an image is to be taken.

It sounds a lot harder than it is. Just have to get familiar with where the settings are. Now you can try different camera settings to get different results. For the above, both of the in-camera exposures were shot using the basic Nikon 18-200 mm zoom lens set to 105 mm at F/5.6. Below is what the original out of camera image looks like. First the palm exposure was taken, then moved the camera and took the lily. 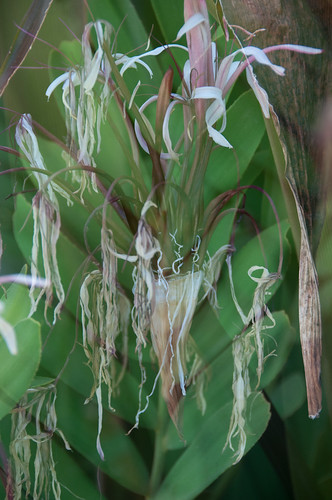 Post-processing: In Lightroom a Trey Radcliff free preset called Sunday Alone Time was applied and then the Vibrance was lowered (-65) so it was not so colorful. In Photoshop the layer was duplicated and Topaz (see sidebar at my Tidbits Blog for website link) Glow was opened and my SJ Inter Web Variation was applied. (Settings are: Primary Glow Type Dark, Glow Strength 1.00, Effect Sharpness 0.12, Electrify 1.00, Simplify Details 0.06, Edge Color 0, Detail Strength 1.00, Detail Size 0.42, Brightness 0.16, Contrast 0.18, Saturation 0.08, Line Rotation 0, and Glow Spread 0; Secondary Glow Glow Type Light, Glow Strength 0, Effect Sharpness 0.54, Electrify 0.11, Simplify Details 0, Brightness 0, and Contrast 0; Color Overall Saturation to 0.62, Red Sat to 0.44, Yellow Sat to 1.00 Yellow Lightness -0.36, Green Sat 1.00 and Lightness -0.51, Aqua Lightness -0.36, Purple Sat 1.00, and Magenta Sat 1.00 and Lightness 0.50. Set to Screen blend mode at 66% Strength; and no Finishing Touches.) The Layer was set to Overlay Blend Mode at 96% layer opacity. A black layer mask (CTRL+click on layer mask icon at bottom of Layers Panel) was added and just the areas I wanted lines to show through were painted back. The Layer Style was opened (double-click on the layer) and on the Underlying Layer slide, the white tab was split (ALT+click) and set to 178/255 before exiting the menu. A stamped layer (CTRL+ALT+SHIFT+E) was created above and the now free Nik Color Efex Pro 4 was opened. Three filters were used: Midnight with no Blur added, and overall opacity of 73%; Reflector Efex set to Gold with the light coming from bottom up; and Vignette Filter using a darkish brown color and centering on the focal point. Next the also free Nik Viveza 2 (downloads with the above plug-in) was opened and just one control point was placed in the center area to add a little more structure and whitening to the focal point. Last step involved using a New Layer to clean up lines – Grut’s – MI Swish Mini Mixer brush was used to break up the edges of some lines that were too sharp – I love this brush! Check out his other brushes too – so many wonderful ones! This image turned out to be a lot of fun and created a very different type image! 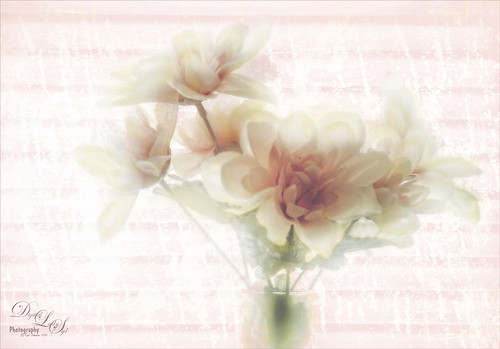 Another double-exposure image – used the same Nikon 18-200 mm zoom lens sets 150 mm and F/5.6. This was shot with white blinds behind the flowers in a vase and sunlight strong outside. This time for the first exposure just the focus was set to a very soft blur, then the second focused in on the flower to get this soft effect. The double-exposure created an almost translucent feel in the flower petals by shooting into the lighter background. In Lightroom just a few adjustments were made before going into Photoshop. On a duplicate layer, Topaz Lens Effects Diffusion filter was added. Then Nik Color Efex Pro 4 was opened and the Glamour Glow filter and Film Efex Vintage filter (Film Type 13) were stacked. A pink pastel texture of mine was added on top and set to Darker Color blend mode with a layer opacity of 55% – a layer mask was added and the texture was gently painted off the flowers. 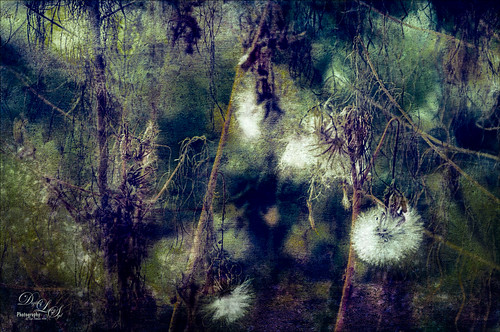 These dandelions were shot using the same lens at 170 mm and F/5.6. Once again, the background was really defocused for the first exposure and then brought the foreground dandelions into focus for the second. My first thought was to convert this to a black and white so it was brought into Photoshop and the free Nik Silver Efex Pro 2 (downloads with the other Nik plug-ins) was opened. The Fine Art (high key, framed) preset was selected and the frame removed. Then a Finishing Adjustment using Toning 22 was used to give a warm tone to the overall image. There are lots of really great sliders in this plug-in so give them a try! It was set to 75% layer opacity and actually gives a really nice look at this point. But to get an artistic feel in the image, first 2 Lil’ Owl’s (see sidebar at my Tidbits Blog for website link) Stained Plaster Collection 17 texture was added to the image and on a layer mask, the foreground dandelions were painted back without the texture. On a stamped layer, Topaz ReStyle was opened and the Brandeis Blue preset was applied. Next another 2 Lil’ Owls texture called After the Rain 14 was added and set to Multiply blend mode at 85% opacity. Another one of her textures was added called Grunge 27 and it was set to Color Dodge blend mode. This added some texture in the bottom foreground – a black layer mask was used to remove all of the texture except this area. That is what was done to get the final image.

I hope this was not over everyone’s head – it really is just a way to change up an image and possibly get a different result. Many people go to much more extremes on shooting the double-exposure adding very different items, more like the first image. And many people are into creating silhouettes for the first exposure and then shooting small flowers for the second exposure for some incredible results. Since I am rather new at this, I stayed pretty basic with this. It does sound like it would be fun so I may have to try that for second go-round on this topic. Therefore if you just want to try something new, give this a try. It is a lot of fun and the final effects can be quite dramatic!…..Digital Lady Syd