HOW TO ADD SOME LOCALIZED GLOW TO YOUR HOLIDAY IMAGES 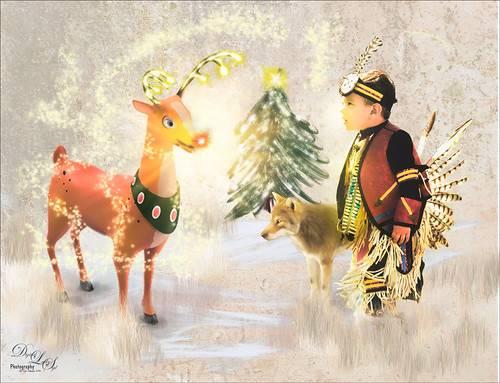 This week I wanted to do a quick blog on how to get that Holiday glow look that is so nice to have in Christmas cards or Holiday Facebook/Instagram images. The above is definitely a composite image. I will say this image took several hours to get to a point where it began to look like the image I envisioned.

When I started out, I knew I wanted to do a Christmas theme and wanted a child to be part of the image. So first the image of the Native American boy was found from in a batch of pictures taken several years ago from a festival. I love to go to these festivals as the costumes and people are just wonderful! The boy had to be removed from the background, so in CC2017, the Select and Mask panel was used to get a really nice cut-out. I always have to go back into the layer mask and do a bit more tweaking. The mask was applied and this layer was moved into a New Document to start the composite. Since PixelSquid is my go-to program for finding objects, the reindeer and wolf were downloaded from them and lined up in the document with the child. (See my How To Use the PixelSquid Add-on in Photoshop blog.)

Glow Effect 1:  Now for some Glow – highlighted the reindeer layer and took it into Corel ParticleShop to add some pizazz and turn him into Rudolf. Last week I did a blog on this, and am using the same brush set here. (See my Intro to Corel ParticleShop Brushes for Photoshop blog.) The Cluster brush was used to add the glitter to the antlers. The Flame brush was used to add some snowy feel to the ground. The Light brush was used on the nose to get a shining light – added red color first, then yellow and a dab of white to finish it off. The Hair brush was used to create the background Christmas tree with the Cluster brush set to white to add snow on it. Back in PS just the changes were on their own layer. This plug-in is actually very easy and a lot of fun to use!

Next some grass was added and a background texture (French Kiss’s le Petit Chateau – for website link, see sidebar at my Tidbits Blog) was placed just above the white original background layer. The neutral color fit the image as too much color would have drawn the eye away from the story.

Glow Effect 2:  This week Pretty Photoshop Actions gave away a really nice Photoshop Action called Holiday Magic. (Sign up for the newsletter to get some great give-aways all the time!) This is a really nice action but their video needs to be watched to really understand how it works. It contains overlays, brushes and the 3 major actions. In the above, the Book Glow action was run first, which added the extra lightness around the nose to indicate a large glow. Next the Brush Applicator Action was run where the fancy snow flakes were added around Rudolf and the tree using their supplied brushes. There is one trick you need to use if you want to run the action in the middle of your workflow. At the point where the actions needed to be added, I had to create a stamped layer (CTRL+ALT+SHIFT+E) and name the layer “Background” before running the action. The action will be looking for the Background layer for it to run. Once I finished up with the action, this Background layer was deleted so more editing could be done on all the layers.

Lots of clean up layers were added to get the exact color effects. Several Color Fill Layers (set to Color blend mode and various layer opacities) were used along with many Curves Adjustment Layers to tweak the contrast. What really brought the effect together was creating a stamped layer on top and applying Lucis Pro 6.0.9 (I so wish this plug-in were still available as it is really incredible), and set to a high Smooth of 21 and just a little Detail adjustment of 189. Then this layer was set to 60% layer opacity so it was not too soft.

I do not expect you to do all these steps, but I wanted to give a good example of what can be done with a few nice tools. The Glow effect got me thinking about what wondrous Holiday effects could be achieved with composites. I find creating composites takes a lot of work but I always feel good about them when finished. 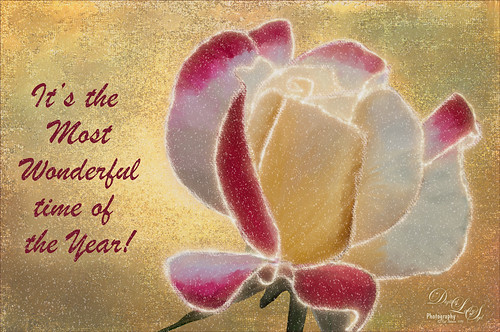 This rose is a pretty basic example of a Christmas Glow that can be achieved pretty quickly. This rose was taken at the Harry P. Leu Gardens in Orlando, Florida. It is a painted image using regular and mixer brushes in Photoshop – nothing too hard about painting this image so no special brushes were required. After painting, used Photoshop’s Select and Mask to select the flower. The layer mask was applied and two of my Corel Painter backgrounds were added under the cut-out flower.

Glow Effect 1: Once again, Corel ParticleShop was opened up and this time the Cluster brush was set to Size 156 and Opacity 45% set to a glow yellow color – painted around the flower to get the lit up effect. Used the Eraser brush in the plug-in to remove any mistakes. If the colors look a little strong on the PS layer, use a Hue/Saturation Adjustment Layer and clip it (ALT+Click between the layers to clip) to the layer to desaturate just the ParticleShop layer. Mine looked real orange.

Glow Effect 2:  The glow was just not quite enough for me.  Aaron Blaise’s Canvas Texture Brush Set 42 3 is a brush that has a slight edge around it so the strokes will give a glow effect when used with a lighter color. It amazes me where you can find that special brush from ones you already own! The foreground color was set to a bright light yellow and on a New Layer, the Cluster brush lines were painted over again. This layer was then adjusted down to 95% layer opacity.

My snow overlay was set to 32% and can be downloaded free at my Deviant Art site. I think this gives yet another nice Holiday card effect that you might be able to use.

Know everyone is very busy at this time of year, but hope you got a few good ideas for adding a little Holiday Cheer to some of your images. Have a good week!…..Digital Lady Syd

This entry was posted on 12/03/2016 by sydspix. It was filed under Holidays, Photoshop Filter and was tagged with Lucis Pro 6.0.9, Nik Viveza 2, ParticleShop, PixelSquid.