HOW TO PAINT IN A SNOW STORM 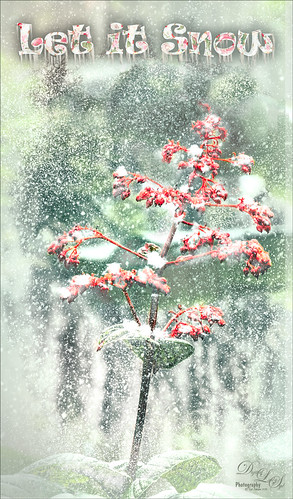 For some reason I have been sort of fixated on how to create a nice wintry feel in an image without getting fake falling and unnatural looking snow. This week I will show a couple ways I use to create a more natural snow and piling up effect in my images. Its a lot in the brushes!

The image above is of a pretty red budded plant (unable to find the name in my resources) that was growing at the Harry P. Leu Gardens in Orlando, Florida. In a short Corey Barker video called Corey’s Universal Particle Brush video, a fabulous brush was created to add the falling snow in exactly the places it needs to be. Corey gives very clear steps to creating this brush that uses PS Noise Filter, PS Gaussian Blur, a Levels Adjustment, and Gradient Tool to make the basic brush. Then changes are made in the Brush Panel to the Shape Dynamics, Scattering, Transparency, and Brush Tip sections. This brush was then saved as both a brush and Tool Preset – size is 1000 pixels. Corey uses this brush not for just snow but anywhere that particles are needed like fire sparks and rain effects.

Now to processing the image. Once some random flakes are added to the image, Corey suggested adding a subtle Motion Blur to the flakes (Angle 75 and Distance 11) which makes the flakes look more realistic without doing anything else. Add a New Layer and make the brush smaller (500 pixels) to build up more dense snow around the plant branches. The layer opacity can be controlled for each snow layer to give the effect wanted. Also layer masks can be added to remove flakes where unwanted. A stamped layer was placed on top (CTRL+SHIFT+ALT+E) and Topaz (for website link see sidebar at my Tidbits Blog) Black & White Effects was opened. In the filter, the Local Adjustments brush section was used to bring back the color in the image where I wanted it. The filter’s Color Brush was used to paint in the red buds and using a lower opacity, the green leaves were painted in. This softened the background a lot but color could still be introduced – in PS the layer opacity was set to 76%. On a New Layer more snow was painted in using the smaller sized Particle Snow brush again. This is how the lower leaves show snow building up on the leaves.  A basic Mixer brush was used on a New Layer to add dabs of white paint for snow – I used Fay Sirkis’s Pet Pastel Underpainting Highlight Photoshop brush (I can’t seem to locate a resource with her brushes right now). But any small sized Mixer brush (45 pixels) will probably work – in the Options Bar set the mixer combination field to Dry and turn on the Load the Brush After Each Stroke with  the color set to the snow color and just paint in the snow. Next a text layer with some icicles hanging from the letters were added on layers above using the free Frostbo Ice Brush 01 for the icicles. The last step was a Levels Adjustment Layer to adjust the contrast. I feel like this plant looks like it is in a “winter wonderland” and not a sunny Florida garden. 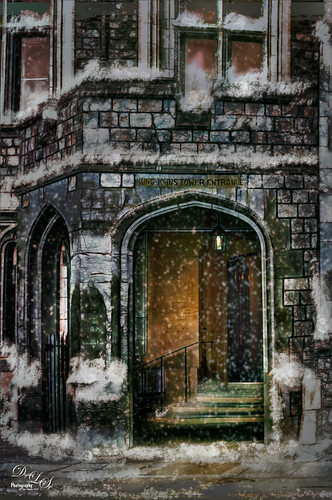 This image of the St. Johns Tower Entrance to apartments at Windsor Castle turned out to be lots of fun to convert to a spooky winter image. The original image was taken on a sunny day in August so it has definitely been winterized. First Topaz Clarity was used to sharpen the image overall. Then the Adaptive Wide Angle Filter, Topaz Glow, and Lucis Pro were all used to get a really sharp and correct image. At this point I was just trying out different plug-ins and this is what I ended up using. Now the snow was painted in. A free set of very basic star brushes was downloaded by KeReN-R on DeviantArt and 4 brushes were used to paint in a lot of the snow (Sample Brushes 4 – see next paragraph on how to adjust this brush, 6, 8, and 19). Also Grut’s FX Inky Leaks Bottle Topple and Romato brushes were used to give the wet slick look on the street and steps (many brushes in this set would make great snow brushes). This step was a lot of fun to do! At this point Corey’s Particle Brush could be used, but instead I took the image into Topaz Texture Effects 2 and used the Winter Day I preset which contains a snow texture. A Spot Mask was used on the entrance so it could be adjusted a little differently. Back in PS the layer was duplicated and a Gaussian Blur with radius set to 250 pixels to really blur the image. Then it was set to the Subtract blend mode. The same entrance area was painted out in a layer mask. This darkened the image down immensely. On a New Layer white was painted in the entrance and set to overlay blend mode. Another New Layer for snow was used and some snow effect painting around the doorway in front using the Grut Bottle Topple brush. On a stamped layer Nik Viveza 2 was used to really pull out the lighting effect in the doorway and to darken down the on the street. There was a lot of trial and error on this image and I personally believe that is how to actually pull this look together.

I am using Sample Brush 4 in the KeReN-R Star Brushes a lot to get the nice piling up effect of snow. These settings were changed in the Brush Panel to get a really great snow smoothing and piling brush:  In Brush Tip Shape:  Change size from 773 px to 150 px and leave Spacing at 25%; check Shape Dynamics and set Angle Jitter to 9%; and leave all other settings alone. In the Options Bar turn on the icon next to the Opacity amount so pen pressure will increase or reduce the amount of snow added. This creates a really nice brush to build up snow in any image. 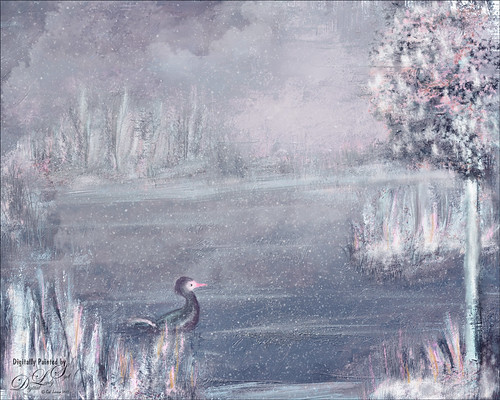 Above is an image I painted showing how a duck sees the beauty in his home during a light snow that we humans do not get a chance to appreciate. It was initially painted in Corel Painter by first adding a lot of the basic elements and grasses. Just enjoying painting at this point. Then the image was opened in PS and many more details were added. In this case the snow was painted in using Corey’s Particle Brush and the snow was built up using the Snow Build Up brush (sampled brush 4) and sampled brush 6. Many more plant elements were added along with the duck. Topaz ReStyle was used to change the color scheme from a warmer one to a color for a more wintry look. This is a good example of how to use these snow brushes when doing creative painting.

It is very handy to have the snow in brush format as opposed to a large vector overlay. I hope you will try creating these two basic snow brushes if you enjoy making wintry scenes. I am still experimenting with them, and trying out other brushes. I like the overall effect of these two brushes and am using them a lot to just add a little wintry effect to a cooler image. Until next week…..Digital Lady Syd