HAVING SOME SUMMER FUN! 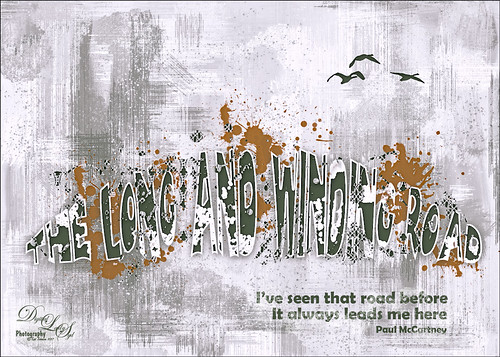 This week I am just taking it easy and playing around with some text and images. Sometimes you just have to let the creative side play and see what happens! Anyway, this is how Digital Lady Syd takes a break! I just can’t get away from Photoshop! I do not usually use other individuals’ images, but for practice it is great – I do not see me getting to these beautiful mountains soon! There are many resources today if you would like to try a few new things.

In the image above a text layer was placed in a new document – the font used was from a CD bought years ago by Cosmi called 04, a fabulously fat font. The Create Warped Text icon on the Options Bar was double-clicked and in the Warp Text dialog, a Style called Arc Upper was selected with a Bend of +50%. A Stroke Layer Style was set to a Size 7 px, inside set to Color white. The Default Drop Shadow was added. Some splatter brushes from French Kiss (for website link see my Tidbits Blog sidebar) were used above and underneath the text to add the crazy effect. A Pattern Adjustment Layer using a lace pattern was clipped (ALT+Click between the layers) to add a lacy effect in some of the strokes. (The Pattern used was a black and white lace texture from a set redheadstock at DeviantArt called Lace Photoshop Patterns.) The SS-Groping 1 Flying birds are also from redheadstock and set to 73% layer opacity. One of my painted textures was placed on the bottom and a Black and White Adjustment Layer was used to desaturate it. On a composite layer (CTRL+ALT+SHIFT+E) Topaz (for website link see my Tidbits Blog sidebar) ReStyle was applied using the Snow Cover II preset with a few adjustments to the Color and Tone sections. The lower text font was called Berlin Sans FB Demi. On a layer above the text, Grut’s FX IL Bottle Topple brush from his terrific Inky Leaks Splatter brushes was applied to slightly cover the text – set to 64% layer opacity (and do not forget to look for his free brush of the week – it is a great way to get introduced to his big selection of brushes). 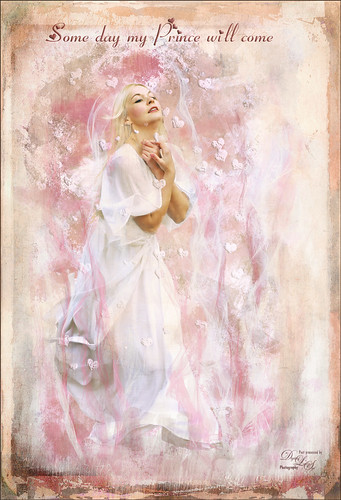 The original of the woman shows her standing in the middle of some orange colored leaves – I think she looks like a princess! (See Kuoma Stock Haunted 13 for original image at DeviantArt.) The woman was extracted from the background using the Select and Mask Command. Another one of my painted backgrounds was added and a couple layers of splatters were added behind the girl. Color was added to her face and nails and hair added into the image. On a New Blank Layer heart brush was created from the Custom Shape Tool (in Options Bar select the Heart Shape and set the 2nd button to Shape; go to the Paths Panel and click the Create a Selection icon at bottom; go back to Layers Panel and fill selection with black by ALT+Backspace to fill; with Marquee Tool, select the black Heart and go to Edit -> Define Brush Preset and name Heart). Settings for the brush are: Brush Panel’s Brush Tip Shape Spacing 25%; Shape Dynamics Size Jitter 93%, Control Pen Pressure, Angle Jitter 12; Scattering Both Axes, Scatter 1000%, Count 1, Count Jitter 0; Color Dynamics Apply Per Tip, Foreground to Background 8%, Hue 7%, Sat Jitter 2%, Brightness Jitter 7%, and Purity -36%; Transfer Opacity Jitter 20% and Flow Jitter 32% and Smoothing on. Two New Blank Layers were used to add in different colors (white and light pink) hearts – one layer’s Layer Style ws opened and set to Bevel and Emboss to add a little texture to some of the hearts. Topaz Texture Effects 2 was opened and the Breaking Down preset was applied with the Spot Mask used to remove effect from her face. Duplicated the layer and opened up the Corel Painter plug-in (I am still using the old version) – the Flame brush was selected and pink and light color flames were painted just for fun. The old frame is from the Scrapbooker itKuPilli and is in a set called Amazing Grapes (could not locate). The font with the hearts is called Fiolex Girls. On top 2 Lil’ Owls Color Bokeh Grunge Set texture 4 (for website link see my Tidbits Blog sidebar – this is one of my favorite sets) was applied and set to 38% layer opacity. 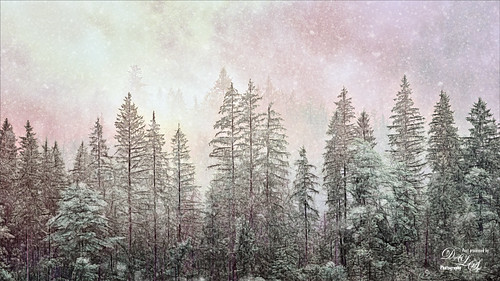 This is also a wonderful Unsplash photo by Johannes Plenio called Winter. I got a little carried away post-processing this image until it was brought to my attention that it looked like a raging forest fire – I thought it was an incredible sunset! (See below.) Just an example of good intentions that turned into not so good post processing. Anyway, just a little tweak from Topaz ReStyle and now it is a beautiful wintry image. So most of the dramatic changes were done in the new Topaz Studio using Sharpen, Radiance, Color Theme, Texture and HSL Color Tuning sections (I created a preset called SJ Forest Landscape in the Community if you have downloaded the plugin and would like to try it out). For more info, see my Introducing the Free Topaz Studio blog. This created the sunset look, but also created the nice sharp tree trunks and edges. Back in PS, two Curves Adjustment Layers were used to adjust the RGB curve for contrast, and then the Color using the individual Channel Curves. Next a Levels Adjustment was applied as it just looked good. Then a Black and White Adjustment Layer adjusting the color contrast sliders just a little and then set to Luminosity blend mode. And finally a Selective Color Adjustment Layer adjusted the Yellow color so the little tree on the left showed up better – set the layer mask to black (CTRL+I inside the mask) and painted back just the tree. 5 New Blank Layers were added and set to Overlay blend mode and with a soft round brush, various areas were highlighted with white, yellow, and sky colors. The layer opacities were reduced to taste. It was now a raging fire image! Oh my gosh! Okay, here is a small image so you get the idea and see how powerful ReStyle can be. 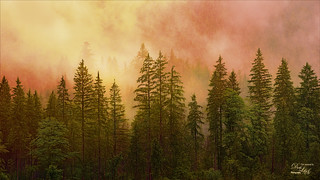 Quickly Topaz ReStyle was opened and the Snow Cover II preset (once again) was applied with very few changes – just a few Tone and Detail changes. It was amazing how this preset was able to transform the image. In PS a New Blank Layer was added and Grut’s FX IL Dry Grit brush was used from his set above and snow was painted lightly on the trees. My free SJ Snow2 Overlay slight Blur was added at 75% layer opacity to give some nice snow effect. The Shadowhouse Creations Snow Overlay 11 (his resources are the best!) was added to give a little more snow dimension – it was set to Screen blend mode at 70% layer opacity. The last step added Matt Kloskowski’s vignette (see my Fun Photoshop How to Create a Subtle Vignette Blog.)

Hope you got a few ideas with this sort of lazy Summer Day Blog – have a great week!…..Digital Lady Syd

This entry was posted on 07/08/2017 by sydspix. It was filed under Photoshop Brushes, Text Effects, Textures and was tagged with Topaz ReStyle, Topaz Studio, Unsplash.