TOPAZ STUDIO – SHOULD I UPGRADE? 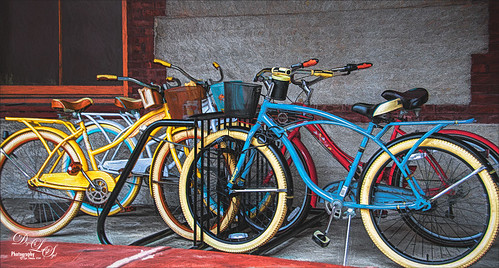 Just enjoying a little Topaz Studio and trying to really understand the program. Bike image is from Flagler College in St. Augustine, Florida. (See Image 1 below to see what Topaz Studio adjustments were used to get this effect.) Will be skipping a week of blogging. Several people are very confused and uncomfortable about upgrading. I understand the hesitation since the upgrade into the new Studio interface has not been easy to understand. From the software engineer’s perspective, it has probably been a nightmare since the various plug-ins do very different things and they have to be retooled to work together. Some of the Studio plug-ins have some good updates that really help the program. Others, maybe not so much. I can only say this, even if you update to Topaz Studio, you will have the Topaz Labs filters still available and can be used on a layer in PS as before. I use them often, mainly for one reason – all my personal presets are still in the Labs plug-ins and Topaz Studio cannot reproduce lots of them. With many of my presets I just have not had the time to update them.  Therefore, it is probably okay to upgrade to the free Studio interface since you will still have the Topaz Lab versions available in the Filter menu. And not only that, if you are in Studio and want to access one of the other plug-ins, just go to the Menu and select Plug-ins – they are also all there with their original interface. I find that having the Studio Clarity (the Precision Contrast adjustment) and Detail (the Precision Detail adjustment) available in one location is very handy – together they give some startling sharpness! And oddly enough, the actual Impression Adjustment has some decent beginning settings and the Painting Progress slider gives some very interesting results. If you download the free Topaz Studio (for download link, see sidebar at my Tidbits Blog), any Topaz plug-ins will be automatically added into the interface (PS lists this as Filter->Topaz Studio-> and the different types – while the Filter -> Topaz Labs are not touched). It will look different and some experimentation will need to be done, but there are lots of new options since the different adjustments from the different original plug-ins can be stacked to get even better looks.

At this point, here is a list of the filters that are now included in the Studio interface and which filters create the basic filter. If you owned the Topaz Labs filters, all the Studio adjustments filters will show up without buying the Pro Pack extra adjustments. To find the incorporated filters, need to go to the preset pop-out and click on the square icon with three horizontal lines in it. Set the Sort By to Featured. The first preset will indicate the Studio Adjustment workflow for each filter (for example, select Clarity and choose top preset called Clarity Workflow – the two adjustments to create the basic filter will be shown).

Clarity – Studio Adjustments are Precision Contrast and HSL Color Tuning (look at the Topaz Labs version and it is broken down into these two main components). Topaz did bring over my created presets with this filter and they also appear in the My Effects Group.

Detail – Adjustments include Precision Detail, Channel Mixer, and Basic Adjustment. (The Topaz Labs version was broken down into Detail and Tone, the Channel Mixer which is the Cyan-Red, Magenta-Green, and Yellow-Blue sliders, and the Basic Adjustment which basically contains the other Tone and Color sections’ sliders). Several of these I reproduced.

Glow – Adjustments include Glow, HSL Color Tuning, Vignette, and Smudge. (The Topaz Labs version has sections called Primary and Secondary Glow with same sliders that pop out in some cases in Studio, Color which is the same as the HSL Color Tuning, and Finishing Touches which includes the Smudge slider). None of my presets were brought over from the Labs version.

Impression – Only contains the Impression Adjustment. My presets were brought over from Topaz Labs and also appear in My Effects group.

Simplify – Contains Abstraction, Edges, and Quad Tone adjustments. None of my presets came over from Topaz Labs.

Textures – Contains the Basic Adjustment, Edge Exposure, and Quad Tone adjustments. No presets were brought over from Topaz Labs. They have added in new textures from 2 Lil Owls Studio and Hazel Meredith. 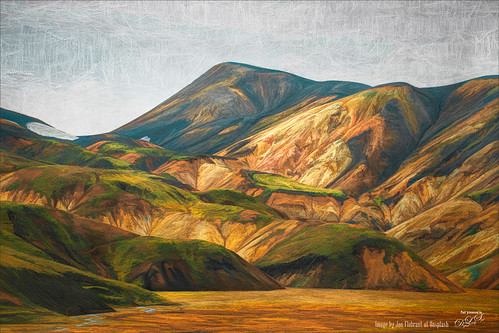 This image contains exactly the same settings as the image above except a 2 Lil Owls Studio Texture Adjustment was added at the bottom of the stack. (See image below for more information.) Image from Unsplash and Jon Flobrant. 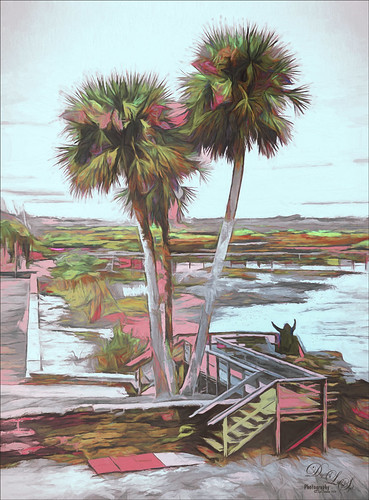 This image is of some palm trees taken on the top of the Castillo de San Marcos in St. Augustine, Florida – the creative coloring was done in Topaz Studio. I find a lot of the tips for Studio by watching the videos Topaz Labs supplies. Even if you do not like what the presenter is creating, often you can get a couple good ideas for some presets that make for some good results. That is what happened on this one. First a preset that I made from some of the settings in Hazel Meredith’s video called Texture Effects and Topaz Studio that I named SJ Graphic Sketch 1 (it is available in the Community on line) – makes for a very nice black and white image. This was applied and a preset called Cartoon Grid from Topaz that gave the partial colored effect. (See Image 3 below for more information on this image.) I saved it down as a project file .tsp file, but it did not take. So at this point I am not sure this format is really safe to use. Luckily I had noted the settings.

I hope this has helped a few of you decide to try out Studio. It is a pretty nice program overall and it will get better as they add more Topaz Labs plug-ins and new features into it. But it will probably take a while to get it all finished I am sure. In the meantime, parts of it are really good. Have a very good week!…..Digital Lady Syd

Image 1: This image was first opened in Lightroom and just the Basic Panel was used before opening up in Photoshop. The next step was to duplicate the image and open Topaz Studio. These are the settings that were used: Precision Contrast: used Highlight Dynamic Range in dropdown; Abstraction: Used JWolfson Painting Prep in drop-down (Joel explains how to create this in his Topaz Labs video he did this week – I will add link when it is posted), then changed Simplify Size to 0.24; Impression SJ Colored Pencil preset: changed Stroke Width to -78, Stroke Length to -0.85, and spill -1.00, then set Texture to Solid; and used HSL Color Tuning – changed Orange Sat -0.40, Yellow Sat 0.55, Aqua Sat 0.63, and Blue Sat 0.39 and Lightness 0.13, and Details 0.50; Created Subtle Colored Pencil preset which is posted in the Community presets if you would like to use it. Back in PS, used a Red Channel Luminosity Curves Adjustment Layer, Nick Viveza 2 to add a slight vignette in corners, and a Levels Adjustment Layer setting Output levels to 31/255 and regular settings 0/0.76/255 – gives the slight matte feel.

Image 2: The Unsplash image was opened in Topaz Studio stand alone program and used exactly the same steps above except the HSL Color Tuning sliders were used to adjust the colors in this image and a Texture from 2 Lil Owls was added at 28% layer opacity and Luminosity blend mode. It was opened in PS and the same steps as used above were done.

This entry was posted on 02/17/2018 by sydspix. It was filed under Topaz Studio and was tagged with Nik Viveza 2, Topaz ReStyle, Topaz Studio.