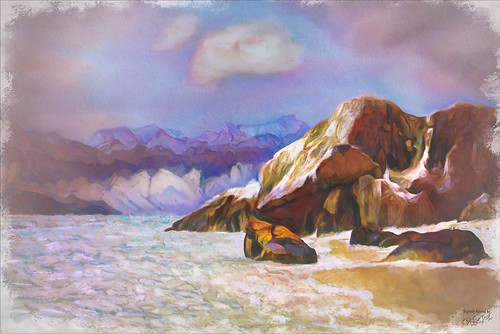 I find Topaz (for website link, see sidebar at my Tidbits Blog) Labs and/or Topaz Studio is totally in a “league of its own” when it comes to helping digital artists take their images to a new level. Even though I have blogged about Topaz plugins and most recently Studio’s AI Remix adjustment (see What is Topaz AI Remix????), this week I am presenting a short blog and video on how I created this image using some of the Topaz Studio’s and Lab’s plugins.

The products that really are outstanding to me for creativity are: Topaz Studio AI ReMix adjustment, Topaz Studio (and previously Labs) Impression, Topaz Labs ReStyle, and, believe it or not, this wonderful little program no longer marketed called photoFXlab which uses an InstaTone program section (the 500 px and 1X.com do not work, but the other three do so it works just fine) (See my short InstaTone in photoFXlabs – Great Fun and Great Results! blog). This is not to say that many of their other plugins, like Topaz Adjust, Black & White Effects, Glow, and Texture Effects are not useful for the creative – they are great but maybe not as unique as the ones I mentioned.

AI ReMix adjustment fits right into what I like about Topaz products. It has a bit of a steep learning curve to figure out what works and what does not when trying to get that creative uncanned look. That is why I decided to do this quick blog and video. The original image was beautiful and is from a group of photos at Deeezy called 20 Free Photos from Seychelles – I like to practice with some of these free images. I did not realize I would like the results but since it has an interesting artistic appearance applied, it does not matter that I did not use my own equipment for the image. Wish I had been there to do so. If you do not see the You Tube link in your browser, please open the video from within the blog.

Steps for Post-Processing the Top Image

Once opened in Photoshop, the image was duplicated and taken into Topaz Studio where two adjustments were used: the Impression Adjustment (used Default settings but set it to Stroke Type 09) and AI ReMix (used my SJ Soft Painterly Effect in Preset dropdown and adjustment 0.27 opacity – the SJ Soft Painterly Effect has these settings:  Opacity 0.27, Style Strength Low, Col 7/Row 3 swatch, Brightness 0.53, Contrast 1.17, Saturation 0.98, Hue 0.04, Smooth Edge 1.00 and Sharpness 0.50). Back in Photoshop, many tweaks were made since the adjustments had added a great creative starting point. I will not go through all the steps – they were quickly reviewed in the video – but it did take a bit of work to get the image to a place that worked for me. Nik Viveza 2 was used to help direct focus and there was a spotlight effect layer. John Derry’s Impasto Varnish Smooth layer style (no longer available-Kyle Webster had some also but I cannot find them either – try searching for Photoshop Impasto layer styles. Basically what is going is that a Bevel and Emboss layer style is added and the Layer Fill slider is set to 0 – preferably use a brush with some interesting edges to paint add the painterly effect on the layer). Used my SJ Pastel 3 favorite brush to paint over a few waves and rock edges to add some additional definition. Then a texture called Solstice Elan2 from French Kiss (for website link, see sidebar at my Tidbits Blog) was added – the same layer style was used on the texture set to 22% layer opacity to soften the whole foreground effect. Then added a frame I created in Corel Painter was added for a final more painterly touch. 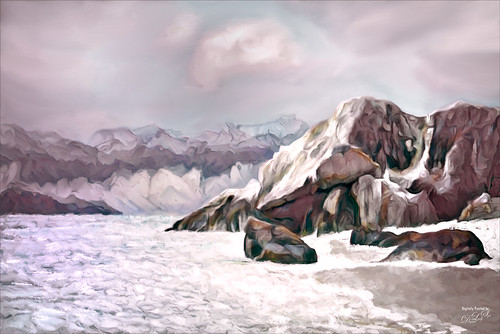 Steps for Post-Processing this Image

Same steps were as above with the same Topaz Studio Impression and AI ReMix adjustment settings and clean up layers. To get this different effect, a stamped layer (CTRL+ALT+SHIFT+E) was taken into Topaz ReStyle and I used my SJ Tulips preset with changes to some of the sliders. This preset was created from a tulip image previously processed in ReStyle (see my How to Use a Topaz ReStyle Trick for Improving Your Image blog). You can actually get a very similar effect as the ReStyle filter gives when photoFXlab Instatone is opened and applied. Nik Viveza 2 was also used and Curves Dodge and Burn adjustment layers were also used. A little clean up and spotlight effect was applied but no impasto layer styles.

One thing noticed was that by applying so much post-processing to an image that was not as high a quality as a RAW file, some artifacting became apparent. On the cooler image below, I rather meticulously painted away the artifacting in the foreground mountain and rock formations mainly using a very tiny (3-9 pixel) brush at 50% strength – this took several hours and could probably use more. On the top image, I got smarter. It occurred to me to just use the Spot Healing Brush set to: Content Aware, Multiply, and Sample All layers using a small brush around 7 pixels. Just smeared long strokes over the areas – only the white artifacting was healed (colored in), but the color in the darker areas was left alone. It took about 10 minutes instead of several hours. Wish I had thought of it earlier before hand painting and healing the first image.

Anyway, I thought it might be fun for you to see how these creative plug-ins can be used together. Below are a couple recent blogs you might have missed on my Tidbits Blog showing some other image examples. Hope everyone is enjoying the Spring – looks like the weather is starting to improve finally!…..Digital Lady Syd