SOME CREATIVE EXPRESSION IN PHOTOSHOP 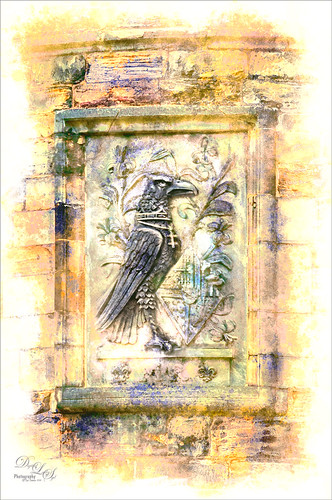 This week I am taking a break from the technical aspect of Photoshop and am presenting a couple images which is what I consider was a lot of fun create in Photoshop. Usually when I do creative art, I start out going in one direction and end up in another. Many times there are several iterations of an image I really like, which happened in this first image – it looks pretty good in blue tones and warm tones.

The image above is from Palace of Holyroodhouse in Edinburgh, Scotland. I love to photograph the interesting details in the historical architecture that is so prevalent in Europe. The workflow for this image was actually pretty simple. Just using my basic workflow and through in a bit of Nik Viveza 2, Topaz ReStyle and several Adjustment Layers. This was definitely created with a lot of experimentation.

The image below went a totally different direction where the elements were added onto a blank layer. 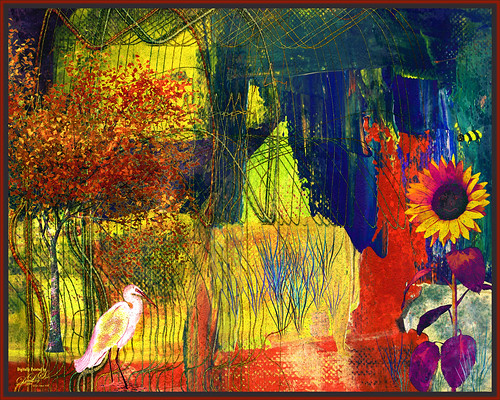 This Heron had this crazy idea of what he would like to be his playground. I just had to follow his lead and created this rather “groovy” looking image. Started with this really beautiful background from Unsplash by Steve Johnson that had all the bright colors in it.Then just used several elements – some I created and a few are from other people. The really weird line art in this image is from a large Cruise Ship at night taken from a small sailboat – got sort of a creepy result that looks kind of good here but was very scary when you actually are there! My bird chose it anyway. All the elements were added to New Layers also. The sunflower is from PixelSquid. The bee is one I painted. The Tree is also from PixelSquid and the Heron is my pet, the little guy from Graphics Fairy – painted him up a bit with one of my favorite Grut charcoal brushes, Shin Ding which adds great texture on anything, to give him some matching color. The Grass is from Frostbo Set 1 Grass 03 brush. I actually added a little touch of Impasto effect on the orange block on the left using a blank layer set to 0 Fill opacity and painting with the Grut Shin Ding brush to add the texture on it. Last step I added the border using the one I created in my video and blog on my How to Create a Quick Layer Style Border or Frame.

One thing I have learned is not to throw out those really weird images you get – sometimes they can turn into something quite  interesting! Hope you enjoyed it! Have a great week!…..Digital Lady Syd

This entry was posted on 04/28/2018 by sydspix. It was filed under Photoshop Filter, Topaz Studio and was tagged with Nik Viveza 2, Topaz ReStyle, Viveza 2.