WHAT TO DO WITH A PLAIN WHITE CUP? RECYCLED! 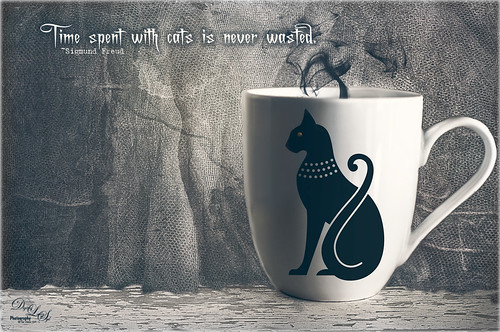 This week I am presenting an “oldie but a goodie” from my archives of several years ago. Keeping with the vein of the original post, the above image was created today using the same cup and the same wood floor from the image below. The lace curtain background texture was from Shadowhouse Creations and Luminar’s (for website link, see sidebar at my Tidbits Blog) Flex plugin applying the Enhance Detail and Structure filters to get the beautiful sharpness in the texture – used a mask in the program to paint out the cup. The Egyptian cat is from Skybox Creative. The font is A Charming Font Expanded. And yes, I drink my coffee out of the mug all the time! Hope you enjoy it!

I am a huge fan of Kim Klassen textures and her type of photography. I joined her test kitchen a few months ago (no longer active) and have learned much from her site. All the images in this blog use the same beginning shot. This plain white cup was bought from Tuesday Morning for just a couple dollars. The picture was taken by placing the cup on a white piece of cardboard for the bottom and a 22″ X 14″ Elmer’s Tri-Fold Display Board (found in WalMart). It was shot using a 60-mm macro lens at F/3.2 for 1/60 sec and was taken on a table near a window where there was natural lighting. In Lightroom only the basic sliders were adjusted and some chromatic aberration was removed.

Since I wanted a bit of a vintage feel for the top image, Caleb Kimbrough’s free Old Wood 4 texture was used for the floor. All but the bottom area was painted out and the opacity was set to 25%. The canvas was expanded on the left side of the image by using the Content Aware Move Tool. Next Kim Klassen’s iAm texture was applied using Soft Light blend mode at 100% layer opacity. Her marchtrio totally texture was added using Soft Light at 79% layer opacity. By signing up for Kim’s newsletter, she will send you lots of textures throughout the year – these both were links from her newsletters. A light blue Color Adjustment Layer (#b8bfe0) was clipped (ALT+click between layers) to the marchtrio texture texture to give it more of a soft blue tone – it was set to a 49% layer opacity to lighten up the photo just a little. A New Layer was created and placed between the two texture layers – Kim Klassen’s Cloth & Paper Extras Brush 1084 was selected to paint in light gray on the left side of image at 2285 pixels to add a little more texture to the image and set to 59% layer opacity. Here was the tricky part – a New Layer was created and with Brush Lovers 1941 brush (these used to be posted at BrushLovers.com but they do not appear to be available anymore – but there are many other choices at this site), one click was painted on the front of the cup. The layer was duplicated and set to Multiply blend mode to darken. Then with a layer mask, the highlights and shadows were carefully painted out so it looks like the flower design was already on the mug. I put this in a group (CTRL+G on the two selected layers). Added a Levels Adjustment Layer and moved Output Levels a little left to lighten the whole image and painting back the mug so it shows up a little better. Added text using Batik Regular font and it’s done!
…..

Got into some Hawaiian dreaming on this one. I used an image I had taken while in Hawaii and placed the cup on a sand-like texture. The cataramaran in the water is the whale-watching boat where a whale actually hung around our boat for 5 minutes while we were on it – biggest thrill I had while in Hawaii! (See Topaz Simplify and Lens Effects Saves an Image! blog for image processing.) First the water image was stacked on top of the cup image. Next the cup layer was duplicated and the sky and background were cut out using a layer mask and applying it. It was moved on top of the water layer. My wonderful palm tree clip art objects (created from an image I took of the palm trees that were extracted from the background and filled in with a solid color), and a Bevel and Emboss layer style was added using a Size of 7 px, Soften of 10 px, and Depth of 50%. A dark blue Color Fill Layer was clipped to the tree layer (ALT+click between the layers to clip). Next Kim Klassen’s Cloth & Paper Touch texture (my favorite) was added using Soft Light blend mode at 95% opacity. Shadowhouse Creations Photo Tint Peach was set to Soft Light at 100% layer opacity, and then a Levels and a Curves Adjustment Layer were added to get the right tonal effect. A second Curves Adjustment Layer was used to make the bottom color look like sand and the rest of the image was painted out in the layer mask. A Text Layer was added using FFF Tusj font at 65% layer opacity. An Outer Glow Layer Style was added to the text using a sampled light tan color set to 62%, a Spread of 8, and Size of 193 – this was done to make the lettering stand out just a little from the sand background. The whale is from a Dingbat Font called Flood Font Dingbat m and was set to 47% layer opacity. Painted Textures (Melissa Gallo’s texture that I do not believe is available anymore) Winter Wheat texture from her Cyber Monday Set 1 was applied using the Subtract blend mode at 45% opacity to add a painterly look to the overall image. A Hue/Saturation Adjustment Layer was clipped to the texture and Saturation set to -67 to remove most of the color from the texture. Another Hue/Saturation Adjustment was clipped to the texture – the layer mask was filled with black and just the cup was painted back so no color showed up in the white cup.
…..

Just another example of how to fix up the same image. This time Kim Klassen’s Cloth & Paper touch texture was added behind the cup. A shadow was added to the cup. Fay Sirkis’s Texture Pink Rose (from her Fay’s Master Background Collection at Kelby Training) was used for the beautiful flowers on the cup – just cut out the flower and added as a layer. As you can see a lot of clean up was done to get the cup looking right – just created New Layers and painted by sampling the image to even out the colors. 2 Lil’ Owls The Artisan Coll-Big Set 2-2 texture (see my Tidbits Blog sidebar for website link) was used – it was turned into an overlay using my How to Create an Overlay Out of a Texture blog. Kim Klassen’s Dream Definition was added as text. Two layers using my free Cloud Brushes – Cloud 1 set to 43% layer opacity and Clouds 3 at layer opacity 23%. The last step was a Level Adjustment Layer to add some overall contrast.

This was a lot of fun trying different effects on a very basic image. Not sure which one I like best but it is interesting to see how you can change up an image by using different textures. And thanks to Kim Klassen for her great textures and techniques in creating this type of effect. Until later…..Digital Lady Syd

This entry was posted on 07/06/2019 by sydspix. It was filed under Textures and was tagged with Luminar Flex.