HOW TO USE THE PUPPET WARP TOOL CREATIVELY – RECYCLED 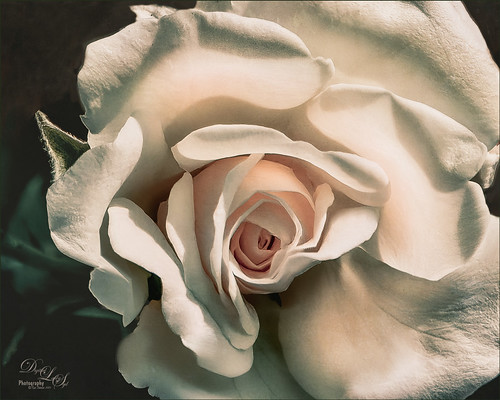 This week I am recycling another one of my “oldies but goodies” where the Puppet Warp is used in a pretty cool way. I added the White Rose image above from the Harry P. Leu Gardens in Orlando, Florida, to show that the petals can be easily adjusted using the Puppet Warp Tool. The rose was much flatter and vertical, but by pinning and dragging around the points, the petals were pulled out to create a much more flattering arrangement. Also applied Topaz (for website, see my Tidbits Blog‘s sidebar) new Adjust AI filter to get the luminous petal effect. To learn the basics on how to use the Puppet Warp Tool (as in straightening buildings or objects), see my older short Tidbits Straightening with Puppet Warp! Tidbits Blog which is still good. And also check out my more recent Puppet Warp Replay Fun Photoshop Blog. In the meantime, enjoy the weekend – I am – nice to take a summer break! Enjoy!…..Digital Lady Syd

Just having some fun with this week and trying some new things out. This is the sign on the restaurant for Jimmy Buffett’s Margaritaville at City Walk in Orlando, Florida. So the reason this is rather “wonky” is because I decided it looked kind of good “wonky!” This sign was at the top of the building and was not shot straight on, so the sign on the right side was further away than the side on the left. There was lots of reflection in the restaurant windows in the original since it was taken during the brightest part of the day – totally awful! And the blue lettering and the parrot were almost indistinguishable in the sign. I thought this would make a good image to experiment with the brushes created in my How to Easily Create a Photoshop Brush for Painting blog. First the image was cropped in Lightroom and then opened Photoshop where it was taken into the Edit -> Perspective Warp command to see if it could be salvaged. It actually did a pretty good job on it but there were a few disturbing areas. It was tweaked using the Edit -> Puppet Warp command and that is when it went “wonky” – I just started pulling and pushing the pins all over and got this really whimsical look that I liked – it looks like the sign is on the top of a sombrero. (For info on how to really use this tool effectively, see my short Tidbits Straightening with Puppet Warp! blog.)

It occurred to me that Puppet Warp is actually very similar to the Warp Tool in Free Transform (CTRL+T). On a New Layer on top the sky was blended using the Creative Toons Mixer brush from my linked blog. On a stamped layer (CTRL+ALT+SHIFT+E) above, Topaz (see sidebar at my Tidbits Blog for website link) Detail 3 was opened and an underpainting look was created. (Here are my settings: Topaz Detail 3 – used Abstraction II preset. Made changes to Tone Cyan-Red -0.69, Magenta-Green -0.12, and Yellow-Blue 0.09; Color Temperature 0.30, Tint 0.02, Saturation 0.05, and Saturation Boost 0.02; and Effect Mask – Painted out the effect off the bird’s face, trees, and Jimmy Buffett’s lettering using a Brush Strength of 0.45, Brush Size 0.11, Hardness 0.66, and Flow and Edge Aware at 1.00; and Overall Opacity set to 1.00.) This layer was set to Subtract blend mode at 89% layer opacity and on a layer mask the lettering was painted out to make the Jimmy Buffett’s lettering show up better. In the Layer Style dialog, the Blend If This Layer black tab was split (ALT+click on the tab and pull apart) and set to 56/77 to really darken down the sky. (See my How to Use Those Handy Blend-If Sliders! blog) How I came up with this I do not know, but on another stamped layer above, the image was inverted by clicking on the layer and pressing CTRL+I – now it was all white looking. A black layer mask was added and just the same lettering was painted back. Looked terrible so a Hue/Sat Adjustment Layer was added to turn the lettering from the ugly yellow to bright red – now you can see it. On another New Layer I used the SJ-Kahara Regular brush from my linked painting blog to paint on the sky around the the bird and trees to make them stand out a little more and add some interest to the night sky. On yet another stamped layer a Camera Raw Radial Filter was added to just the parrot’s head (hum) to bring the focus to him. A Selective Color Adjustment Layer was added to adjust the green color in the image and that was about it. Oh yes, lastly added Jack Davis’s Wow Texture 02 (got this style along with many others from the CD in a little gem of a book called Adobe Photoshop 7 One Click Wow)– this to give a more painterly look. Whew! 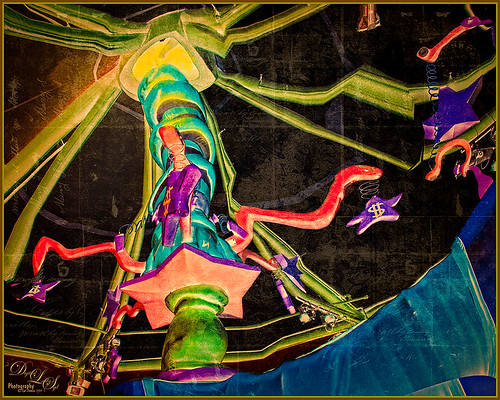 This image was shot looking up at the center from the stairs going up to get on the High in the Sky Seuss Trolley Train Ride at Seuss Landing in Universal Studios Orlando. I really loved the bright colors but was not quite sure what to do with the image. It seemed like a good candidate to try a little Puppet Warping on, so that is what you see. In Lightroom the image was cropped and Seim’s Power Workflow 4 Magic Ugly Shade Fixer preset was used to help with this issue. In Photoshop on a duplicate layer, the Puppet Warp Tool was used. Once again, the mesh was turned off first. Then pins were stuck in each corner to hold the image still. The various pins were placed and dragged to get this crazy result. Back in Photoshop Topaz Adjust was opened and a preset I created called Negative Preset was applied with no changes. (Here are the settings: Global Adjustments Adaptive Exposure 0.07, Regions 50, Contrast -0.02, Brightness 0.00, Protect Highlights 0.02, and Protect Shadow; and Finishing Touches Warmth 0.18, Border Size 0.26; and Vignette Strength -1.00, Vignette Size 0.01, Vignette Transition 1.00, and Vignette Curvature 0.87.) It gave it a bit of the surreal look. 2 Lil’ Owls Studio’s (see sidebar at my Tidbits Blog for website link) Member Freebie of July 2012-57 was applied and set to Hard Light blend mode at 61% layer opacity. The Blend If This Layer black tab was split (ALT+drag tab) and set to 125/191 and the white tab was also split and set to 215/255. This pulled back some of the texture from the image to get this kind of nice effect. Her Ultimate Texture Collection Chalkboard Burgundy was applied at Soft Light and 100% layer opacity. Three New Layers were added with painting on each to smooth out the white highlights in areas that were distracting. A stamped layer was created on top and set to Multiply blend mode and a white layer mask was used to bring back the texture details in the darker areas. Another stamped layer was created and my free SJ Thin Double Edge Frame layer style was applied with the default colors. I think it turned out to look a little scary! 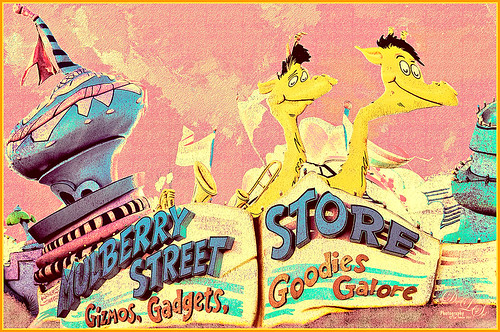 This was just too much fun to stop at one image. The puppet warp was used to warp another store sign in Seuss Landing at Universal Studios. These funny giraffes are from the first Dr. Seuss book called And To Think That I Saw It On Mulberry Street. I wanted to show a painterly image that had very little brush painting done in it – all done with filters and textures. Ran the same Shake Reduction Filter in Photoshop, selected the plain blue sky using the Select -> Color Range Tool, and added Melissa Gallo’s Painted Texture called June Seashore (I do not think it is available anymore) for a bluish sky that looked like painted clouds. Next a new texture by French Kiss called Color Wash Sage was added. What really made this image get this rather grainy illustrative look was in the layer style of the layer (double click on the layer to open). The Blend Mode was set to Color Dodge at 94% opacity and 95% Fill Opacity, and the Blend If This Layer White Tab was split (ALT+drag to get a smooth transition) and set to 224/255; the Underlying Layer Black tab was split and set to 29/47 and White tab split and set to 145/177. A stamped layer (CTRL+ALT+SHIFT+E) was placed on top but a huge color shift occurred. This is because the blend mode of the texture below was set to Color Dodge and this happens – to get rid of this just set the stamped layer blend mode to Color. Decided to try the whole image in Topaz ReStyle and voila, instead of a blue image, I had pinks and warm tones which I really liked. (Here are the ReStyle Settings: colors based on Orange Peel preset – ReStyle Color Style Hue Fifth 0.53; Sat Fifth 0.41; and Lum Primary -0.48; Texture Strength 0.00; Basic Color Temperature -0.31, Tint 0.61, and Saturation 0.11; Tone Black Level -0.31, Midtones -0.02, and White Level 0.02; and Detail Structure 0.38 and Sharpness 0.16.) The last step added my SJ Thin Double Edge Frame on a top stamped layer – sampled colors in the image to get the frame colors.

Sometimes it is just fun to play with the different tools and see what results you get. I think I would get bored if I did the same workflow on every piece I did. Sometimes you have to when working on a special occasion or group of images, but it is kind of nice to take a break and try something different. Until next time – Digital Lady Syd

Digital Lady Syd Related Blogs:
How to Get Blend If Slider Settings to Apply to a Layer

This entry was posted on 07/13/2019 by sydspix. It was filed under Photoshop Filter, Textures and was tagged with Puppet Warp Tool, Topaz Adjust AI, Topaz Detail 3, Topaz ReStyle.