HOW TO GET THAT ABSTRACT FEEL EASILY 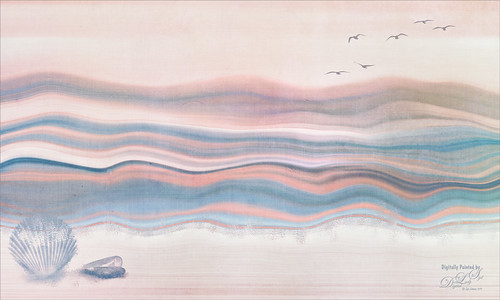 Since it is the hot days of summer, I have just been having some fun creating a few rather abstract images using Photoshop and thought I would share some of my results. One thing I have found is that the Motion Blur filter, whether using Photoshop’s or Topaz’s, is wonderful to add with other filters to get some great abstract looks. For the image above I had watched a good video by Denise Ippolito, a really great wildlife and flower photographer, called The Art of Flower Photography. At the end of her video (at the 50:43 mark) and in her blog of 7/1/19, she shows you how to create some beautiful color abstracts in camera while taking floral and landscape images. That gave me the idea that maybe I could do the same thing using Photoshop.

This Sand Sculpture looking image used a Motion Blur and Liquify Tool along with several stamp brushes. For all the details, check out my Image 1 description at end of blog. 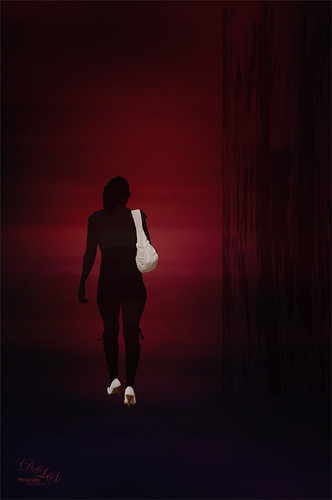 This image was created using an image taken from behind of a person walking on the Queen’s Walk in London. She was selected and a new background created to obtain this rather abstract feel in the image. For post info, check out Image 2 details at end of blog. 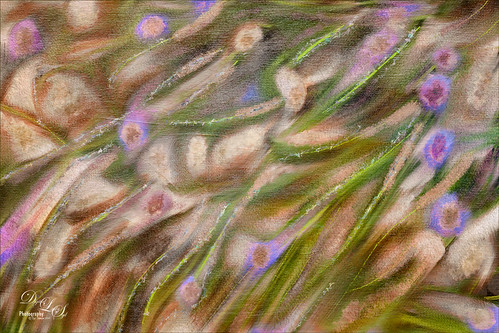 The above image represents a different way to create an abstract – this time a Mixer Blender Brush was used – one provided by Photoshop called the Fan Flat Mixer (located in PS’s Converted Legacy Tool Presets -> Default Tool Presets). The original image was from OnOne’s Springtime Nature Textures packet of small flowers just lying on the ground. The blender was used to stretch out and blend the stalks together, creating a very soft abstract effect easily. See Image 3 for more details.

Well that’s it for this week – I love doing creative things with images. It can turn a rather useless image into something rather spectacular. Have a good week – I will be skipping next week but will return with some new tips and tricks! ……. Digital Lady Syd

Image 1:  The top image is one I created from an image taken at Stirling Castle in Scotland of the surrounding countryside. In Lightroom the colors were kept to a fairly low contrast color palette using just the blue, aqua and gray tones. In Photoshop I changed the color palette to purples and pinks using the Camera Raw Filter which made the image look awful. On a duplicate layer Topaz (see sidebar at my Tidbits Blog for website link) the Motion Blurs filter was applied – just dragged the arrow all the way left to create a straight horizontal line. Then used their HSL filter to get a good set of colors. (A very similar effect can be achieved in PS by going to the Filter -> Blur -> Motion Blur and using an Angle of 0 and a Distance of 2000 pixels.) The turquoise color was added in at this point. To get the wave effect, Liquify was used – just pushed the lines up and down. A clean up layer to even out some of the lines using the Clone Stamp brush was used. Next on a layer on top a bird brush by Wavenwater Brushes n Tools was added and the layer set to 73% opacity. On another layer a Neverhurtno Sealife Scallops brush was added. Next layer was from immrgy in a set of brushes called Anemone-Sheels-Corel/Mussel. Next a layer with just some speckles from Wavenwater’s set was also used. Finally a Color Lookup Adjustment Layer was added using the Abstract Cobalt-Carmine preset. On a New Layer on top a mixer was used to just smooth the edges between the sky and the waves. A Curves Adjustment Layer was added and the Adobe Paper Texture Pro was used to add the Apple Blush texture set to Overlay blend mode at 70% opacity. This was a lot of fun to create and really was not that hard.

Image 2:  This image took a while to create and several different options were tried before the correct feel to the image popped up. Mainly it was post processed in two major steps. First the woman was extracted and placed on her own layer. She was duplicated with a black layer mask where just her purse and shoes were painted back. Then the first layer of the lady was selected (CTRL+click on the thumbnail) and she was filled with black (set colors to black and white and ALT+Backspace). Now just the purse and shoes show up. The second major section was used the Motion Blur Tool on the image and stretching it. Then a second Abstract Texture by Inspiration Hut called Design Background 1 (their sight is not coming up correctly so I could not get a link, but will add it once it is straightened out) was placed on top and set to 78% layer opacity. On a new layer some black vertical brush strokes were added to the side. Last step was to add a vignette – this one used the one described in my recent Using a Levels Adjustment Layer for a Vignette blog. Silhouettes always create interesting subjects.

Image 3: As stated above, the original image was taken from an OnOne give away set in April called Springtime Nature Textures which contained little white and blue blossoms. The layer was duplicated and the Fan Flat Mixer brush (located in PS’s Converted Legacy Tool Presets -> Default Tool Presets) was used to smooth it all together with just long brush strokes – it looked really blurry at this point. Then several other brushes on individual layers were added to get more detail back into the image: Serge Ramelli watercolor brushes (see his How to Create a Watercolor Painting Effect with Photoshop video to download brushes), a whole bunch of Grut’s Brushes to create some new details (these are best brushes around – check him out), and one of my favorite brushes every by Melissa Gallo called a Vine Brush (only available with her PS painting class). French Kiss Artiste Fauve Rainbow texture (see sidebar at my Tidbits Blog for website link) was added on top with a Hue/Sat Adjustment Layer clipped to it and the Saturation set to -100 to remove all the color and leave just the texture. That was it. Lots of fun.

This entry was posted on 07/20/2019 by sydspix. It was filed under Photoshop Filter, Topaz Studio and was tagged with Motion Blur, Topaz Studio.