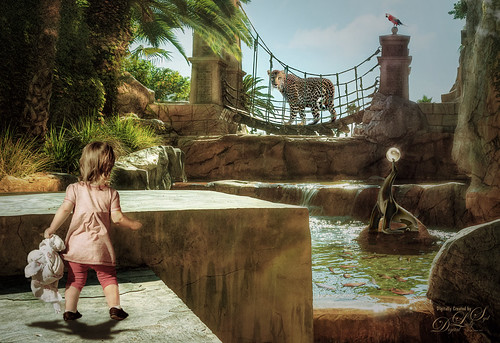 Running behind with blogging this week – this image took a lot longer to complete than I planned. Compositing is a lot of fun to do, but it takes a while to put it all together and get a realistic feel to the image. I love doing this type of image but between coming up with a good idea and finding the components, it takes some time. I had been thinking about what kind of story I could present with this background image which I really liked. I decided I liked the idea of the little girl and the Leopard catching each others eye and sort of a hidden mysterious spot. The image has 5 added components all with different issues that needed to be addressed to get a good final look. The background above was taken at the Mandalay Bay Hotel in Las Vegas (while I was attending a PS World). The Seal Statue and Parrot are from PixelSquid, a great resource for objects but you do have a fee to use them. The little girl and fish were from my own images. The Leopard was from Pixabay. The final image has many many layers – had to use lots of groups to keep it all straight. An older blog from a few years ago is being re-blogged since the info discussed is still very relevant. These really are a lot of fun to do so without further ado, here is the original.
***** 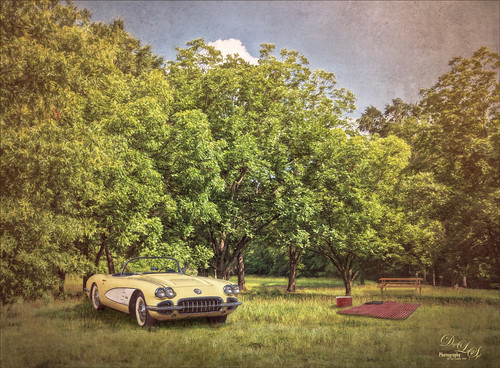 This week I decided to do some compositing just because its fun to do. There are a lot of reasons to do this besides being fun, like it teaches you to really be aware of your light source and shadows to get a realistic looking the image. Also it gives you a chance to use some of the Photoshop tools and techniques that are not used that often. And finally, by choosing each object a good story can be created in the image.

I have always loved this image of a yellow corvette taken quite a while ago and just had not found a good place to use it. So this is where the compositing process began for me on this image. Since I started with the object first, a suitable background needed to be found to start my story. The image used was of some beautiful trees in Madison, Mississippi. If you are into compositing, it is important to take a few photos to use as background images – places where anything could be added to make an interesting image. The yellow in the car and the greenish yellow image seemed to be a good fit. The colors of the objects is important in composite images to help blend the objects together in a natural way.

After adding all the objects, the light and time of day of the background image needed to be considered to once again, blend in the objects naturally. Everything added to the image must fit with the scene. The blanket, cooler and picnic table were all downloaded from PixelSquid, but I could have used my own images of these objects. The following is a basic workflow on how this image was put together and a couple tricks I have learned along the way.

So this is where the PS tools and techniques come in handy. The car was sitting in a field with a bunch of other cars around it and a fence behind it. Just a little color adjustment was done in Lightroom before opening up the car in PS. It was removed from its background using PS CC2017 and the Select and Mask panel – the Quick Selection Tool was first used to select the car, and then the edges were refined using the Refine brush. Also the windshield was removed in this panel. Any selection tool or filter that removes backgrounds could have been used, I am just finding the new Select and Mask panel pretty nice to use. I also noted that the light was not shining on the car in the t direction – another problem to address later.

Now the Tree image was opened up in PS after just some minor adjustments in LR. Several items were removed in the image using the Spot Healing Brush. Next the corvette was placed in the image and positioned – used Free Transform (CTRL+T) to fit it in correctly. I decided the image needed to be expanded on the lower level to make the image look balanced so the car layer was deleted. In CC2017 the Crop Tool was used and Content-Aware was checked to fill in the Options Bar. Note that the Content-Aware option only works with the Crop Tool on a single layer. Therefore, either the image must be merged down at this point or crop the image first before adding your objects. I found I still had to do a little clean up after the additional pixels were added.

The car was again placed in the image – you can either use the Move Tool and drag to the composite image tab, go down to the image, and release; or use the old fashion way which is to select (CTRL+A) and copy (CTRL+C) in the object image, then paste (CTRL+V) in composite image. I use both. The car was Free Transformed (CTRL+T), and a layer mask was added to the car to remove the incorrect shadows in front of the car. Next the picnic table, cooler and blanket were added from PixelSquid (see my How To Use the PixelSquid Add-on in Photoshop blog – it is no longer in beta testing but is a pay to use program.) The shadows for these objects could be manipulated with the downloaded objects.

To get the objects to look like they really belonged together, some of the foreground areas had to slightly overlap parts of the blanket, tires, and table legs. So layer masks were used to add this effect in on each object. A very small brush was used to get this effect – try using different brushes in the mask to get a more natural result. The area seen through the windshield of the car had to be slightly blurred , so the Blur Tool, which I almost never use, was selected and just painted in a bit of softening to the windshield. It worked great!

A stamped layer (CTRL+ALT+SHIFT+E) was placed on top and Topaz (for website see sidebar at my Tidbits Blog) Impression 2 was opened. The Degas I preset was applied at around 40% – that was all that was changed in this preset. The layer was duplicated and Topaz Glow’s Oh Hey preset was applied at 30% – this filter does a great job of applying an overall lightening to an image. On another duplicated layer, Topaz Texture Effects 2 was opened and a downloaded Community preset called Fall Foliage Fall Trees was applied with a little manipulation to the Vignette and Basic Adjustment sections. Each image will use slightly different settings in these sections. The Light Leak had to be flipped horizontally to keep the lighting consistent in the image.

To really soften the edges of the objects, individual New Layers were added to paint in some correction color. For example, on the blanket, a little dark paint was added to give it more of a rumpled feeling on the grass – just used a soft round brush and set the layer opacity to 13%. A little lighter color was added to the right side of the cooler using a dab of light yellow and set to 60% layer opacity. To add a little lighter coloration to the front right area of the car, a little light color was added to just highlight it, and the layer opacity was set to 20%. Even the background was tweaked slightly to blend the image and give that vintage feel. This trick was learned from a wonderful class by Karen Alsop on Creative Live called Using Composite Photography to Create a Fantasy World. Check out Karen’s website for some great compositing images! Some darker shadow effect was needed under the car, so this same technique was used there also – the shadow will be darker right under the car and blended out softly the further away it gets. The layer opacity was then adjusted down a little. This can also be used for the atmospherics in the image – where the further away you look towards the horizon line, especially in landscapes, the more muted the colors become.

The overall image appeared to be too yellow to me so a blue (R156/G161/B220) Color Fill Adjustment Layer was set to Color blend mode and 13% layer opacity to offset this. Blue is opposite Yellow on the Color Wheel so this will serve to curb the yellow color somewhat.

Finally, a little more definition was needed in a couple areas of the image. The area around the headlights was burned. The trees were slightly darkened behind the brighter areas of the light trees to separate the branches a little. To do this, a New Layer was opened, set to Overlay blend mode, and with a soft black brush set to 12% layer opacity, just painted over these areas. (See my The Best Dodging and Burning Technique! blog.) The layer was set to 57% layer opacity.

Now the image is complete! I was pleased that it tells a story, has the vintage feel I was after, and the components all fit together well (using tools and techniques I do not always use) – to me that is what a composite should do when done correctly! It does take a little effort to create a good composite, but it is well worth time if it turns out the way you want it. I know there are lots of ways to create composites, this is a pretty complicated one, but they are fun to do! Hope everyone in the US has a great Thanksgiving Holiday!…..Digital Lady Syd

This entry was posted on 09/23/2019 by sydspix. It was filed under Photoshop and was tagged with Composite, compositing.