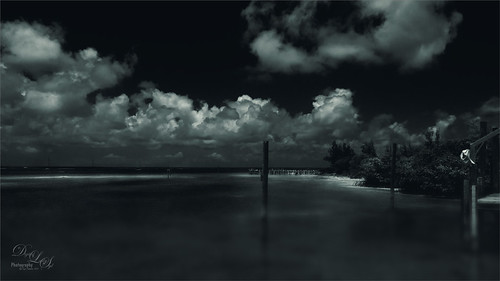 This week I happened upon a really excellent video by Mark Denney called How to Embrace Minimalism for Improved Landscape Photos so I thought I would see if I had a few images that would qualify. It was fun to try a different technique using some of my older shots. Apparently a lot of minimized images are black and white due to color issues. So here are my first attempts at minimizing my images.

Mark says the major areas to be concerned about when doing a minimal landscape are Obvious Subject, Expansive Composition (negative space), Minimizing Color, Light and Shadows, and Keep It Simple. He has lots of great examples in his short video to show how to do this. I believe the image above of Green Turtle Cay, one of my favorite places that is in the Bahamas, fits most of these criteria. (Here is a great short video of how Green Turtle Cay and the little town of New Plymouth looked after Cat 5 Hurricane Dorian came through – amazingly good considering!) The image is very dark, but does have great highlights. There is not much in the image to see, but the little shoreline and small pier in the distance serves as fairly Obvious Subjects. The color palette is very limited and there is quite a bit of negative space in the foreground. What I like is that it creates an image that is very different from my normal way of looking at landscapes. (See Image 1 descriptions below for more details and links on how this image was finished.) 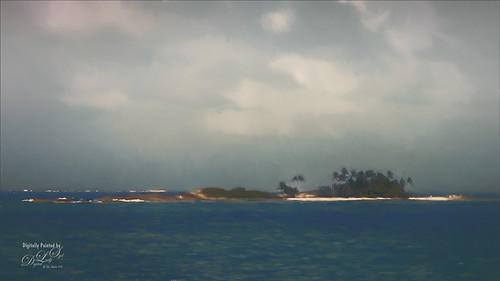 The above image is another one from the Bahamas – a little lonely island near Green Turtle Cay. This area is a great place to get minimalist type images as it is very flat with these gorgeous skies. This image has an obvious subject, lots of negative space, minimal color palette, and some great highlights and shadows. I think it meets the criteria. In this case it does not need a black and white treatment as it does not have a lot of colors that distracts from the subject. (For more info, check out Image 2 below in descriptions.) 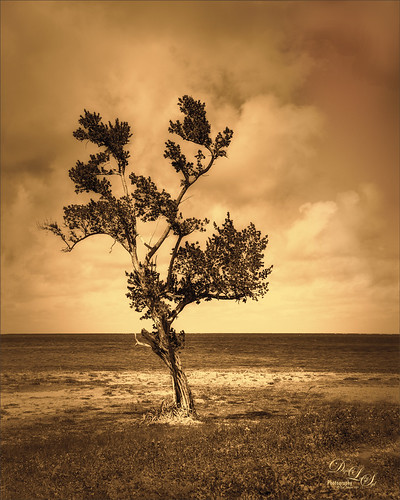 Another example of a simple minimalist landscape. The original image was created from 5 raw files in Lightroom using the Photo Merge command which creates a DNG file. It was then opened in Photoshop. (For more post details, check out Image 3 description below.) The subject definitely is a strong one in this image. Quite a bit of negative space, minimal color and with highlights and shadows. Very desolate looking but I like the image – the beach was very bare looking.

Hope you enjoyed the blog and will try out creating a minimalist landscape. I am going to photograph some local places using this effect and getting some more practice – I think it is really an interesting technique. Hope you have a great week!…..Digital Lady Syd

Image 1:  The original image of Turtle Cay in the Bahamas was a very colorful one with lots of blues and turquoise colors. I decided to turn it into an infrared effect by using a really old preset (still works great) in Lightroom called GA B&W Infrared 01. Then several adjustments were made in both the Basic and B&W Panel to get the correct balance for the effect wanted. The image was taken into Photoshop and a Spotlight Effect layer was added to mainly the beach edges. A Color Lookup Adjustment Layer was added using the Nathan Black Atmosphere preset from the wonderful PS guru Glyn Dewis and set to 32% layer opacity. (I am having trouble tracking down this LUT but it may be in his Creativity Tool Kit downloadable from his website.) The Blur Gallery’s Field Blur was set to 33 px and added on a stamped layer to soften down the whole image – then a layer mask was added and the Gradient Tool was used so only the foreground received the softening effect from the blur. On two new layers above, a fog brush was used ,one with white color and one with black, to further soften the foreground and were set to very low opacities. Another new layer was added on top and the Blur Tool set to 100% Strength and used to paint over the objects on the right to further soften their effect. To get the soft blue tones, another Color Lookup Adjustment Layer was used and set to the PS Horror Blue preset at 20% opacity. That was the last step.

Image 2: Basically nothing was done in Lightroom except some cropping. The image was taken into Photoshop to do the rest of the post work. This image turned out to be mainly a Topaz (for website link, see sidebar at my Tidbits Blog) image. The original layer was duplicated and the top layer was opened into Topaz Studio 2. Topaz Adjust AI filter was then opened and set to Standard at 1.00; Brightness Exposure -0.06, Contrast -0.31, Shadow -0.41 and White -0.09; and Split Tone Highlight Sat 0.49, Highlight Hue 0.15, Shadow Sat 0.37, Shadow Hue 0.65, and Balance 0.33. Next the Impression filter was set to the Default and a mask was created and set to Transparency 0.71. Painted a little paint off the palm trees, then clicked on the Adjust icon – on the Density slider, set the mask to 0.27 so just a bit of the effect was apparent. Went back to the Brush and set it to 0.33 Transparency and painted back a little more definition to the palm trees. Lots of little tweaks here. The Dehaze Filter was set to Strength 0.72, and yet another Impression Filter, this time using Stroke Type 07 with the Texture set to Original – and in the layer mask painted back the island and in Adjust set Contrast to 1.44 and Density 0.36. Set Filter Opacity to 0.65. I am giving you all the settings so you can how much tweaking can be done to get just the look you want with all these filters – kudos to Topaz for this! Next on a stamped layer Topaz ReStyle was added – used the Snow Flight preset with several changes. (ReStyle: 32% opacity, Sat Primary 0.38, Secondary -0.58, Third -0.61 and Fifth 0.34; and Lum Primary -0.14, Secondary -0.56, Third -0.11 and Fifth -0.23; and Basic Color Temperature -0.23, Tint 0.19, and Sat -0.22; Tone Black Level -0.08, Midtones -0.03, and White Level -0.22 and Detail Structure -0.28 and Sharpness -0.05.) After viewing another excellent video called Advanced Color Toning in Photoshop by Blake Rudis, a Gradient Map called Blake Rudis gray gradient 19 set to Soft Light at 62% layer opacity was selected. (Do download his free gradients if you use the Gradient Filter at all!) Next added a group of adjustment layers created from a video (Trick the Photo Filter to Add Drama & Color in Photoshop) by Unmesh Dinda and changed several of the settings to fit this image – then setting the group to 89% layer opacity. On a couple new layers some painting was done to smooth out the colors a little. Added a Color Balance Adjustment Layer to remove just a little bit of Magenta in the sky in the Shadows and Highlights. Next Topaz Lens Effects was opened and the Fog Filter was used with these settings: Fog Adjustments Amount 0.43, Region Size 0.38, Transition 0.21, Angle 180.0, and Diffusion 0.55. That was it.

Image 3: This image was created from 5 raw files in Lightroom. They were combined into an HDR using the Photo Merge -> HDR command which created an HDR .dng image. This was brought into Photoshop and on a duplicate layer, Luminar Flex was opened. This is where the image was converted into a black and white image using the B&W Conversion filter. Also a small amount of Dehaze, Image Radiance, Top & Bottom Lighting, and Whites/Blacks filter were used. A Red Channel Curves Adjustment Layer was opened and an S-curve created. The Color Lookup Adjustment Layer was set to Edgy Amber and 66% layer opacity. A Levels Adjustment Layer vignette was created. A Curves Adjustment Layer was used to lighten up the right top area – black mask added with just the area needed painted back. Most of these techniques are in other blogs of mine.

This entry was posted on 09/28/2019 by sydspix. It was filed under Photoshop Filter and was tagged with Skylum Luminar Flex, Topaz Adjust AI, Topaz Impression, Topaz Lens Effects, Topaz Studio 2, Topz ReStyle.