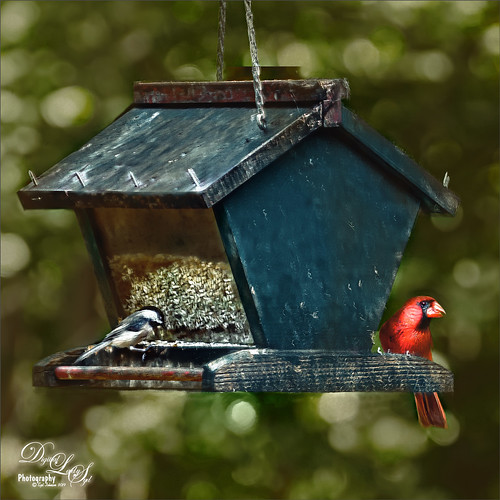 Just doing a really quick blog this week – have been working on an image that was taken this last summer that I really liked, but it just was not that sharp. Mainly my settings were off – they were working on the butterflies but not for the skiddish birds. If I walked in closer, the birds were totally freaking and would not come near the bird feeder, so this was a problem. Lesson learned – shoot manual when having problems! It may not be the best image, but I did get a nice remembrance of the birds and they are at least recognizable. So here is what I finally came up with to fix this.

Obviously I was shooting a lot of images and that was a big part of why this worked. I have learned that a little burst shooting and several attempts are especially good when I am not sure that I am getting the image I want. The two images were not shot at the same time – actually several deer images were taken in between. The juvenile Blue Jay image was shot first and the Cardinal second. You will probably never find a Blue Jay and a Cardinal at this feeder at the same time. That is why the bird images were taken at different times, but I decided to leave the Blue Jay alone as I thought he looked cute. Below are the actual RAW files taken. You can see these both are in pretty bad shape. One reason I wanted to use this Cardinal shot is that I liked the way his head was turned.

In Lightroom these simple settings were applied: first opened the Detail Panel to adjust some Sharpness and add Noise reduction (because it is always there with this camera), then in Lens Correction the check boxes for Remove Chromatic Aberration and Enable Profile Corrections were turned on. The image was next cropped into a Square. In the Basic Panel the Auto button was clicked and Texture and Clarity sliders were adjusted. That was it. The image was taken into Photoshop where it could be seen this just was not good. Topaz (for website see sidebar at my Tidbits Blog) Sharpen AI was added and set to Stabilize, Remove Blur 1.00, and Remove Noise 0.20. It helped, but it could not totally fix this pix. In Lightroom an image that used the same bird feeder that was sharper had to be found – the one with the juvenile Blue Jay was selected. The changes made to the RAW file for the Cardinal were copied over to the Blue Jay image and it was also brought into PS. Below you can see what they both looked like at this point.

Now the Blue Jay image had to have Topaz AI Sharpen applied in PS before stacking on top of the Cardinal layer. Several layers of cloning and painting with both regular and mixer brushes was required to add back the needed detail and blend the colors together. Once brought into the Cardinal image, the Blue Jay layer had to be Free Transformed to fit and a black layer mask added – just painted back parts needed. The info was all there on the originals, just slightly blurry. A Color Lookup Adjustment Layer was added on top using Sparkle Stock’s Bleak-Shoji 01 LUT and set to 58% layer opacity – this tended to tone down the very green background color. Viveza 2 was used to highlight the birds and add a little detail with the Structure slider. The setting were placed on the Blue Jay in this case where the Structure slider was set to 65%, Brightness 42%, Contrast 49%, Saturation 22% and Warmth 25% – really made the bird pop – I use this program all the time to even out an image. I used 6 different points in this image to help direct the eye to the birds. I really feel it is much better than Lightroom’s filters and a lot easier to use. I do still love LR so don’t get me wrong, but this program to me is still the best Photoshop plugin ever made. (See screenshot below of how this plugin was used.) 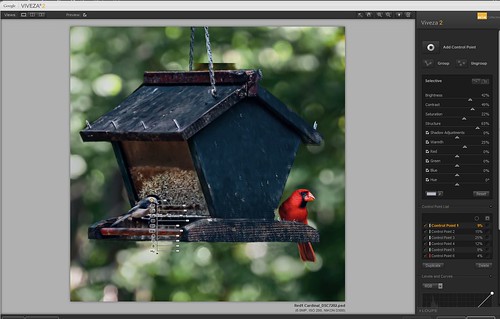 On a stamped layer, Topaz Lens Effect’s Vignette filter set to Burnt Sienna was used – the effect was painted off the birds and feeder in a layer mask. A Curves Adjustment Layer was added to add some contrast back. Then on a New Layer the Sharpen Tool was set to a Strength of 100% to just the Cardinal and some of the seeds in the bird feeder – it was set to 45% layer opacity to keep it natural. A Selective Color Adjustment Layer was added next to adjust the red color in the Cardinal – this really added some depth and detail to the birds body which was not seen in the original image (Reds set to Cyan +82, Magenta +6, Yellow +2, and Black +13). Next a Black and White Adjustment Layer was added on top and the colors were adjusted as a black and white before setting the layer to Luminosity blend mode – great way to make sure you have your tonal values correct. (See my How to Use a Black & White Adjustment Layer to See Contrast in an Image blog.) Last step involved adding a Red Channel Luminosity Mask to a Curves Adjustment Layer – the Red Channel lighted up the birds the best. (See my How to Use a Red Channel to Create a Nice Blended Image Effect blog.) I hope I am getting across the fact that the sharpening is just slowly built up using different tools for different parts of the image. 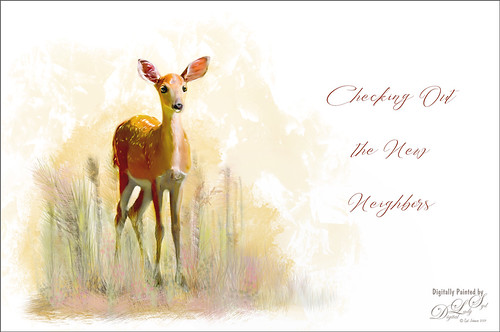 Who is this that just walked into my blog? Oh yes, one of the deer that was wandering around the yard near the bird feeder. My goodness! (Image was digitally painted mainly in Corel Painter 2019 and then finished up in Photoshop – my normal paint process.)

Anyway, thought I would show you how to fix something that may not seem fixable. It can be done, just takes a little experimentation and imagination to make it work. It actually is a lot like compositing images. Hope this was a bit of help to some of you – a favorite image might be saveable with a little manipulation. …..Digital Lady Syd

This entry was posted on 10/13/2019 by sydspix. It was filed under Corel Painter, Lightroom, Photoshop Filter and was tagged with Topaz Lens Effects, Topaz Sharpen AI, Viveza 2.