WHAT ABOUT THE PATTERN STAMP TOOL? NOT SO BAD! 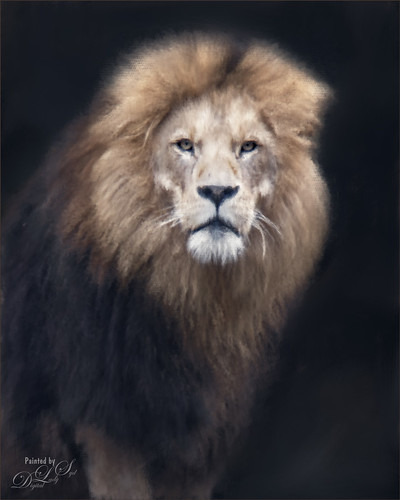 This week I tried out the Pattern Stamp Tool, one I do not remember using. Since I have been getting back into painting some of my images using both Photoshop regular/mixer brushes and Corel Painter, I did not think I would like the results since it is a “painting” tool that has been with the program for a very long time. Well, if used correctly, it does a surprisingly good job. The Lion image above is one I downloaded a long time ago from Unsplash and is by Jakob Puff. This looks a lot harder than it was and I was totally surprised how nice the lion turned out, especially considering how fast it was done.

So what brought this on? This week Adobe Create came out with a link called Free Photoshop Brushes: Impressionist Set by Creators Couture. Needless to say I had to check this out. Jessica Johnson did a short video and gives you five Pattern Stamp brushes to try out this technique. What is so interesting is that you are not carefully painting each section with your brushes, you are basically just dragging around to lay down the strokes. The image itself has been turned into a Pattern which the brushes use as guidelines to follow. They look like strokes because each brush has a different make up. Jessica’s brushes are really nice and they were the only ones used in the lion image. I was going to do a video, but I think Jessica’s is pretty good and short – if you want to try this out, follow her video.

Her technique follows a pretty standard painting workflow with an Underpainting layer, Base layer, Detail layer, and then some additional layers to finish up the image. Each type of layer has a brush associated with it to create the effect. A duplicate copy of the image was placed on top and turned off while painting. A solid brown layer was used to build the painted effect up on – basically follow her simple steps to get a pretty decent result. For the above, once done with the Pattern Stamp layers and brushes, a New Layer was added to paint in the white whiskers a little. A black layer mask was placed on the duplicate copy on top and the areas that needed a little more emphasis and detail were painted back lightly – mainly the eyes, nose and whisker areas and it was set to 43% layer opacity. (See Lion Image info for final steps.)

What I did learn is that it is not that hard to create your own Pattern Stamp brushes. There are a couple tricks you do need to know though.

These steps also work on any brushes you want to change over to a different type, like changing a regular brush to an Eraser, Clone Stamp or even a Mixer. Pretty handy.

I did a lot of research before writing this blog to see if anyone else has a better way of using this Tool or better brushes – I could not find a lot. The great PS Guru Jack Davis had demonstrated this technique in his wonderful Creative Live Class called Painting with Photoshop where he used very different brushes (from 2002 but they still work) and an action, which are provided, but my first results were not good. What I liked about his brushes are that they represent Chalk, Dry Brush, Oil and Watercolor mediums. Need to consider this when creating your own.

How I created a couple of my own brushes was to look at the ones Jessica provided and try out similar settings. It was really trial and error and it totally depends on the look wanted as to which brush to adjust. For more on my brushes I created see below in Lion Palm Tree info. This process can be a little time consuming and Jessica’s brushes work really well IMO. If you only use this process occasionally, her brushes will probably be a good set to use. She also has several for sale on her site if you decide you really like to do this. 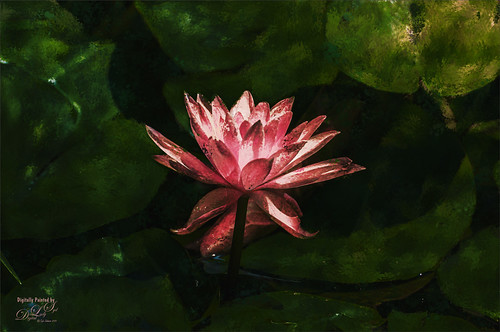 This Lily image was created a little differently. Instead of creating a copy of the Water Lily image to use as a pattern and painting on directly, separate layers were used with different brushes to add different painting stroke and color effects on the image. In this case a green Watercolor Pattern was used for most of the leaves in the background and it was painted in using one brush I created. Then on a New Layer on the dark areas in the image a green Glitter Pattern was placed in the Options Bar, and a different brush was used- it created sort of splotchy strokes. On a New Layer the same brush using a Blue Glitter Pattern was added on some of the leaves for interest. Last pattern stamp layer which gave a pretty cool look to the lily was to set the layer to Hard Light Blend Mode and using a pattern called Strokes Gold and Kyle’s Scrape brush converted to a Pattern Stamp brush – the actual flower was painted over. For the rest of the steps and resources, see Lily info below.
***** 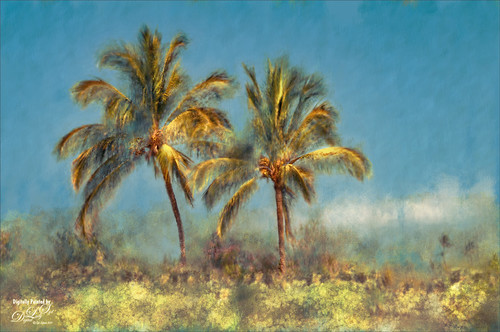 These two painted Palm Trees from the Big Island in Hawaii turned out to be a good example for using the Pattern Stamp Tool. This time I used both a Pattern of the image itself for painting, and created a pattern using a small portion of a Renoir painting that had lots of pretty greens and blues in it. That meant that I switched between both patterns when creating this effect (turning the Align checkbox on and off). Just used a Solid Color Fill Adjustment Layer with a bright blue for the bottom. Then followed Jessica’s workflow using her brushes for the Underpainting, Base, Detail, Artistic, and Textures layers. Used one of my brushes and created patterns to apply the color behind the horizon and in the foreground. The foreground layer was set to Color Dodge blend mode at 57% layer opacity to get the yellows to pop. In my Two Palm Trees notes below, I have given you all the settings I used to create one of my brushes that was used for the foggy effect behind the trees. That was about it on this one other than the stand finishing as in the other two images.

I found this technique pretty easy to do and would encourage you to try a simple image using Jessica’s brushes and see what you think. She also gives you some patterns if you sign up for her newsletters which are very nice. She has a few videos on her website which show how to create the patterns like I did on the Renoir pattern for the Palm Trees image – this is really very simple stuff. If you like the painterly look, give it a try – you can always use layer masks to remove the effect from faces or objects and give a really interesting overall effect for your images. Well have fun painting! ….. Digital Lady Syd

Lily Image: The Green Watercolor pattern was from a set by Ult Designers Watercolors. I tried a lot of Grut brushes (the best around – check out his freebies section for a free brush every week and his sampler for some more good brushes) as he uses a lot of different types of tips , textures, and edges in them. I finally got a pretty good brush using his Grut – OI Chimp Gimble and another with FX IL Choppy Slop brushes in his excellent Inky Leaks Set. Also used PS’s Kyle Webster’s Scrape brush. To get the free patterns, go to Chris Spooner Glitter Patterns. The Brush Strokes (Gold) Pattern is free. To finish up this image, usually I group the Pattern Stamp layers. Then once again just my normal finishing up process. First on a New Layer I did a little flower clean up – one area was too bright and distracted from the focus of the image so it had to be painted using a darker color. Next a free Matt Kloskowski’s Sun Rays Top Left was added, flipped and rotated to have the correct lighting effect, set to Overlay blend mode at 59% layer opacity. I did not like the white light but wanted a warmer color, so clipped a Hue/Saturation Adjustment Layer to the image and set the Hue to -180, Sat 98, and Lightness -27 for more yellow tones in the ray. This added a cool look to the image. Two New Layers were added and set to Overlay blend mode – one for a spotlight effect on the flower, and one to add more orange and yellow tones to just parts of the flower for some contrast. What really popped this image was a Gavin Philips custom pattern with a bright sun ray in the upper left from his Lightmaster Action.  The ray was moved in the pattern by holding the CTRL and dragging in the image. It was set to Overlay blend mode at 39% layer opacity. On a New Layer was set to Overlay, some black paint was added to darken down the upper right leaf – became too bright from the Pattern Fill Adjustment Layer. Next a Color Lookup Adjustment Layer was added using my Sketch Effect cube presets and set to 71% layer opacity. Next a Hue/Saturation Adjustment Layer to just adjust the color a little. A Black and White Adjustment Layer was used to adjust the tones in the image and set to Luminosity blend mode. And Finally a Red Channel Curves Adjustment Layer where both the contrast and the colors were tweaked just a tiny bit.

Two Palm Trees Image: Just a couple things about this image. I created a Pattern Stamp brush using my SJ 3 Pastel brush as a basis. Since I have released my settings for my go-to brush a long time ago, I will give you the settings I used to create the Pattern Stamp brush. First need to follow the instructions in my How to Create My Favorite Brush blog to create my basic SJ 3 Pastel Brush. Then in the Texture section, change Texture to Extra Heavy Canvas, Invert checked, Scale 83%, Brightness -90, Contrast 76, Checked Texture Each Tip, Mode Linear Height, Depth 23% and Depth Jitter 76%. Then add a Dual Brush set to Rocky (a soft round grainy ball), Size 223 px, Spacing 29%, Scatter – check Both Axes and 123%, and Count 5. Now go ahead and Save Brush, then Save again with a Tool checked, select the Pattern Stamp Tool and then save again with Tool checked. The trick to creating a brush is to look at the Texture and the Dual brush sections. These both have a lot to do with how the brush will paint a pattern. A Color Lookup Adjustment Layer using Scott Kelby Warm Reds preset was added at 90% layer opacity. Last steps here were to use two spotlight layers for lightening up and darkening down areas in the trees. Black and White Adjustment Layer and Green Curve Adjustment Layer were used to finish off the image.

This entry was posted on 10/20/2019 by sydspix. It was filed under Photo Art, Photoshop Brushes and was tagged with Pattern Stamp Tool.