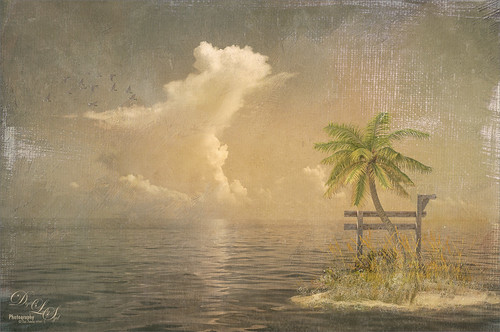 I would imagine everyone who has Photoshop has run across the name Julieanne Kost – she is an Adobe Evangelist and attends most major events that showcase Photoshop. She really loves to use texture and recently created a short video on her blog called Happy Birthday Photoshop! to let you see how she puts here fine art composites together. I found this short video really interesting and thought I would give her style a try and share it with you. The above image was my first attempt.

I have always felt that composites are really fun to do, but it does require a bit of creativity to pull together several different elements into a meaningful result. The above image I named “Hope on the Horizon” as I wanted to depict a rather lonely feeling but with the moving clouds and birds, there is always activity and hope.

Here is how I perceived her workflow – my own steps for the image above is in italics.

This entry was posted on 02/22/2020 by sydspix. It was filed under Photoshop Brushes, Textures and was tagged with Melissa Gallo Painted Textures, Textures.