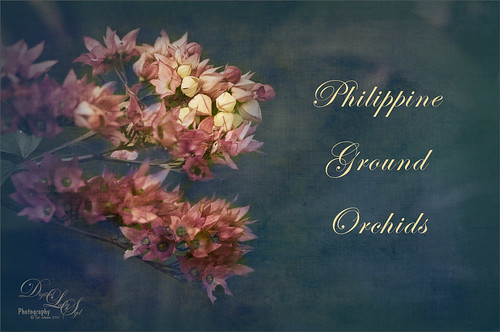 This week I am combining a couple older blog tips written a while back but are still very useful. This technique I frequently use in my everyday post-processing and it is especially useful for directing a viewer’s eye subtlety.

I am using this orchid image as an example of how you can use a Color Fill Adjustment Layer as a subtle spotlight to direct the eye in the image but with a color vignette feel. I processed this image using the free Adobe Texture Pro Panel (it was called Russell Brown’s Paper Texture Panel – check out my blog Russell Brown’s Paper Texture Panel – A Real Winner!). Flypaper’s Apple Blush Texture (included with the panel) was set to Hard Light Blend Mode at 71% Opacity and gave the image a very greenish look but with that great canvas texture.  The Muscatel Texture (also included) was added next and set to Overlay Blend Mode at 29% Opacity to slightly darken the image and add some orange tones. Since I felt like the green was still a little overwhelming, a Solid Color Fill Adjustment Layer was added – a royal blue color was selected and set to 54% Opacity. In the Adjustment Layer’s white Layer Mask, a very soft large brush was set to 15% opacity and with black set as the color, the blue color was gently painted off some of the orchids to give the subtle spotlight effect, from the light green image tones underneath, that will direct the eye. Try setting the Adjustment Layer to different blend modes – I tried Saturation set to a low opacity and it looked great on this image also. This is a cool little trick if you need to draw the eye into a certain part of an image and works very well with flower images. I also like adding my own colors into an image.

This next example came from one of my longer posts called How to Use a Solid Color Adjustment Layer which contains steps on actually applying some beautiful color to an image. One of the sections is called “Use Solid Color Fill Adjustment Layer to Add Some Localized Ambient Light to an Image” and does basically the same thing as the flower example.

I hope this blog gave you something new to try by adding a spotlight or ambient effect to your images. I think I will use the Solid Color Fill Adjustment Layers more – the steps from my older blog (linked above) are still quite useful for adding great color into an image. Have a great week!…..Digital Lady Syd

This entry was posted on 03/07/2020 by sydspix. It was filed under Textures and was tagged with Solid Color Fill Adjustment Layers, spotlight, spotlight effect.