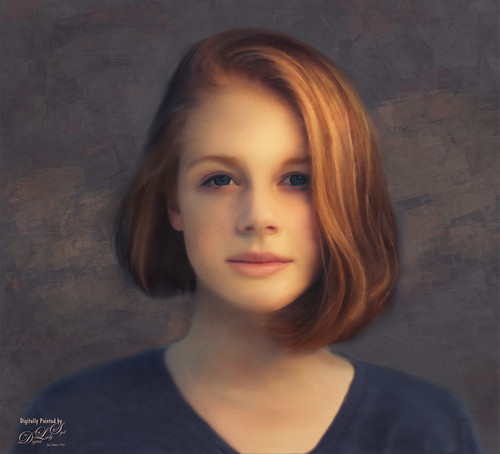 Hi everybody! I know it has been a while since I blogged, but I really have been busy with Photoshop! Major project going through all brushes! So many to choose from and big decisions on which to use. Of course this is a whole other blog on how to sort through this. The portrait image above, by Christopher Campbell at Unsplash, is one that worked nicely with the brushes for the painting effect required in this blog.

Adobe Creative Cloud has Photoshop Daily Creative Challenge videos that are released for Photoshop every few weeks. A couple months ago Sam Peterson, an illustrator and painter, ran two weeks of some really fabulous PS videos. One was called Brushes where he gives you a starter file and walks you through how to create a similar effect as shown above. The image used PS’s Camera Raw, Angled Strokes and Oil Paint filters to begin the painterly process as Sam demonstrates. He also showed how to create a background to match the image to be painted. This photo used a brush called Clay for the background that was in Kyle T. Webster’s India Set he sold for charity (unfortunately no longer available). It is basically a chunky block brush. For a very similar brush, check out the Brix Brush in Kyle’s Summer 2020 brush set or for the brushe, Disastro or Disastro Spatter in his Summer 2021 Brushes, which uses both the foreground and background colors (press harder or lighter to get variations and a cool texture effect). Lots of different brushes were tried before finding a background brush I liked – but then this is half the fun! For info on how to download and load Kyle’s free PS sets, see my Kyle T. Webster’s Photoshop Brushes blog – scroll down to the How To Find His Brushes and Loading the Brushes sections.

Sam gave guidance on what brush settings to use, but it is up to you to find a brush on which to apply these settings. This process is using a Mixer brush to blend, not a Smudge brush which a lot of people call a blender brush. Mixer brushes are a more advanced version of the Smudge. It does not appear Kyle uses Mixer brushes very often for blending as there are only a few in his sets (there are several Mixers in his Megapack Real Oils section will work nicely). For something like digital painting, I would recommend using Mixer Blenders for this exact and complicated blending. The main thing to remember is that the Wet and Load amounts, which Sam sets at 15% to start, can be adjusted “on the fly” to get a more or less painterly effect from the brush. He did not change his Mix and Flow which were both at 50%. Still okay to change if it helps. Also, if a color is needed to be added in, like for a cheek or lips, there are several ways to do this. I find the easiest is to select a regular brush and splash a bit of color in for blending with the Mixer. In another blog I will discuss some of these Mixer points.

One of my favorite Mixer (blender) brushes, and one I used extensively on this image, is by David Belliveau (free download of 4 brushes at the link and also check out his amazing drawing tutorials – link to my blog on David’s technique is listed below). The settings Sam suggested worked fine with this brush (set to 195 pixels). When set to 15 pixels, used David’s settings to do the detail work on the image, like the eyes, lips, and some hair – mainly where the focal point is, after the original blending was done. The larger brush was used to soften down all the other edges other than the eyes and hair by the right eye which were left sharpened as discussed below. As a reminder, once the settings have been added into the Brush Settings panel for the Mixer, save it down as a new brush. Otherwise all the settings will be lost if you go to a different brush and want to come back to this Mixer.

Once a brush is chosen, it was time to paint with the Mixer – Sam seemed to only paint on one layer, but I found it much better to split it up for the different areas being painted. For the right image below, here is a list of some of the layers created – started with a basic once over on the face smoothing the edges like in Sam’s tutorial, then evening out the lighting effect on the next layer, added color to her cheeks, eyelash layer, pupils layer, iris layer, catchlight layer, fixed the shirt on another layer – just duplicated part of it and blended it together, some hair strands added on another, and lips painted. As you can see, it is a bit labor intensive, but the results are worth it. By putting everything on separate layers, corrections can be made really easily. Below on the left is the original image and on the right is the one that looks like a pretty decent retouch – so what makes it look more painterly?

Getting the Final Painterly Look

Mainly adding a texture is a key to getting the more painterly effect needed to sell the look. Sam has a texture in the PSD file he provides and several other brushing suggestions are given to get this look. Also using Color Lookup Adjustment Layers, and possibly Gradient Map Adjustment Layers, using different blend modes and opacities gives some nice painterly effects. And do not be afraid to stack several of the same kind of adjustments using different blend modes and opacities. Just remember that usually a Curves or Levels Adjustment Layer must be added on top to bring back some contrast. So this is what was done on this image to finish up the “look:”

Hopefully you can get an idea what really goes into these digital paintings. And I am still not sure it is really a “Painting” since the original image was used, but it definitely looks more painterly than just a good retouching effect. I still look at it and see places where it could be improved, but it is a learning process. Definitely it took me several hours just to figure out the Mixer blending to get the effects needed. Enjoyed being back and plan on doing this a lot more. ……Digital Lady Syd

How to Create a Texture Brush to Match a Texture

This entry was posted on 07/10/2021 by sydspix. It was filed under Photo Art, Photoshop, Photoshop Brushes, Photoshop Filter and was tagged with Digital Art, Digital Painting.