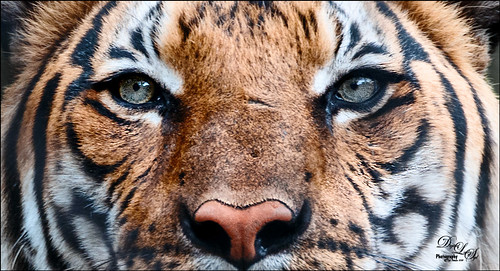 My blog last week was a really technical one so this week I am going to talk about how to make eyes pop in an image. I have been so confused by the various techniques I see. Therefore I decided to try out a bunch of them – in fact I tried out 17 different methods, and I am sure there are many more out there. Some were older techniques and some newer, some are for images with good looking eyes to start with and some have no details and need more work. But overall there are many, many choices. This blog directs you to just a few of these techniques I considered to be the best. Since I am not a portrait retoucher, these are just the ones I would use on my personal work. The tiger above used the Exposure Adjustment Layer described below with a Sharpen Tool layer.

The main image I used for trying all these different techniques is one by Morgan McDonald at Unsplash called Portrait of a Young Lady – I just love this image, but the eyes are totally dark without obvious details so I thought it would make a good image to use. I am really not sure what color her original eye color is so different colors were used in the examples. The other image is a portrait of a family member who has beautiful brown eyes. I am finding most people have brown eyes which seem to be harder to enhance. Also, I tend to put all the eye layers in a group so they can be turned off and on and reduced in strength easier. So here we go: 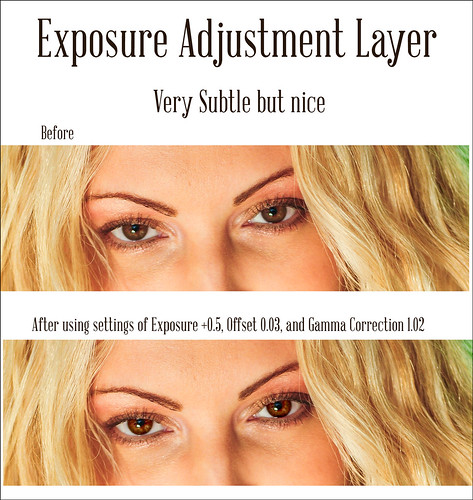 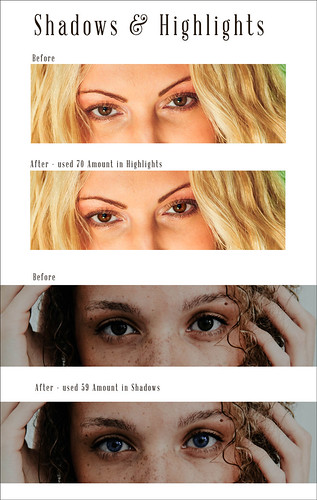 The Best Techniques for Eyes with No Details

These are for the not bright and clean eye images. The second technique looked very good on the blonde image also, but helped the dark eye image much more, so I placed it here. 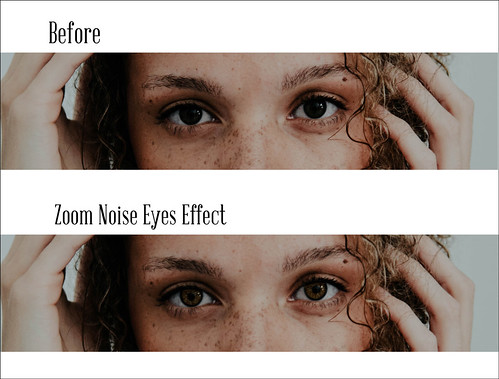 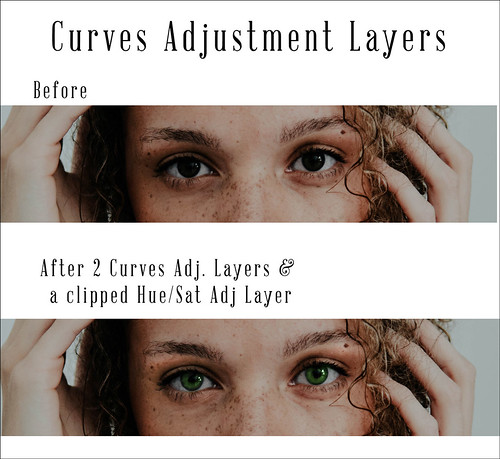 Just remember that you can do several things with these different techniques. Try applying two different methods if needed. Put a New Blank Layer on top of the eyes and use the Sharpen Tool to get an even better look sometimes. Try adding a different Adjustment Layer on top of a single layer group and see what it does. Use the Blend If sliders in the layer styles.

My bottom line – I will continue to use the Exposure Adjustment Layer as it really ranks right up there as the best around. Definitely will use David Nightingale’s technique on black and white images and sometimes on regular ones if the image needs a little lightening lift around the eyes. For dark eyes with little detail, definitely try the Zoom Noise Eyes Effect first. I know there are several techniques I have missed but this seems to be a pretty large batch. I hope this will help you next time you get stuck with the eyes in an image. Maybe one of the techniques will work when another does not.

Try putting some of these techniques to use on one of your images and see which one you like best. I was pretty surprised that the one I had been using all along was the best for me. Have a great week!…..Digital Lady Syd

HOW TO DO A QUICK EYE SHARPENING IN PHOTOSHOP 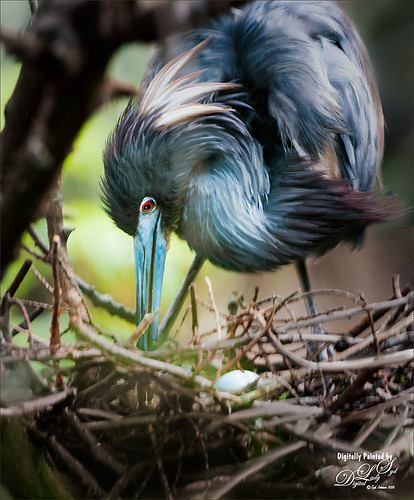 Thought I would just do a quick post while taking some blogging time off. Don’t forget to check in on my short Tidbits Blog though. This beautiful Heron was very busy organizing her nest at the St. Augustine Alligator Farm Rookery.This is another image I painted in Photoshop using a couple Blender Mixer Brushes, meaning no color was added – just blending and smoothing the color that was already there.

This Calvin Hollywood eye technique is one I use all the time. The bird’s eye was sharpened by selecting the eye in Quick Mode (press Q – be sure Color Indicated is set to Selected Areas and press Q again to exit Quick Mode) although any selection tool works fine, and then opening up the Exposure Adjustment Layer. Now just the eye is showing as white in a black layer – if this is backwards, just CTRL+I in mask to invert. Set the Exposure to the right a little (which lightens the exposure of the eye) and then adjust the Offset (sliding to left darkens shadow areas) and sometimes the Gamma Correction (affects the midtones of area) – watch for any milky or color shifts with the Offset slider which means you have gone too far. Go back to the Exposure slider for final adjustment. For example, my settings were Exposure +2.06, Offset -0.0100, and Gamma Correction +1.04, which means the eye was brightened by 2 exposure stops and midtones evened out a little. To further enhance the brightness of the eye, add a Hue/Saturation Adjustment Layer. Copy the Layer Mask from the Exposure Adjustment Layer by ALT+clicking on mask and dragging up – it will ask if you want to replace the mask – say yes. Adjust the Saturation slider and change the whole Hue/Sat Adjustment Layer to Luminosity blend mode so only brightness is changed in the eye.

Very little else was done to this image. Used a Curves Adjustment Layers to make a slight Vignette around the bird and to adjust the blue color in the image, and a Levels Adjustment Layer to open up the midtones a little. This is too much fun!…..Digital Lady Syd