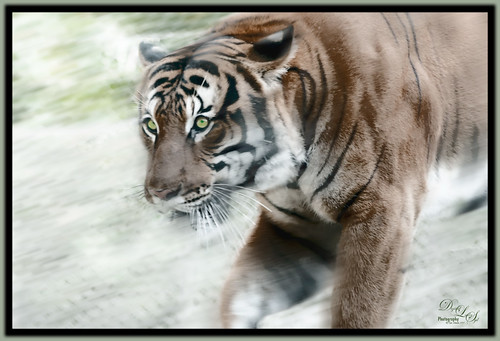 This week just showing a techniques learned from watching Lisa Carney’s classes at Creative Live (she has some of the best classes at Creative Alive). She is a movie retoucher and always has some interesting techniques to pass on. In the past I have often used a Red Channel Luminosity Curves Adjustment Layer in my images to really add that final pop to them (see my How to Use a Red Channel to Create a Nice Blended Image Effect blog), but this technique adds an adjusted luminosity selection to the whole layer instead of just a layer mask (which can still be done with this technique). This technique does not work on every image, but give it a try when having a problem getting a unique look. The Sumatran Tiger image above was taken at the Jacksonville Zoo. I have noticed that this technique can be used quite effectively to get rid of a busy background, as in the case above where a chain link fence was around the tiger. No selection of the tiger needed to be done, just some layer masking to pull him out of the background a little.

For this image just some Lightroom basic adjustments were used before coming into Photoshop. Topaz (see sidebar at my Tidbits Blog for website link) Studio Details was used (this can be done with Topaz Labs Detail also) and mainly the Highlight small detail slider was used to super sharpen the whiskers – then in PS, a black layer mask was created and only the whiskers were painted back. Since I wanted a lighter effect on the image, so this is when I decided to try out Lisa’s luminosity trick that she calls a Channel Pull. This is a pretty nifty effect and she has used it in several of her classes. The Blue Channel was chosen since I wanted to lighten the face and the following steps were performed.

The Blue Channel layer was set to Screen blend mode and was duplicated at 61% layer opacity to further lighten the image. To finish off this image, some eye sharpening was done with Curves Adjustment layers and a Selective Color Adjustment Layer. A Composite Layer (CTRL+ALT+SHIFT+E) was taken into Topaz Lens Effects and a Motion Blur was applied – in PS a layer mask was added and the tiger was painted back. A border layer style was added. 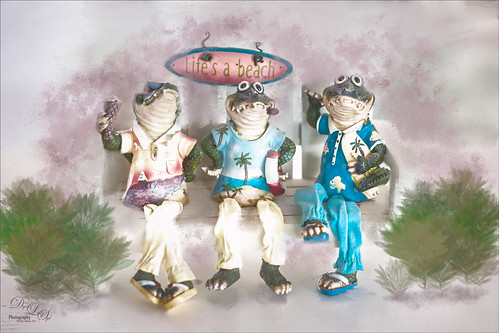 These guys are some figurines photographed on my kitchen table. The original image was with my 50 mm lens at F/2.4. In Lightroom the raw file was adjusted using just the Basic Panel and that was about it. Then I used Lucis Pro 6.0.9 (this filter is still not available anywhere as far as I can tell) to get a little more sharpening to the image – I would have probably used Topaz Studio Detail to do this if I did not have this plug-in. It is always easy to over-sharpen and then add a black layer mask and paint back where you want the crispness to be which is what was done. A composite layer (CTRL+ALT+SHIFT+E) was added on top.

Went into the Channels Panel and the Red Channel had the most contrast which is what I was looking for – the Red Channel was duplicated and a Levels Adjustment was applied. The new channel was selected (CTRL+click on the channel) and the Levels Panel was opened up where a New Layer was added with the selection active. The layer was filled with white which made their faces and background much lighter and a very vintage feel was created.

Then the background was blended out with just a smooth blender brush (there are several in PS now) and the last step involved using a PS provided brush called Kyle’s Spatter Brushes-Beautiful Mess added around the alligators in a pink sand color. A mask was added to paint the spatter off the subjects. A brush was created using a bush element and adding some Color Dynamics to just to add a little more color. Last step was to add an Isabelle Lafrance Diaphanous Overlay Cobwebby (this are the best light overlays I have found) set to 35% opacity to soften image and a Levels Adjustment Layer to bring back a little overall contrast. 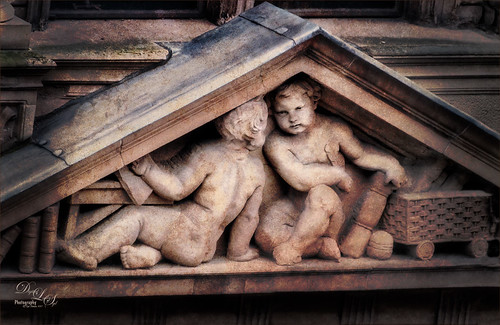 This  above image is of some carved figures located high up on Jenners Department Store in Edinburgh, Scotland, and across the street from my room window. To begin the editing process, used Lightroom to make the original RAW adjustments and tried out the newly updated Auto button in the Basic Panel which did a decent job for a starting point. Just did a little sharpening and noise reduction here and adjusted the Temp and Tint sliders. In Photoshop cropped and cleaned up the image a little with the spot healing brush. Then took a Composite image (CTRL+ALT+SHIFT+E) into Skylum’s Aurora where the Waterway preset was applied. I tweaked the Image Radiance and added a Vignette mainly before returning to PS. Next the Channel Pull was created using the Blue Channel to lighten up the figures, and the selection was also added into the layer mask as the highlights were just too bright and this lowered the effect just a little. A light cream Solid Color Adjustment Layer was clipped (ALT+Click between the layers) to the Luminosity layer and the layer mask was also copied into the Adjustment Layer mask by ALT+dragging the original mask over the Adjustment Layer’s mask and replacing it. An Ash Texture I bought a long time ago was added and set to Linear Burn and 56% layer opacity to give the old antique feel the image.

I am by no means an expert using Luminosity masks that seem to be all the rage right now, but I am finding this technique is very creative and am still working with the whole workflow. It sounds a lot harder than it is and if you are looking for a little different effect in an image, give it a try. There seems to be a lot that can be done with this technique and I hope to show more results as I learn how to use it better. Hope everyone is having a wonderful time getting ready for the holidays! Have a great week!…..Digital Lady Syd