GET INSPIRED USING YOUR FAVORITE TEXTURES 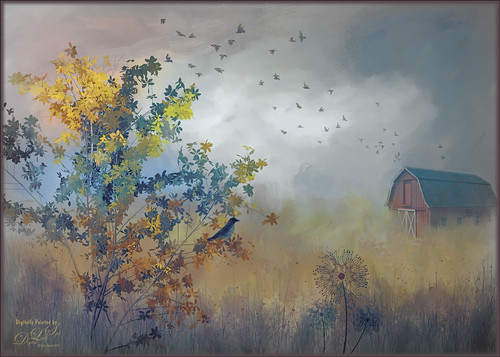 That is exactly what was done above – here is the workflow for this image to demonstrate the steps. The texture was added and left as it is. Next Photoshop’s tree filter was used to create this pretty foreground tree. If you have not experimented with this filter, give it a try. (For more on this see my How to Create a Photoshop Artistic Tree.) It is so much fun! These are my tree settings – most of the settings were changed to get the tree effect shown above.  (Base Tree Type: 19: Fraxinus Griffithi which is an Evergreen Ash, Light Direction 85, Leaves Amount 22, Leaves Size 130, Branches Height 94, Branches Thickness 77, Uncheck Default Leaves and select 8: Leaves 8, Uncheck Randomize Shapes Arrangement 21.3.) A layer mask can always be added if you do not quite like the way the branches look – in this case some of the leaves were too dark so a 30% brush was painted over them in the mask to lighten them up. The Liquify Tool can also be used to get the branches sitting just right. A Hue Saturation Adjustment Layer was clipped to the tree to make it more golden in color to match the texture. The texture looked like a golden wheat field to me so a little red barn from PixelSquid was added – a mask was added so the bottom of the barn could be removed and hide it from view. The layer was set to 55% layer opacity so it is looks a little less sharp and more distance. I love the brushes by DeviantArt’s ninelvlsup and her Dandelion Whisps brush was used in the foreground. Some of the edges were removed with a layer mask. The birds are from a Flypaper Bird Set that I use all the time. To soften the effect of the birds, a Pattern Fill Adjustment Layer was clipped (ALT+click between the layers to clip) to the birds and a yellow and red pattern was used. The bird layer was set to Multiply blend mode at 77% layer opacity. The last element is the single bird from the same brush set called Big Crow Fly Birds brush – it was duplicated and the top layer was set to Multiply blend mode at 65% layer opacity to emphasize the bird a little more. The elements are now in place. A stamped layer was created (CTRL+ALT+SHIFT+E) and Topaz (for website link, see sidebar at my Tidbits Blog) ReStyle was opened. There a different color palette was applied – one that was less bright and yellow and created a cooler color tone – the preset was created from another image. (See my Flagler Beach Pier image for color palette used.) This layer was set to Color blend mode. The final steps are what I generally do when finishing up a regular photo image. Not all my steps were used here but a lot of them. A Levels Adjustment Layer was added to add some contrast back. On another stamped layer Nik Viveza 2 was used to shift the focus back over to the bird from the barn. On a New Layer a little spatter brush was used to give the grass a little life – I wanted it to look like little bugs flying around. A soft orange Light Leak was added to the top left for a bit of color in the sky. A Red Channel Luminosity Curves Adjustment Layer was added to pull the whole image together. The last step was to add a layer style to the edge for a soft brown border – just an Inner Shadow set to Normal blend mode, brown color, Distance 0, Choke 53, and Size 29; and Inner Glow set to Saturation blend mode, Opacity 100%, white color, Softer Technique, Edge, Choke 0, and Size 250 pixels. Know this got a little long, but it is a pretty good example of how to pull a composite effect together once the texture is chosen. 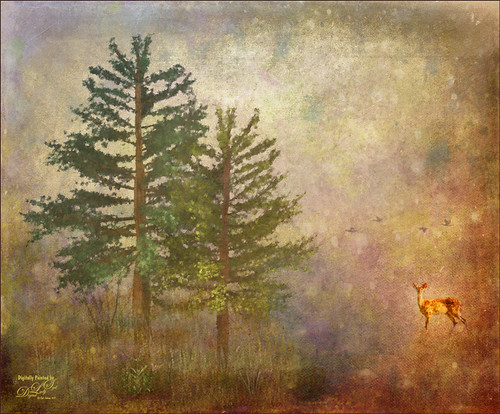 This image used a really colorful background texture that I created using a whole bunch of the brushes in Grut’s Inky Leaks Splatter Brushes, which are fabulous brushes. Here is a link to how this texture was used before. It gives a subtle effect especially in the sky in the above. Here is a quick run-through of the steps using a very similar workflow. The tree was created using the PS Tree filter  again (the Pine Tree 2 was used) and duplicating and flipping it to make a second one. The deer element is from Tara Lesher (could not get weblink to work). Frostbo Grass Set 2 brushes were used. The flower under the large tree is actually from a recent Checking Out the Buds Tidbits Blog. I try to save out anything that could be used again for other images. The flying ducks are also from the Flypaper Bird set above. A light leak was added on right side. A Van Gogh preset was applied in Topaz Impression 2 – a layer mask was used to paint back the deer, birds and tree trunks. Three more textures were used get even more of a painterly look: one of mine which had yellow and a slight bluish vignette around it and set to Darken blend mode at 57% layer opacity (used Topaz Texture Effects in PS to create it), 2 Lil’ Owls (for website link, see sidebar on my Tidbits Blog). The Grey Collection 3 was set to Overlay blend mode, and her Ancient 1 set texture 2 was set to Linear Light at 28% layer opacity. Nik Viveza 2 was applied to adjust focus. Last step added a Color Lookup Adjustment Layer using a Candlelight preset – it was set to Linear Burn at 10% layer opacity. Pretty much the same as above but very different result.

In the image below I wanted to show how a different texture gives a very different result. It contains the same basic elements except that the grass was created using  Aaron Blaise‘s Foliage brush set and Directional Fur and Hair brush set. I was really surprised what nice flowers and grass can be created with these brushes. The texture is another one I painted in Corel Painter. The font is called Winter Holidays. I am not sure I have ever used this texture before but I like it. The reason this image looks so different is that the PS Lighting Effects filter was used to set the lighting on the right side. Otherwise the image was post-processed as the first one. 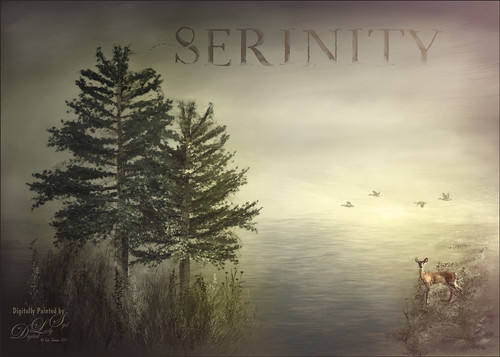