HOW TO PAINT WITH A TEXTURE BRUSH FROM YOUR IMAGE 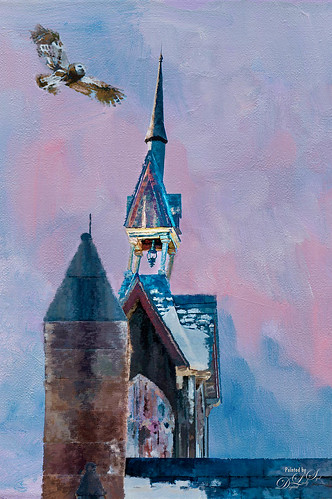 This week I only have this one example using an image taken at Harry Potter Land in Universal Studios Orlando, but it works well for this very useful technique. Since I have been learning more about the brush engine in Photoshop, I discovered a rather useful way to link a part of the texture of the background to the brush being used to paint over the image.

Here are the beginning steps to making this image. First converted image to 8-bit (Image ->Mode->8-bit) so the brushes will paint faster. The sky was a very bland flat blue color so it just seemed to be begging for something to perk it up. Topaz (see sidebar at my Tidbits blog for website link) Detail 3 was applied for an overall image sharpening and then some basic spot cleaning was done since my camera sensor was a little dirty.

Owl Steps: Next an owl brush from a set called harry_potter_brushes_by_nyvelvet-d4qcowz was applied on a New Layer by clicking just once at 100% brush opacity to get a nice owl outline. On another New Layer underneath, some brown was painted in the owl wings and head, then on another New Layer white was painted in other parts of the owl to make it stand out and look painted – just used a regular soft brush at 100% opacity. These three layers were grouped (highlight the layers and press CTRL+G) and named Owl.

A stamped layer was created (CTRL+ALT+SHIFT+E) on top and this layer was opened up in Topaz Simplify where the BuzzSim III preset was applied to use as an underpainting. This broke up the image into a really nice color palette that can be used to sample colors for painting over the main objects. Note you do not have to use Simplify (or Detail above), these are just some ways I am experimenting. An underpainting could be created using different Photoshop filters or adjustments layers. I plan on covering this topic at a later date. Used Topaz ReMask to remove the sky and the selection was loaded as a layer mask from the plug-in (check ReMask settings at bottom to set this up) although Photoshop could easily have used for this as it was a very easy selection. Now a texture needed to  be added underneath to fill up the sky and various ones were tried. I settled on French Kiss Atelier Georgia texture (see sidebar at my Tidbits blog for website link) which gave the image a nice painterly feel. Obviously the Simplify BuzzSim edges in the towers looked bad, but it is now time to make a brush to smooth these out.

Creating Brush Steps: A brush was made right in this image by turning off all the layers except the texture layer. Next use the Rectangular (or Elliptical) Marque Tool and select a small portion of the texture that represents an area that might make a nice brush. Press CTRL+J and it copies the brush selection up onto its own layer. Turn off the full texture layer and on top of the sample layer, add a Threshold Adjustment Layer to get a strong nice black and white look – all brushes have to be in black and white tones or it will not pick up the texture. I think my Threshold Level was set to 162. Highlight the brush layer under the adjustment layer and go to Edit -> Define Brush Preset. Down at the bottom of your Brush Presets Panel is your new brush. The new Brush now needs to be turned into a pattern, so on a New Layer a one stroke click was done with the new 208 pixel brush at 100% opacity in a black color. With the Marque Tool again just the brush stroke was selected and then go to Edit -> Define Pattern and name it the same as your brush. Deselect and highlight all three layers to put into another group and name brush and pattern.

Now the rest of the Brush in the Brush Panel must be set up. The Brush Tip Shape size was set 30 pixels and Spacing 56% – keep the Size small but play around with the Spacing watching the Preview area. Next in Shape Dynamics the Control was set to Off and the Angle Jitter to 4% – just enough to give a bit of variation. The last step involved adding the new brush pattern that was just created. By clicking on the down arrow next to the current texture, the last entry should be the new brush pattern just created – select it. Set the Scale to 131% – needs to be set over 100% so no obvious patterning is observed. If you are using the CC or CC 2014 versions of Photoshop, adjust the Brightness and Contrast sliders – I used Brightness -19 and Contrast 11. Make sure the Texture Each Tip is checked and change Mode to Multiply. Depth was set to 100% and Depth Jitter to 59%. All these settings can be manipulated until you get a stroke you like, but these are settings I used on this image. A new Brush Preset was created with these new settings by clicking on the Create New Brush icon at the bottom of the panel. A video going over these brush and pattern steps is below in case you got lost in the description.

Finalizing the Image: Several New Layers were painted using just this Regular Brush to paint over the objects – no mixer involved – and by sampling in the different colors that Simplify supplied, the image could be painted fairly quickly. Basically I like to sample a darker similar color and paint over a light one and vice versa to get a nice blend effect. Since the texture adds enough empty space in the stroke the colors blend nicely and it also looks somewhat  like the added large sky texture. This does not have to be painted perfectly and it will give a totally painted look. It really was a lot of fun and did not take too long to complete. A Pattern Adjustment Layer with the new pattern set to 100% Scale was put on top. The layer opacity was set to Normal at just 3% layer opacity – just gave a little bit more of the overall texture. On a stamped layer, a Radial Filter was added in Camera Raw to help draw the focus to the top cupola.

Update: I just added a Tidbits Blogs called A Little More Painting with a Texture Brush where I finished up the image started in the video and got a very different result. Check it out for a couple more tips.

Hope you get a chance to try this – as you can see from the video, a different texture gives a very different brush – some are better and some are worse, but it is nice to be able to match the added texture to the paint brush strokes so the objects fit more smoothly into the texture. Have a good week!…..Digital Lady Syd

This entry was posted on 08/02/2014 by sydspix. It was filed under Photoshop Brushes, Textures and was tagged with Photoshop brushes, Topaz Detail 3, Topaz ReMask, Topaz Simplify 4.