GET RID OF THAT COLOR! 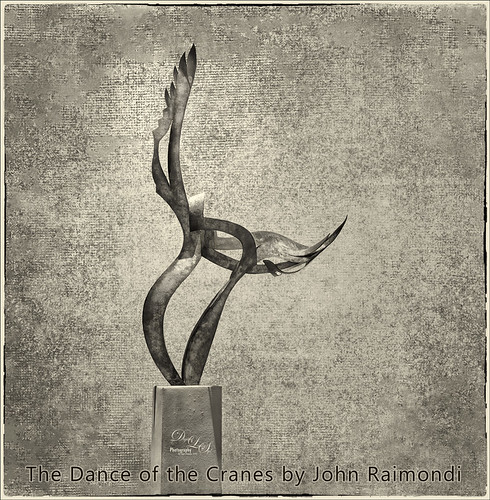 Just getting back into the swing of Photoshop. Decided to try and get a fine art feel from my images taken at the Philip Hulitar Sculpture Garden – a monotone feel was needed since the greenery around the sculpture was overwhelming the beauty of the actual sculptures.

For the above image, first on a duplicate layer the Refine and Place panel was used to select the sculpture and remove it from the background. It was added as a layer mask to the layer. Then two texture were stacked underneath the texture.

Texture:  The first one was one of my textures and was actually made in Photoshop using Just Jaimee 2012 Summer Brush Sampler Freebie – painted with her Texture Brush using a light gold color, on New Layer another Texture Brush layer used a light grayish blue around the sides a little, and on a third layer the Misty Brush created an upper right lighter goldish area. Then on another New Layer, blended around the edges with a mixer. Once saved as a JPG, it was brought into the image set to Normal blend mode at 100% layer opacity. Very simple to create.   The second texture was by Kim Klassen called Pinit 11, which was a white and slightly gray cement texture – very easy to do photograph a similar texture yourself. It was set to Pin Light blend mode at 55% layer opacity.

Google (Nik) Silver Efex Pro 2:  On a stamped layer (CTRL+ALT+SHIFT+E) on top, applied the now free Silver Efex Pro 2 to the image using the High Structure (harsh) preset which really emphasized the texture in the background.  Global Adjustment Structure section was changed to 33% and the Midtones to 27%. The only other change from the original preset was to change to Toning to No. 13, which give the beautiful color in the image.

Did a little Dodging and Burning using Curves Adjustment Layers to emphasize the sculpture properly. (See my How To Use Curves Adjustment Layers to Dodge and Burn and Image blog.) Last step involved creating a Red Channel Luminosity Curves Adjustment Layer to just blend the whole image together by pulling slightly down. (See my How To Use a Red Channel to Create a Nice Blended Image Effect blog.) Used Photoshop’s Lighting Effect Filter with a Spot light to slightly lighten up behind the sculpture – set to 63% layer opacity. The font is called Gadugi from Microsoft. That is all that was done other than cleaning a few areas that did not blend correctly including the sculpture stand. I really enjoyed working on this image! 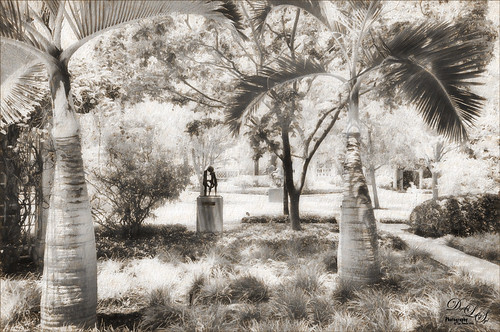 The palm trees above reminded me of nature’s sculptures versus the beautiful Gardens sculptures. I wanted a dreamy effect and it turned out to look a little like an infrared shot. The sculpture is called Forgotten World III by Norman Sunshine. Lucis Pro 6.0.9 (no long available) was used to sharpen up the image first. Silver Efex Pro2 was used again but this time the Fine Art High Key preset was applied without the frame and some contrast adjustments to start getting that dreamy feel – played with the Soft Contrast to get that feel. On a stamped layer Topaz (for website, see my Tidbits Blog sidebar) Lens Effects and applied the Moderate Diffusion filter as is. Topaz Impression 2’s Cave Dweller I was applied as is on another stamped layer. Used On1 Effects 10’s (for website, see my Tidbits Blog sidebar) Strong Vignette as is and set it to 62% layer opacity in PS. Did a little dodging and burning around the palm trees to differentiate them from the background. (See my The Best Dodging and Burning Technique! blog.) Some clean up was done and that was it!

If you have an image that is just overwhelming your subject, try going to a monochromatic effect to help isolate your subject better. It works really well with the green and yellow images. Hope you have a wonderful week!…..Digital Lady Syd

This entry was posted on 10/15/2016 by sydspix. It was filed under Photoshop Filter and was tagged with Lucis Pro 6.0.9, NIK Silver EFex Pro 2, Topaz Impression 2, Topaz Lens Effects.