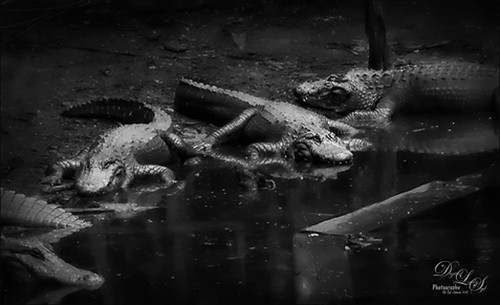 Wow – I feel like I am jumping on the bandwagon, but I had to see for myself if the popular technique using Curves Adjustment Layers for dodging and burning is really that useful. The basic concept is to adjust at least two Curves Adjustment Layers, one to over-brighten the image and one for darkening the image. By doing localized painting on the layer masks filled to black, the effect can be painted in (dodged or burned depending on which Curves mask you are using) to add contrast exactly where needed.

These guys above were photographed at the St. Augustine Alligator Farm recently. They are hanging out waiting for an egg or baby bird to fall out of a nest from roosting birds above. It was a little creepy actually seeing them all hanging around! Anyway, this image is an example of using this dodging and burning technique, and the various workflow steps are shown. Below is an example of what the image looked like as a RAW file and after Lightroom changes were applied. 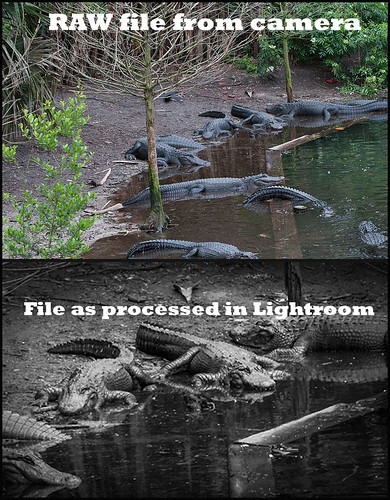 In Lightroom the image was turned into a black and white (set all the HSL Saturation sliders to 0, then adjusted Luminance sliders to get a nice B&W effect – tip from Jack Davis – one of my favorite Photoshop gurus) since the color did not add much interest to the image. Also a rather large crop was done to bring the focus to this specific grouping of alligators. In Photoshop Topaz (see sidebar at my Tidbits Blog for website link) Detail 3 was opened and my Soft Leaves preset was applied. (Settings included–Detail: Small Details -0.51, Small Details Boost -0.40, Medium Details -0.39, Medium Details Boost -0.30, Large Details -0.51, and Large Details Boost -0.42; and Tone: Exposure -0.40, Cyan-Red 0.58, Magenta-Green -0.29, and Yellow-Blue 0.31.) Below is how the image looked after the filter was applied. 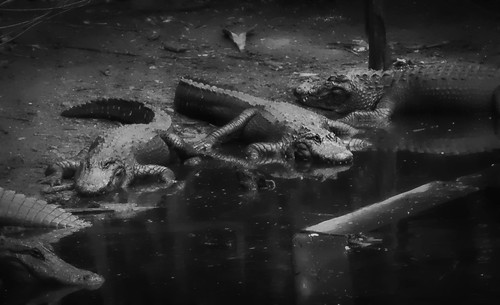 There is now a bit of a soft magical effect – really smoothed out the water especially. A white Layer Mask was added and just detail on the alligator faces were painted back. There still is not much contrast between the background and animal bodies. So the next steps were: 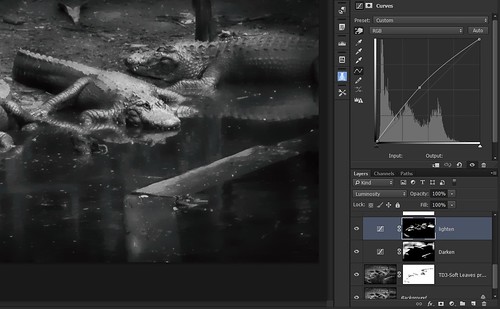 This turned out be quite an effective way of getting the correct brightness on the actual bodies of the alligators, and to create a nice vignette around the background of the image. The areas around the bodies of the alligators were slightly darkened just to add a little separation to make them stand out a little better. And remember that you can always go back in and change the curve(s) if the effect is too much or not enough. Also the layer mask can be adjusted in the Properties Bar with the Density and Feather sliders if more softening is needed. Last steps included a clean up layer to get rid of a few miscellaneous distracting objects, and a little selective sharpening on the faces. Now when I look at the final image I believe I am seeing in the faces and bodies of the alligators a bit of the fear they produce when you actually see one. I find them to be rather ferocious and extremely cunning animals. 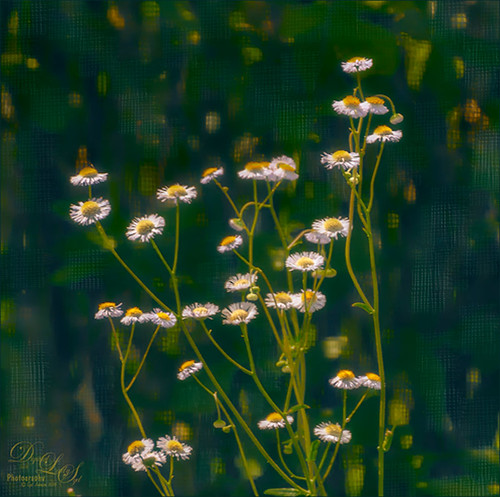 These little white wildflowers were growing on my back porch recently. There is no  texture in this image, just a screening effect that was behind them with green bushes growing behind the screen. Very little was done to this image. The same Topaz Detail 3’s Soft Leaves preset was used as in first image. Next the two Curves Adjustment Layers were added – the flowers were brightened using the Lighten curve and the background darkened some around the flowers using the Darken curve. On top a New Layer was created to add in more texture to match the screen effect – a basic cross-hatching brush was used to break up some of the flat color in the background. This flat effect seems to be a pitfall if too much darkening and lightening is added in large areas with the curves – everything can start to get a little bit murky in color if not controlled carefully. That is why a layer with some detail was added over it above and set to Screen blend mode at 39% layer opacity. It now appears more interesting and less flat to me.

There are many dodging and burning techniques. If you are comfortable with one of them, it is fine to keep using that technique. I believe the two curves technique is so popular because it is very easy and quick to do. I found it useful for a fairly large area(s) to adjust. For example, in the alligator image above, the alligators and the background were very similar in tone (and color in the color version) so a fairly large area needed to be slightly darkened behind the alligators to make them stand out. Similar issue for the flowers – the screen was very busy so by darkening the background and lightening the flowers, they stand out much better. If you need just a small area(s) darkened or lightened, use the Dodge and/or Burn Tools – they are pretty good in recent versions of Photoshop. (See Scott Kelby’s blog Using the Dodge and Burn Tools for more info on this.) My favorite for detail areas is one I blogged on a long time ago called The Best Dodging and Burning Technique!

Ben Wilmore, another Photoshop guru, teaches the ins-and-outs of Curves Adjustments better than anyone else. After trying out the two curves technique, I realized that I had used it several times before without realizing I was actually dodging and burning in the image! Ben said that using a Darken Curves Adjustment Layer can darken a sky, for example. Therefore, by setting the Curves Adjustment Layer to Luminosity blend mode, the colors will not shift but stay set at their original color. So if you are worried about a color shift resulting, just use Luminosity blend mode and there will be no change in color.

Some good recent resources on this technique are from Blake Rudis’s Everyday HDR video called Curves Layer Dodge and Burn in Photoshop. Also Julia Kuzmenko McKim uses it to retouch faces in a very natural way. Check out her wonderful, very detailed, 3-part article called The Ultimate Guide to the Dodge and Burn Technique: Curves Set Up and More.

I would suggest you give the Curves Adjustment Layer Dodging and Burning technique a try since it is very easy to do. I think you will find it to be a very handy and quick technique to have at your disposal! Chat at ya later!…..Digital Lady Syd

This entry was posted on 05/02/2015 by sydspix. It was filed under Photoshop and was tagged with Curves Adjustment Layer, Topaz Detail 3.