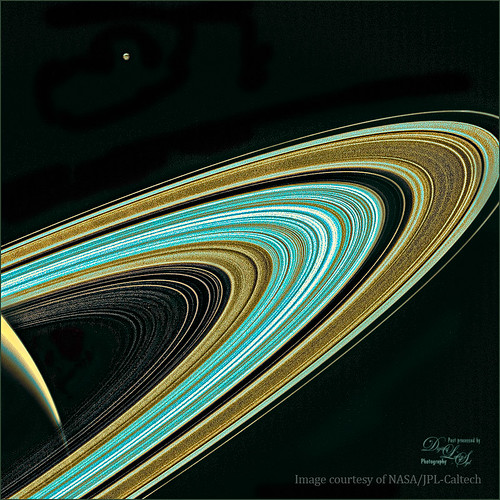 This beautiful image was originally a black and white taken on one of the last days of the NASA Cassini-Huygens Mission using its Wide Angle Lens. The Moon Tethys is in the upper left background. My original thought was to just try painting different colors into the rings to get an unnatural but pretty color effect. To my surprise, Topaz Studio using both Clarity and the new Detail adjustments were a quick answer to get the beautiful result.

Here is the workflow followed to get the above results:

That is all that was done to this image. It was a lot of fun and I love the results, even though the rings are not quite those colors. The point is that it took only a few minutes to do this image – no hand painting – it just picked up the colors. The Color Theme Adjustment did most of the color work and then Detail’s new Color Mixer Adjustment tweaked it a bit. 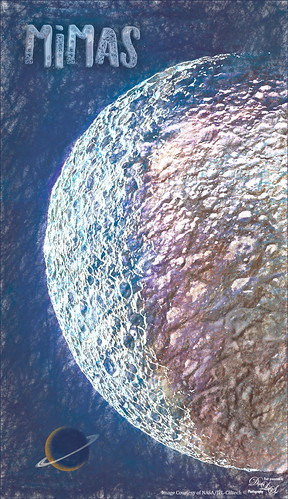 This updated Detail is much like the updated Clarity as it is also divided into two adjustments: Precision Detail and Color Mixer. Since it just came out, I do not have much experience working with all the sliders – the Channel Mixer Adjustment appears quite different from the original Topaz Detail 3 interface. But I am enjoying having the sliders available for quick use when needed. Here is a quick reminder of what some of the sliders do in the new Precision Detail Adjustment:

Sharpen – a new slider added – it does seem to add in more detail.

There is a new section called Lighting which contains sliders for Midtones, Shadows, Highlights, Black Point and White Point – same sliders from Detail 3 except the Midtones slider has been added and the Exposure and Contrast sliders are now removed.

The Channel Mixer Adjustment was also added to complete the update of the old Detail 3. It contains a totally new interface from the original Tone section that contained Cyan-Red, Magenta-Green, and Yellow-Blue sliders – these correspond to the Red, Green and Blue channels in this adjustment. There is also a Gray swatch which represents the Lightness of the image. I need to find out more on these sliders, but each have Red, Green, Blue, and Constant sliders. In the Adjustment Preset drop-down, there are several presets (Cloudy Evening, Faux Infrared Landscape, Red Contrast, and Red Green Switch) that can be tried out to see what happens with these sliders. A Maintain Brightness and Monochrome toggle switches were also added. Lot to explore here.

The image above is a composite of an upper and lower level NASA images taken in March 2017 from the same site. Topaz ReStyle was used to introduce the color palette. Topaz Studio’s Precision Detail Adjustment, Color Theme Adjustment, and Impression Adjustment were all used to get this almost poster like effect. For the Precision Detail Adjustment, a layer mask was opened and Luma was selected so just the moon was selected and the background was black – Luminosity slider 0.11 and Range 0.01. In PS Saturn was added in on separate layers with some brushes I had created a long time ago. On a final stamped layer on top, Nik Viveza 2 was used to soften the rough edges between the sharp shadow lines of the moon.

A couple of things I noticed – it appears that they are removing the older versions of the plug-ins in the Plug-ins drop-down and just adding them into the Studio Adjustment lists. Am checking on this as I would like to have the old ones still available. Also, there appears to be the original category preset choices on the left side that correspond to the plug-in being used by clicking on the drop-down menu under the Search field.

Try downloading some of the wonderful imagery from NASA and see if you can create a magical feel. Just remember all the beautiful Hubble images were originally black and white images and the colorization used is similar to what was created in this blog. Hope you have a wonderful weekend…..Digital Lady Syd

This entry was posted on 09/30/2017 by sydspix. It was filed under Astronomy, Photoshop Filter, Topaz Studio and was tagged with Astronomy, Nik Viveza 2, Topaz ReStyle.